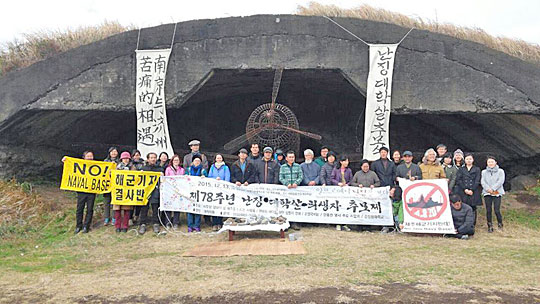 On Sunday, December 13th, 2015, the 78th anniversary of Nanjing Massacre, a memorial ceremony “Seeing Nanjing from Alddreu Airfield” was held in Alddreu airfield, Jeju island. The host organizations are “People to make Jeju the demilitarized Peace Island”, “Interisland Solidarity for Peace of Sea”, “Gangjeong International Team”. The associated organization is The Frontiers.

It was the 2nd time for people in Jeju to voluntarily hold the memorial ceremony. The ceremony location was the same with last year: in the hanger where a suicide airplane model was exhibited. Alddreu airfield is locating in a wide farming land. These lands has been unfairly expropriated by the Japanese navy and the airfield was build up by exploitation of the local labors during the Japanese colonization time. In this airfield, it was once fulfilled with so many bombing airplanes and these bombing airplanes were used to attack Nanjing city, the capital city at that time, right before the happening of Nanjing Massacre. The bombing can be said as one of the triggering incidents of Massacre which caused around 300,000 death.

And ironically, until today, the official land owner of Alddreu Airfield is still not the local people but the ministry of defense of South Korea. The local farmers has to pay the cultivation fee every year to rent the land for farming every year. In 1987, the ministry of defense of South Korea had ever cooperated with the US military to try to build up the US air base but due to the anti-base movement by the locals, the plan was failed. So, we can see the locals in Daejeong area held the history for peace. We and many locals hoped that the land of Alddreu airfield can be returned back to the local people, probably forming a peace park to memorize the historical lesson, and never be used for war again. Through this memorial ceremony for Nanjing Massacre, we reminded ourselves not to become the perpetrator of war crime again even unwillingly. It was a time when people tried to see the historical incidents by overcoming the role of simply victims.

Last year was the first time to hold the memorial event, and one of the Chinese journalist in Korea came to report this event. This year,the TV press in Nanjing visited our event directly to have the live broadcasting for this event. The 2 people from Nanjing greeted to the participants that “thanks for people come here voluntarily for this event to memorize the victims who were not even your own people.” 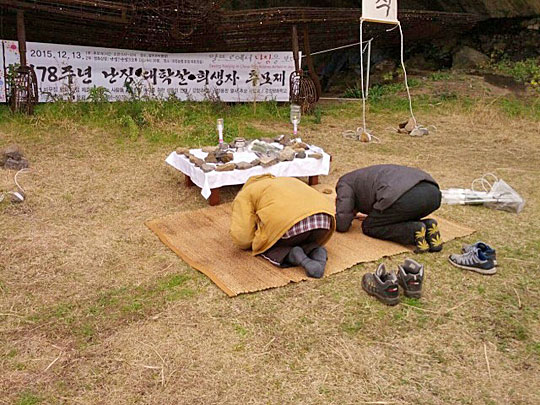