The Global Campaign to Save Jeju Island joins forces with Korean-American activists to call attention to failed Lee Myung-Bak policies. 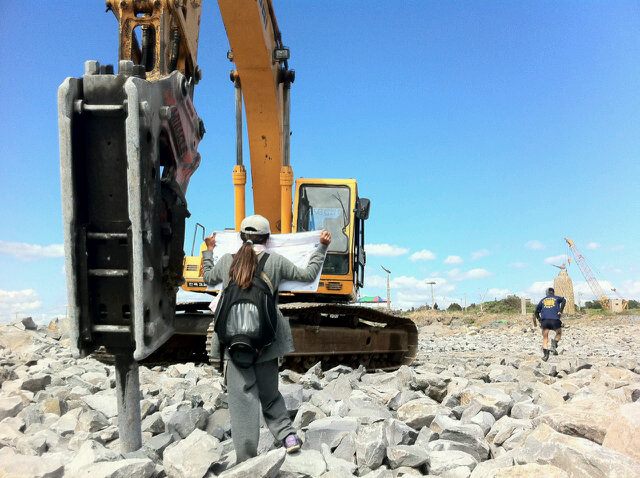 A villager in Gangjeong tries to halt construction

PRLog (Press Release) – Oct 11, 2011 – United States, Washington, DC
U.S.-based peace activists will assemble in front of the White House on October 13 as a signal to visiting South Korean President Lee Myung-Bak that his support for the illegal construction of a naval base on Korea’s Jeju Island is garnering international heat.

Since 2007, protests have occurred at the site of the proposed base, which would host up to 20 American and South Korean warships, including submarines, aircraft carriers and destroyers, several of which would be fitted with the Aegis ballistic-missile defense system.

South Korea started construction of the base in January but protests halted the work in June. Construction has again resumed despite democratic appeals for its halt, including one from the Jeju Provincial Council on Oct. 4 following a 22-day investigation into the procedures that set the plan into motion.

Just last week nine Catholic priests, a South Korean journalist and 11 college students were arrested as part of the Jeju naval base protests under the banner of violating Article 314 which is the penal code for „obstruction of business“ and is most often used to arrest and imprison trade unionists for exercising their democratic rights. Two hundred others have been called in for questioning by police not because they have committed any crimes, but because they are being targeted for their political beliefs and affiliations and for exercising their democratic rights.

Recently the Pan-Korean Committee to stop the Jeju naval base stated, “The police are indiscriminately and violently arresting and detaining not only the Gangjeong villagers and activists who protest against naval base construction but also clerics and news reporters, too. It is the police who have downfallen as the guards of the naval base construction, not minding the protection of the people’s basic rights such as the freedom of expression.”

Among those imprisoned is the democratically elected mayor of Gangjeong, the tiny fishing and farming village on Jeju’s south shore that is the site for the slated construction. The vote to authorize the installation of the naval base was decided by 87 people—some of whom were reportedly bribed—out of a village of 1,900 and an island of more than a half-million people.

Jeju Island, 50 miles southeast of South Korea’s mainland, is a pristine 706-square-mile volcanic island that is the site of three UNESCO World Natural Heritage sites. It was also the scene of a 1948 massacre by South Korean police and military forces of 30,000 civilians. In 2005, Roh Moo-hyun, then South Korea’s president, apologized for the atrocities and designated Jeju as an “Island of World Peace.”

U.S, President Barack Obama will host Lee for talks and a state dinner on October 13. U.S. House Speaker John Boehner has also invited Lee to address a joint session of Congress during his state visit.

Details regarding the Protest Lee Myung-Bak in DC rally can be found on the protest homepage www.ProtestLMBinDC.org