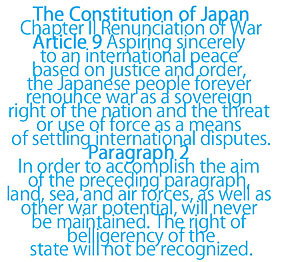 Article 9 of the Japanese Constitution and Peace in Asia
Prayer from Okinawa
March 6, 2021
Okinawa - Tokyo, Japan

Article 9 of Japan's Peace Constitution
Aspiring sincerely to sustain peace with justice and security in the world, the Japanese people forever renounce war as a sovereign right of the nation and the threat or use of force as a means of settling international disputes.
In order to attain this goal land, sea, and air forces, as well as other war potential, will never be maintained. The ferocity of belligerence of the state should not be recognized.

The Global Inter-religious Conference on Article 9 was launched as an interfaith initiative to pray for peace with justice, and to deepen our faith commitment for building a world without war in the spirit of the objectives of the Article 9 of Japan's Constitution, which is a "symbol for world peace." The Global Interfaith Conferences on Article 9 were held in previous years in 2007 (Tokyo), 2009 (Seoul), 2011 (Okinawa), 2014 (Tokyo), 2016 (Osaka), and 2018 (Hiroshima).

We, the one hundred and twenty participants who gathered to be part of the 7th Global Inter-religious Conference on Article 9 of the Japan's Peace Constitution, are from Japan, South Korea, the Philippines, Taiwan, Guam, Indonesia, Thailand, India, the United Kingdom, France, Germany, Canada, and the United States of America.

Many participants who attended previous conferences also attended the 2012 Inter-religious Conference on Nuclear Issues in Aizuwakamatsu City, Fukushima, which focused on nuclear power generation and its dangers to humanity. In the context of the COVID-19 pandemic, the 7th conference was organized as an online conference, with two key stations in Okinawa and Tokyo, Japan. On 2-3 March, 2021, we exchanged opinions on various issues related to peace and security in the world. We issue this statement from the 7th Global Inter-religious Conference on Article 9 with the hope that the whole world will realize peace with justice based on dialogue and mutual trust, and not with the use of force.

1) The COVID-19 pandemic has become a problem for the whole of humanity, which demands global solidarity of all peoples. The basic principle of the Sustainable Development Goals (SDG) is "to leave no one behind," and it is precisely this principle that will enable humanity to address COVID-19 through just and equitable vaccine distribution to all. Similarly, the nuclear crisis, climate change, and marine plastic pollution should all be addressed as challenges to humanity. No one should suffer discrimination, exclusion, or experience division from others in our common effort to address these challenges.

2) Okinawa was sacrificed in the World War II (Battle of Okinawa), placed under U.S. military rule after the war, and, as a keystone of U.S. defense preparation in East Asia, has borne a disproportionate burden of the U.S. military presence since the return of Okinawa to Japan in 1972. The government of Japan should take action, without delay, to mitigate the crushing burden of the U.S. military bases in Okinawa. We demand a halt to the construction of a new base at Henoko. In solidarity with the clear majority of Okinawans, we express outrage at government plans to use soil containing the remains of victims of the Battle of Okinawa as landfill for this new base. The withdrawal of the U.S. Marine forces from Okinawa should be the immediate priority to ensure peace and security in the region. We protest the growing deployment of Japan's Self Defense Forces (SDF) on the Nansei Islands and strongly oppose any deployment of intermediate-range nuclear forces upon Okinawa. Japan, the U.S.A. and the neighboring countries must never again create a situation that might draw Okinawa into war.

3) We are very concerned about the policy embracing a militarized right to collective self-defense, made by the previous Administration of Shinzo Abe, which violate the restrictions of the Constitution. Article 9 represents Japan's commitment to ensure peace in Asia, and the promise to never wage war again. For the same reasons, we oppose the concept of "first-strike against enemy bases." The proposed revision of the Peace Constitution of Japan will bring about serious instability, especially in the East Asia region. Japan must not become a threat to neighboring countries, nor a source of destabilizing peace and security. We call on the governments of nuclear-armed states that have not established "no first use" policies to do so. We also reject any attempt to use the “US Strategic Framework for the Indo-Pacific” as a pretext to revise Article 9 of the Constitution.

4) Sincere acknowledgment of Japan's aggression and colonial rule by the Japanese government forms the foundation of peace in the East Asia region. The Government of Japan should not only protect the Constitution, but uphold previous official Government statements that acknowledge Japan's past aggression and colonialism, such as the (Chief Cabinet Secretary) Kōno Statement of 1993, the (Prime Minister) Murayama Statement of 1995 and the (Prime Minister) Kan Statement of 2010. We urge Prime Minister Suga and the current LDP Administration to improve upon the previous administration's failure to clearly acknowledge responsibility and apologize for still-unresolved injustices and crimes committed under colonialism and war, such as the "comfort women" and forced labor issues, and to make appropriate reparations to victims. In this regard, the current issue of hate speech and discrimination against Koreans (as well as other minority communities) in Japan must be properly addressed if the government is truly remorseful of the past and desires peace with neighboring countries. We reiterate the statements from previous Conferences, that there should not be any attempt by Japanese government officials to pay homage at the Yasukuni Shrine, where class-A war criminals are hallowed.

5) Regarding "territorial" disputes with neighboring countries, we urge the Government of Japan to resolve these disputes in the spirit of Article 9, through dialogue and diplomatic negotiations. We also call upon each country to refrain from the use or threat of force as a means of settling such disputes, as this contravenes the letter and spirit of the Charter of the United Nations, and goes against the Japan-China Joint Communique (1972) as well as the Japan-China Peace and Friendship Treaty (1978). Unilateral action must not be taken to exploit natural resources in disputed areas, whether in the South China Sea or the East China Sea, as such actions hinder the values of "peace, dignity and equality on a healthy planet" promoted by the U.N.

6) Peace-building on the Korean Peninsula, together with preserving Article 9, is a key to peace and stability in Northeast Asia. We endorse the call for an immediate, formal declaration of the end of the Korean War and the signing of a peace treaty to replace the 1953 Armistice Agreement. To achieve these goals, it is imperative that the Democratic People's Republic of Korea, the Republic of Korea, Japan and the U.S.A. refrain from military actions that have repeatedly provoked hostility among neighbors. We urge both U.S. and Japanese governments to begin dialogue toward normalization of diplomatic relations with the DPRK, and call for a denuclearization of the Korean Peninsula that includes the removal of the USA's nuclear umbrella from the Korean Peninsula, the removal of U.N. and U.S. economic sanctions against the DPRK, as well as the dismantling of the DPRK's nuclear weapons. Related to the above, we appeal to the international community, including people of all faiths, to support the letter and spirit of the Korean peace process that began on April 27, 2018 at Panmunjom, as this will surely open up a new era for peace, security and co-prosperity in the Northeast Asia region based on respect toward the governments concerned.

7) Citizens' patriotic sentiments, media criticism and national self-interest can cause every government to shrink from its moral duty to engage in diplomatic dialogue. This is why it is important for citizens and religious communities of every country to interact, dialogue and promote peace across national borders. As the range of international citizen-to-citizen interactions expand, we hope and pray that the spirit of Article 9 of the Constitution of Japan, which renounces any military force, will spread among the world's people and nations until true peace, true security and true dignity is achieved everywhere.

8) Finally, we urge all nuclear power states including the U.S.A. to ratify the Treaty on the Prohibition of Nuclear Weapons, which came into effect on January 22, 2021. With this we can finally bring an end to the threat of nuclear destruction around the world, and also pave the way for a nuclear-free Korean Peninsula.

We issue this joint statement as a symbol of our commitment to building peace and moving beyond conflict.