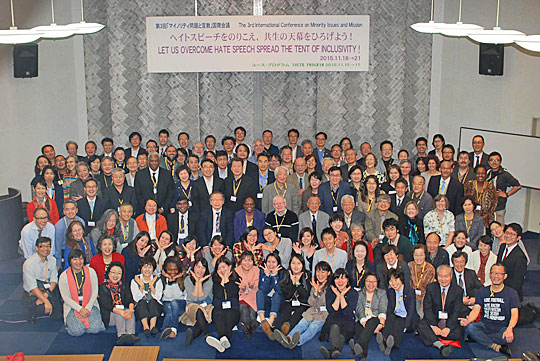 Some 200 people from more than 20 Japanese churches and minority right networks — as well as 20 overseas partner churches and organizations — gathered for a third international conference on minority issues and mission held 18-21 November at the Korean YMCA in Tokyo, Japan.

The conference, titled, “Let Us Overcome Hate Speech and Spread the Tent of Inclusivity,” was hosted by the Korean Christian Church in Japan. Participants dialogued around the theme of “Together Toward a Just and Inclusive Society in Japan – Justice and Inclusivity in Japan, in Partnership with all of Japan and the World.”

Keynote presenters included Prof. Hama Noriko, Doshisha University Graduate School of Business, who spoke about the socio-political context in which hate speech in Japan directed against the Korean ethnic community as well as other minority groups is increasing. Another keynote speaker was Niwa Masao, a lawyer who provided an historical overview of how the legal structures of Japan continue to allow for hate speech and historical revisionism to distort the facts. The main conference was preceded by a two-day youth programme in which 24 youth from 14 churches and organizations in Japan and from overseas partner churches learned about the challenges faced by minority communities in Japan.
The conference was organized by the Korean Christian Church in Japan (KCCJ) because of the alarming rise of hate speech against the Korean ethnic community in Japan. At the same time, discriminatory hate crimes against ethnic and racial minorities are on the rise in different parts of the world and racism has once again found a prominent place in many of our societies.

Speaking of the significance of the conference in the life and witness of the KCCJ, the Rev. Kim Byungho, general secretary, said, “We believe that hosting this conference is one of the constructive ways for our church to respond to the call for mission given to us by God. Many conflicts in today’s world stem from the discriminative policies and actions toward minorities, and specifically in Japan there is growing concern around the increasing militarization of Japan which has yet to fully acknowledge its past crimes and make necessary actions to amend the wounds. We hope this conference will provide an opportunity for the churches in Japan and the world to share our common concerns and build bridges of solidarity so that minority communities in Japan can fully realize and enjoy the fullness of life as citizens with equal rights, and it is the desire of the KCCJ to contribute to this ultimate goal.”

Conference participants talked about ways to engage the world church on this issue and also considered the possibility of creating an international network on the issues of racism and hate crimes.
In the opening worship, Metropolitan Dr Mor Geevarghese Coorilos spoke from Mathew 5:13, stating, “In a world that is marked and marred by a culture of death, degeneration of moral values of God’s reign, and corruption, minority communities, like salt, have the task to affirm and preserve life wherever life is under threat.” He continued to encourage the participants by concluding that the words of the gospel declaring we are the salt of the earth “should instill courage and commitment to be a transforming presence in a world that is corrupt and unjust, to identify ourselves with the margins and get dissolved in their struggles for a better and more just world, to resist forces of death and discrimination and to stand firm for truth and justice.”

Participants issued a statement at the conclusion of the conference in which they “confirmed that the Christian church must seek the path of peace that clearly opposes the path toward armament and war, and the path toward construction of an inclusive society in which peace and welfare are shared with all people, and that for this we must hear the call of Jesus Christ in the cries of minorities.”

Weiterführende Texte:
Full text of the Joint Statement of the 3rd International Conference on Minority Issues and Mission
Churches in Japan are witnesses of justice and peace
German conference pledges to strengthen work with churches in South Korea and Japan