The leadership of the National Council of Churches of Korea stands solidly against the construction of a naval base at Kang Jeong village on Jeju Island. In previous editions there have been reports of NCCK actions on this issue. On Sept. 8, NCCK General Secretary, Rev. Kim Young Ju, met with government Democratic Party leader, Son Hak Kyu, in a discussion of the Democratic Party policy on the situation around the Jeju Island/Kang Jeong Village /naval base construction. 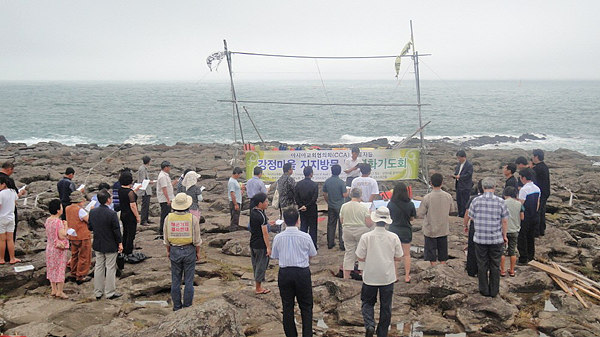 On Sept. 2, the police descended in force on the village to remove the leadership of the villagers’ protest. A group of about 40 people was arrested and spent the weekend in police custody. At the same time as the police were scuffling with the protesters that early morning, construction workers completed the total encirclement of the designated area with a high fence.