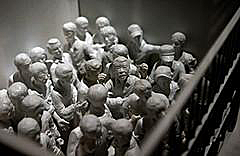 With sixty years passing since the Jeju Massacre (4.3 or 사삼) in which twenty-five to thirty thousand people died, a poignant, recently opened, memorial complex sits on the slopes of Hallasan. Chronicling the events of that time, it handles a sensitive subject that still resonates today for many residents and families.

The Japanese departure in 1945 and the ensuing power vacuum on the island saw the rise of various left wing groups that, according to one report, labelled Jeju a "red island" on which "ninety percent of residents have a leftist hue." Further, the practice "of using Jeju as a place of exile for minority political groups and governmental maladministration gradually built up on the island a separatist psychology."

This separatist psychology and tension continued to rise until it came to a head on March 1st 1948, in what became known as the "shooting incident": police opened fire on a crowd, killing six. Imprisonments and a general crackdown on the left began.

At 2 am on April 3rd, a full uprising began: "[It started] when members of the Jeju chapter of the South Korea Labor party began an uprising to protest against both oppression by the police and the Northwest Youth Association as well as a separate election and separate government in South Korea only."

Suddenly "Isolated Jeju Island [became] a massive prison and killing field," with wholesale "slaughter of civilians among the hill villages." Eighty-four of those hill villages have become "lost villages" today.

This theme of lost and unresolved history at the memorial hall begins after symbolically descending back to 1945 and viewing the white monument to April 3rd which sits deep in the recesses of the building. The roof funnels upwards to the sky and directly below sits an "unnamed" white stone as the Jeju Massacre lacks a proper historical definition.

Continue on and events are explained in Korean and English, complemented with a selection of documents and artifacts. One of the most interesting to see are reports commissioned by the American military government. The commander remarks: "I'm not interested in the cause of the uprising. My mission is to crack down only." There is also a full recreation of Darangshi Cave, discovered in 1992, containing the remains of many victims.

Upon completing the main building, outside are further memorials placed in the grounds. At the end of a dramatic wide open space, your eyes are drawn towards the memorial tower. Inside, the memorial altar enshrines the names of known victims. And, eerily, spaces remain for names yet still to be remembered.

Turning back to look out over the north-eastern coastal areas of the tourist island Jeju has now become, it's a little hard to imagine that sixty years ago it was a scene of incredible bloodshed. While the physical scars have been covered by the regrowth on Hallasan, they're still there under the soil and foliage. Then there are the aging victims and perpetrators that continue to harbor their memories. The April 3rd Memorial Peace Hall is a must visit for Jeju residents and visitors.

Opening hours and getting there:

The memorial hall is located on the eastern side of Jeju City, some kilometres inland. Public transport is lacking; therefore, a car or a motorcycle offer the best form. From City Hall, a metered taxi should cost around 15,000 won one way.