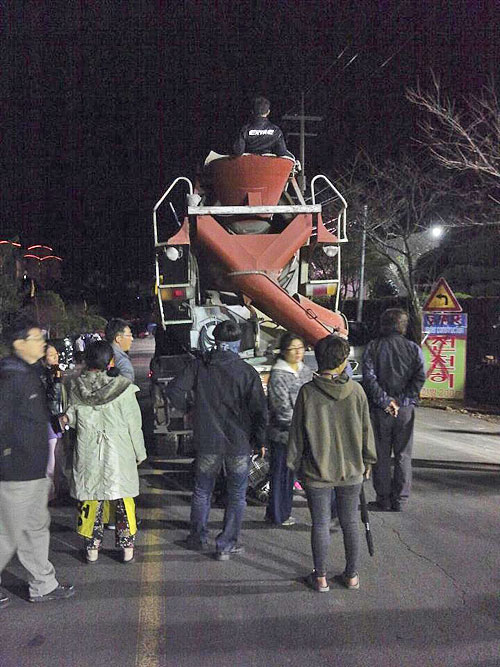 Photo by Paco Booyah, 'No sleep tonight in Gangjeong. An activist has climbed up a cement truck.
Activists and villagers are very angry at the police and navys absurd plan for 24hour oppression.'

Without police force, construction cannot be processed. It paradoxically means the Jeju naval base construction is a project of no justice.

Caisson production has started with the completion of the caisson production site in the naval base construction area of the Gangjeong village. And started as well is the police roughing out of villagers and peacekeepers for the entries of cement mixer trucks to be consumed for caisson production, regularly every hour for the whole 24 hours [on Oct. 25, 2012].

Since the police enforced roughing out people during the night when a range of vision is not perfect, the injured appeared one after one another. Only for last night, total three people were carried by emergency ambulances.

In case of Mr. Kim Hak-Koo, probably because of police's unaccustomed night sight around at 7:30pm, Oct. 25, the police threw down another victim on his body to the shock of all his body and trampled him down when they passed through to the pain of his waist that made inevitable of people calling an ambulance.

Mr. Kim Hak-Ku is a peace keeper who joined the non-violent human chain protest in front of the explosive company in Donggwang to stop the blast of the Gureombi Rock on March 19. At the time, he got the injury of bone-fracture above the wrist during the process that the police broke the human chain with hammer, which was supervised by Koo Seul-Hwan, Security director of the Seogwipo Police station. He had to endure cure of more than three months' period, during which wick was planted in his bone.

Also around 11:20pm, Oct. 25, the policewomen carrying Ms. Kim Eun-Hye, a peace keeper, during the process of roughing out people, happened to leave her head so she hit her head to the ground. Even though Kim was losing her consciousness for concussion and her limbs were cramping, the policewomen focused only to rough out her without considering to check her status and to protect her life.

She was eventually discovered by another peacekeeper and carried to an emergency ambulance. Fortunately it was confirmed that her concussion was a light one not harming to her life.

In case of Mr. Park Incheon (peacekeeper) who was carried by an ambulance around 2:30 am, Oct. 26, had been pushed and got the pain in his waist during the process when he protested to the double police roughing out in the already roughed out situation.

Beside the above, there are some people who have been intentionally pushed and fall down by the police even after police rouging out of them. Even though theirs were not developed into injuries, it was the protest site where the police do not keep even the minimum principals when they perform their job with physical force.

Article 3 (Basic principle) The Police, the civil service, should perform duties according to the following basic principles.

1. The mission of Police

The police, the civil service, have their missions that they fully perform loyalty and service for the state and nation, that they protect the citizens' life, body, and property, and that they maintain public welfare and order.

2. The spirit of the Police

The police as a mandatory of the citizens make a root of their mission with the spirit of fatherland-defense, service, and justice that respect the citizens' freedom and right in its routine job performance.

In violation of the police mission and spirit stipulated in the police public service regulation, the police are bringing the result of respecting the rights and interests of the contracted companies above the citizens' freedom, right, life and body.

During the National Assembly inspection on the government offices, this time, proofs on the illegal approval disposals [on the naval base project] and serious flaws in the base design have been exposed again. Further the base design has been done for the entries of the US nuclear aircraft carrier and submarines by the demand of the Commander, US Navy Forces of Korea. And numerous questions have been raised on the necessity of the project. Still Lim Suk-Kyu, the Jeju support policy director of the Prime Minister Office stated on Oct. 25 that the Government would only enforce construction after the dissipated Government joint presentation on the local development plan in relation to the Jeju naval base project.

There is no nation that makes a long life by oppressing citizens. We strictly warn again to the Government of Lee Myung Bak who is at the end of his term of the Presidential Office, to revoke the Jeju naval base project. Only in that way, it would no more commit crimes in the history. 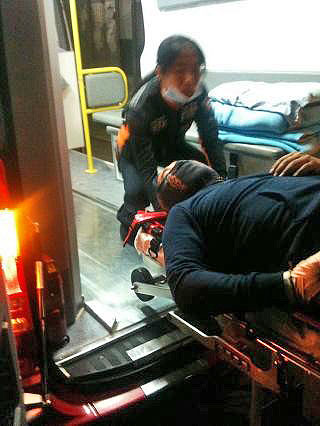 Image: Gangjeong village
Mr. Kim Hak-Koo is being carried by an ambulance 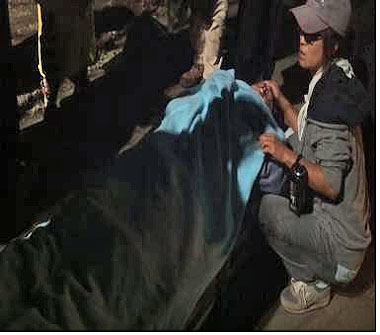 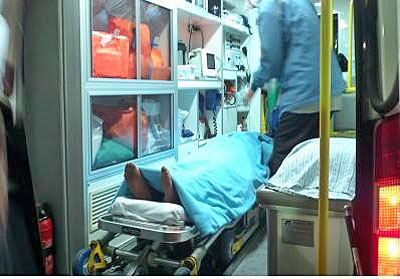 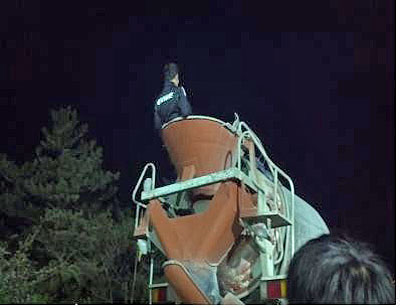 Image : Gangjeong village
A peacekeeper who is in protest on the top of a cement mixer truck. 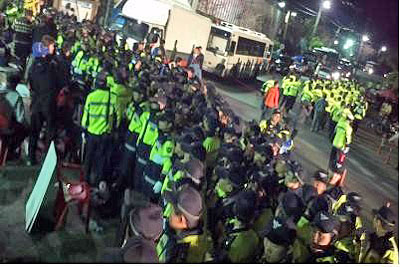 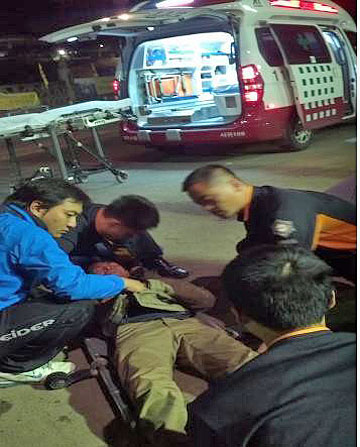 Image: Gangjeong village
It is the situation when Mr. Park Incheon fell down and ambulance was called. 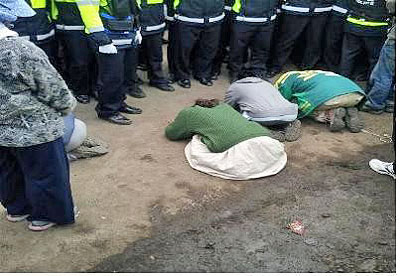 Image: Gangjeong village
The peacekeepers that were carried and roughed out during the 100 life and peace bows
are still bowing even after the police roughing out of them.

Summary of the video:

As we have concerned about very possible night incident, the 1st wounded occur. Two of the policemen fell down above Mr. Kim Hak-Koo. The 2nd (Ms. Kim Eun-Hye) and 3rd (Mr. Park Inchon) who would be carried to a hospital by ambulance were to occur by the late night. See details in the above.

During the candle vigil that is routinely done around 8pm in front of the naval base project gate, the police roughed out people even in the candle vigil, too, to the fury of village elders and people.

During the process of police roughing out people, the police say, "carefully,' and 'slowly,' but their real behavior against people is opposite. Even though a girl cries from pain, the policewomen consider only carrying out their duties.

When the video maker followed two policemen who were carrying the extinguisher, she heard that the policemen were using slanders against protestors, while the two were not being aware that she was following them. How dare they say they are there to protect the people!

In the 2nd hospitalized case of Ms. Kim, there is a village female elders' testimony on how the policewomen were careless to drop Kim then ignored her sickness.

To make pass one cement mixer truck, they mobilize hundreds policemen. They are the zombies, the video-maker says.

The police roughing out was done even during the peaceful 100 bows time in the morning of 6:50 am, Oct. 26. It was for the first time that the people in bows were carried by the police during the 100 bows. The people continued the bows even inside the circles that the police detained them temporarily to allow the cement mixer trucks to pass through the gates, without people's obstruction of them.

The video maker herself was injured in one of her toes, too when the policemen accidently trampled on her foot as well. There are always bruises and injuries of people during the field protests, even though they might be small.

According to the Jeju Sori, the 24 hour construction is for the Daelim Co. to produce 80 numbers of 3,000 ton caissons that would be produced in the giant steel mold recently built on the blasted part of the Gureombi Rock coast (west of the coast). The caissons will be used to construct the east breakwater and mooring docks in the 1st work area.

The Daelim-made caissons are different from the Samsung C & T that produces 9,000 ton of them in the Hwasoon port (abou 40 minutes car distance from Gangjeong) then moves them into the Gangjeong coast.

Jeju Sori says: 'Originally the Daelim planned to start to produce caisson from June this year, but it has been delayed as various problems have occurred." You can say people's protest have been a big part of it.