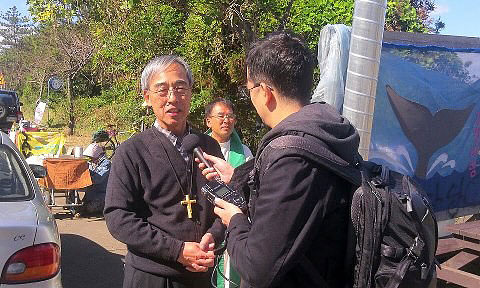 Bishop Kang U Il visited the village. interview with an international reporter

Around 4:30 another police roughing out. For 4~5 detained women, there are only three policewomen shown in the photo. The others are policemen who walled against us with multiple layers. The policewomen were to exit often but we protested to them so that they should be with us.

Around 3: 30 pm nov 1 another police roughing out. I saw at least two young female activists had tears in their eyes... many women peace keepers are upset when they are circled around by male policemen. The policewomen are insensitive to the same women peacekeepers. Why they are so slow when women need them? Scratch by policewomen nails have been usual... male peacekeepers commonly appeal pain in their right shoulder. Two of them have been carried by ambulance for it. The photo is the scene that the police take apart people in front of construction gate. 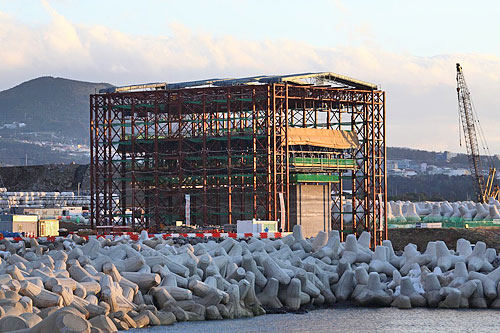 It was Oct. 30 that the first 3,000 ton caisson supervised by Daelim Co. was made on the Gureombi Rock. To build this one, there was 24 hours construction since Oct. 25. No night construction for three days of Oct. 30, 31 and Nov. 1, as the workers needed time to dry it, move it to the coast near to a floating dock on the sea, and resetting for building new one.

What was the cost of the 1st caisson? The navy-contacted company, Daelim plans to build 82 numbers of 3,000 to 4,000 ton caissons to put into the Gangejong Sea, the UNESCO-protected soft coral zone. Given that it takes 5~6 day to build one, it needs minimum 410 days' 24 hour construction because of cement character, no choice, the navy says.

However, villagers' rights to sleep in the night have been robbed off. It was at the price of human rights violation. There have been at least 6 people who were carried to hospital during 24 hour construction so 24 hour protests from Oct. 25 to Oct. 30.

Many were injured, too. The waste of tax to mobilize 500 policemen every night is speechless. If it was a righteous and reasonable construction, the government does not need to mobilize such stunning numbers of policemen. It is for the navy to get the budget on the naval base project, 2013 (the Ministry of National Defense has proposed 200 billion won for the Jeju naval base construction in 2013) by rapidly moving up construction (destruction)! The navy has promised the National Assembly last year that it would not get the budget if its work rate does not reach 30 % this year.

A clear violation of the EIA to the concern on soft coral, a Jeju environment group states.

Amidst 24 hour construction that started on Oct. 25, 2012, the Jeju media reports on Oct. 29, 2012 that the Korean Federation for Environment Movement (KFEM), Jeju, stated on the same day that:

"As the navy enforces construction with unreasonably accelerated process, it ignores most of consulted contents in the Environment Impact Assessment [..] The construction site in the coast of the Metboori (east tip of the naval base project) facing the Beomseom (Tiger Island) less than 1 km from it is covered with muddy water and the silt protector layers installed to supposedly block such contaminated materials during construction were damaged and useless."

The Beomseom (Tiger Island) itself is the UNESCO Geology Park (Oct. 2010). The vicinity sea area of it is a UNESCO biosphere reserve (2002) and ROK government-designated natural memorial No. 421 (2000) for the soft coral habitats 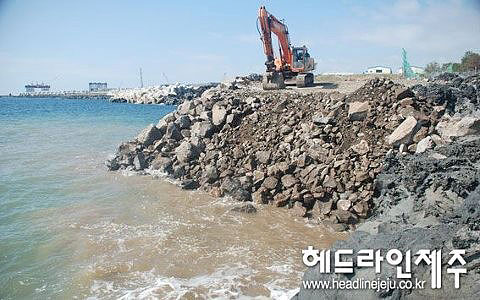 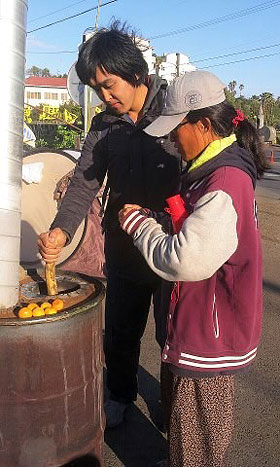 after police roughing out, eating roasted tangerine is a joy though... they are hot

A villager, Yoon Chung was released from the 44th days in jail.

Villager Yoon Chung who has been jailed since Sept. 11 under the charge of damage on private facilities was released on Oct. 24, with the fine of 2.5 million won. It was his 44th day in prison.

He was jailed on Sept. 11 when he being drunken broke the glass doors of a pro-base shop people in the village. It is known that he is one of the villagers to have his land victimized because of the naval base project (The navy forcefully expropriated 49% of the villagers' land with much cheaper price. Please come by later for the details on it.).

Prof. Shin Yong-In, a professor at the Law School of Jeju University and an advisory lawyer to Gangjeong village, has cited an article of the Seogwipo Daily News, Sept. 17, 2009:

'According to the result of the 'mental health condition,' that the Seogwipo Daily newspaper researched on the Gangjeong villagers from Sept. 2 to 11, 2009, people that were described of mental abnormality such as antagonism feeling, depression, anxiety, compulsion occupied about 75.5 % of the whole villagers. Among the views on the mental abnormality, antagonism feeling was the most. About 57% of the whole villagers were suffering seized with antagonism. The people who feel suicide impulse reached to 43.9% of the whole villagers, which is 5.4 times higher, compared to 8.1%, the average value of suicide impulse of the Jeju Island people. In fact, the villagers who responded that they have attempted to commit suicide or have planned were 34.7%. Because of the Jeju naval base issue, the villagers' mental status has become devastated.'

The village that has been proud of more than 450 years community by which they kept their traditional forms of respecting elders and caring children has been broken apart with the naval base project that has sneaked into their village in April 2007. Majority of the villagers are still infuriated that small sum of the villagers were bribed by the navy and sold their village to it at the time.

It is remarkable that the villagers have been making very hard efforts to recover their community since this year, such as through May 18 Parents Day which was interrupted by the navy again.

On June 20, 2012 when there was a forum on the measure on the victims of the April 3rd massacre and uprising(1947 to 1954), some panelists have raised a issue on the Gangjeong villagers that the villagers whether pro or anti have the right to use the trauma care institute since they were all the victims of the state violence.

Schedule updates to the Grand March for Peace and Life

The Grand March of Life and Peace which started in Gangjeong on October 4th runs til November 3rd where it ends at Seoul City Hall Plaza. At the link below is a more detailed schedule for Tomorrow (Thursday, October 25) until the end. Please come out if we are in your area and tell your friends to join when we pass their area! And remember to check our photo section every night for pictures from each day's march.

Daily struggle has delayed 28 billion won. Help to cut all the budgets on base!

[..] The construction (destruction) is being accelerated with the completion of the giant caisson prod...

uction frame on the Gureombi Rock coast. It is told that the contracted companies finished test operation for producing caisson on Oct. 23. Caissons that need more than 450 ton cement mixer truck for one by filling the giant mold frame with cement will be rapidly produced soon. About 200 workers from the Vietnam and Philippine will be brought into the construction site with cheaper wages to be exploited for 24 hours. [..]

It is told that the navy has requested more policemen to enforce construction for 24 hours! The people's struggle will be then for 24 hours in shift, too! Even the policemen think the navy is crazy. It is expected that the numbers of the policemen will increase at least by the end of this week: From about 250 (3 police companies) to 500 (6 police companies) daily. The government has been pouring the people's tax to enforce this illegal construction (destruction). 24 hours police watch, seldom precedent since the military dictatorship of Park Chung-Hee during 60s and 70s.[..]

Despite all those, it is encouraging to hear that as of September, the navy could use only 50 billion won of the 107 billion won allocated for the base project budget, 2012, which has law-evasively been transferred from last year. The navy has planned to use 78 billion won by September. The not-executed 28 billion won is what the field protesters could bring for all of us. Their daily dedication is bringing the result.

How you can help them? Please pressure the ROK National Assembly members to cut all budgets on the Jeju naval base project .( *The government says that the total cost for the Jeju navy base project is about 1.7 trillion won) For example, ENGLISH@ASSEMBLY.GO.KR or Moon Jae-In, Permanent Advisor, Democratic United party, Presidential candidate: moonriver365@gmail.com.