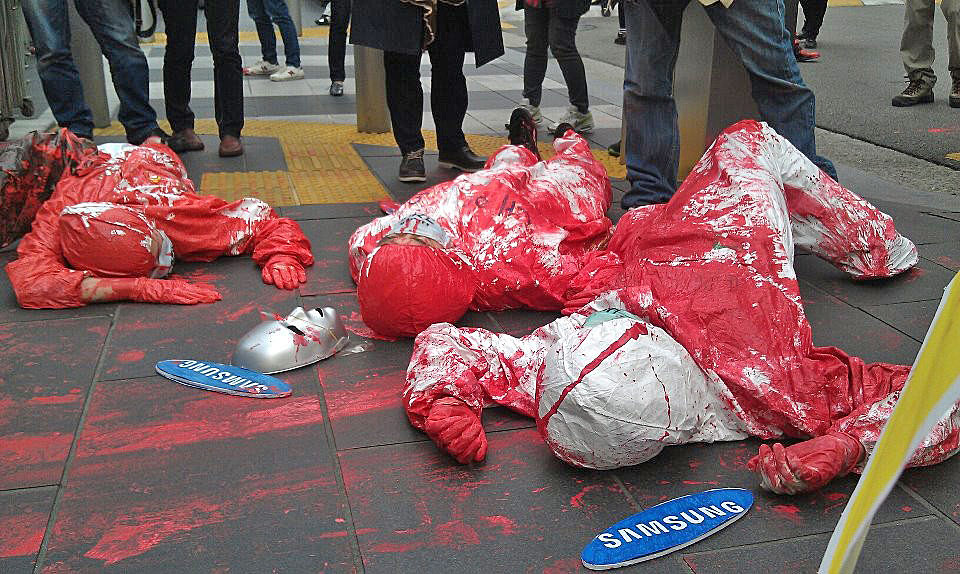 On March 26, Mayor Kang and peace activists set up a tent in front of the Jeju-Island government hall and started a sit-in protest demanding the governor of Jeju Island to command the Navy to halt the naval base construction (destruction). However, sit-in tent was violently pulled down by police and civil servants of Jeju Island government. During the clash, the police dragged a tent with women in it 5 meters down the street and a woman injured her head. Since then, people have maintained daily sit-ins there on the cold street without a tent.

Meanwhile, the Jeju Provincial Government called for the Navy to stop blasting Gureombi Rock until the hearing on 12 April. The hearing itself has been delayed twice from March 22 to March 29 and then again until April 12 further raising the people's fury. On March 27, the villagers demanded that the Jeju island government should not join the verification meeting claiming that the agreement between the Island government and the Navy to have meeting was based on a partial report for which simulation had been ordered by the Samsung C & T.  Meanwhile the navy, ignoring the provincial government's call, continued to enforce construction (destruction) including the blasting of the Gureombi Rock.

Confrontations between the people and the navy/ contractors at the construction gate continued daily, as well, regardless of poor weather, such as heavy rain. The police used excessive force to put down the recent protests. On March 29, Lim Ho-Young, the village media team leader, was arrested by police under arbitrary charges, hit in face, while protesting the illegal photo-shoot by the police. Even male police officers lifted women activists' arms and legs to disperse a demonstration. This is against the regulations defining the duties of the police.

At the same time in Seoul, there was a nonviolent action against Samsung's blasting of Gureombi rock in front of the Samsung C&T building. Peace activists identifying themselves as "I am Gureombi", poured red paint in their white clothes to symbolize the Gureombi Rock's bleeding. They were arrested right after the action and the Samsung presented the data to the police that 24,000,000won (around 21,000 USD) worth of damage was done.

Commemorating the 64th anniversary of the Jeju 4.3 Massacre, there were several big rallies in Gangjeong village, such as the 10th visiting rally of Gangjeong village organized by Korean Civil Society for Opposing to the Naval Base in Jeju Island and a workers' rally organized by the Korean Confederation of Trade Unions. The central-government backed ultra right wing was mobilized on both days of March 31 and April 3 but people kept them away from entering village.

On April 1, Sunday, People tried to penetrate into the Gureombi Rock and around 30 people succeeded in gaining access to the cordoned area. Police used liquid tear spray guns to stop demonstrators and forcefully prevented people putting kayaks on the sea. Nine people including some key activists were arrested and injured. Especially Dr. Song Kang-Ho who entered the Gureombi Rock crossing wire razor was eventually carried by a navy jeep and police took him outside. Dr. Song was severely injured when he resisted his arrest. Three of his teeth were broken. The police violently hit him in the belly and other areas as he was transported in a police car from the Gureombi rock to the police station. He eventually received stitches underneath his chin in the hospital, and was then transported again to the police station despite lawyers' protest.

On April 2, all the religious denominations came to the village to support and join people's struggle. On April 3, the Presbyterian community broke the fence, entered the Gureombi Rock, and held a sit-in by around 2am in the night in front of the naval base gate despite severe wind and cold weather. Dr. Song was sentenced to prison.

The Lee Myung-Bak government's denial of entry to international activists has continued. Following the March 26 denial of a Japanese education worker and her daughter, Mr. Ryuji Yagi was denied entry with no reason given on March 31. Yutaka Umiseto from Okinawa was also denied entry on April 2. It had been planned that he would join the Jeju city-held evening festival before the anniversary day of 4.3. Irrespective of the impediments, a member of Veterans for Peace, U.S. and two Japanese female activists were present to express solidarity with the people in Jeju at a Jeju 4.3 Massacre commemoration candle vigil in Jeju City.

On April 2, three Greenpeace personnel were also denied entry. International Executive Director Kumi Naidoo denounced the South Korean government, "South Korea can't pretend to be a player in the discussion on global climate change and environment protection while being silent on criticism of its nuclear policy."  The Lee Myung-Bak government hosted Nuclear Security Summit meeting, which is in fact a pro nuclear MD policy summit in Seoul from March 26 to 27. Considering that the Jeju naval base would be a forefront staging point for a US military alliance attack on China, its significance to the Jeju naval base project cannot be ignored.

26 March: Mayer Kang and other peace activists set up a tent in front of the Jeju Island Provincial Government Hall and initiated a sit-in protest but were violently suppressed with a injury to a woman's head

27 March: Gangjeong villagers stated that the Jeju Island government should not join the verification meeting as the verification would be based only on the partial report of which the simulation-ordering client was Samsung C & T.

28 March: Gangjeong villagers held the press conference to condemn the Jeju provincial government for its postponing the hearing and demanded again to order navy on construction halt.

29 March: Lim Ho-Young, the village media team leader, was arrested by police while protesting the illegal photographing of demonstrators by police. Meanwhile in Seoul, there was a nonviolent action against Samsung's blasting of Gureombi rock in front of the Samsung C&T building.

31 March: 10th visiting rally in the Gangjeong village organized by Korean Civil Society for Opposing to the Naval Base in Jeju Island.

1 April: Workers' rally in Gangjeong village was organized by the Korean Confederation of Trade Unions. Police used liquid tear spray for the first time in people's protests against naval base. Nine people were arrested. Dr. Song Kang-Ho was greatly injured while the police enforced his arrest

3 April: Pastors entered the military construction site breaking through the fence in the early morning, five pastors were arrested. A Catholic tent was demolished. Veterans (victims of Agent Orange during Vietnam War) pro-base rally was held. Candle vigil in Jeju city was held on 64th anniversary of April 3 Jeju Massacre. Pastors held sit-in at the gate of naval base site, staying by around 2am in the night.

1. Please take some time to write protest letters to the government and the naval base planners and contractors, demanding an end to the 2nd 4. 3, blasting, construction, and violation of human rights.
Appropriate addresses can be found here:
https://app.e2ma.net/app/view:CampaignPublic/id:33867.7483820829/rid:c5c744865a7b372e77e36ea5fb216220
http://www.secc.co.kr/eng/html/customer/contactus.asp  (Samsung C & T)

2. Please write a letter to Woo Keun-Min, Island governor, to stop the 2nd 4. 3, to order the halt of the construction; to revoke the navy license for reclamation of the coast and sea in the base project area; and to restore the absolute preservation area that was annulled for the naval base project through undemocratic procedures in 2009. Also please demand that he give a sincere apology to the people attacked on the night of March 26th.

These actions will really help to stop the on-going destruction being caused by the naval base project.
Mr. Woo Keun-Min, Jeju Island Governor:  kmj5369@jeju.go.kr  or jejumaster@jeju.go.kr

3. Please also consider signing the petitions on Avaaz (http://www.avaaz.org/en/save_jeju/?vl) and distributing this letter among your networks.
For more immediate situation updates, join the facebook group,'No Naval Base on Jeju'.
This newsletter/appeal is updated every week.
Thank you,
The Extended International Team of Gangjeong Village
April 3, 2012