Repeal the deportation order against Benjamin Monnet and Angie Zelter!

On March 14th, Jeju District Public Prosecutor's Office released 13 who had been arrested two days before, but requested an extension for the arrest of Ms. Seri Kim. At around 4:00 p.m., they transferred the French activist, Mr. Benjamin Monnet and the peace activist from the U.K., Angie Zelter, to Jeju Immigration on the basis that they would decide on deporting these two activists.

Lawyers for Democratic Lawyers' Association, along with the Gangjeong International Team had previously met up with the three individuals at 10:00 a.m. Ms. Seri Kim was wearing a neck support for the injury that occurred when two Daerim contractors violently restrained her. In addition to her neck pain, Ms. Kim complained of pains on her left shoulder and also on her knees. The toes on her right foot were also twisted, according to her. At 2:00 p.m., Mr. Benjamin Monnet visited the local hospital, also complaining of the pains caused by injury when Daerim employees pushed him: on his legs; the back of his neck; muscle pains on his upper and lower back. The inside of his left knee occurred when Jeju coast guard overturned Mr. Monnet's kayak and rapidly advanced the guards' rubber boat. Doctor said it will take two weeks for the injury to heal completely.

On March 12th, both Ms. Seri Kim and Mr. Benjamin Monnet had crawled under into the barbed wire side of the Gureombi rocks, where they sustained 2 and half hours on an excavator, in order to avoid potential violence from the Daerim employees. As for Ms. Angie Zelter, she had cut the barbed wire—installed illegally by the Korean navy. The Police charged Ms. Kim for obstruction of business on March 12th, as well as for obstruction of traffic on March 7th—she had held out in front of the vehicles, which belonged to those who set barricades, to stop the blast). For Mr. Monnet, the police charged him with: unlawful interference with official duty (for the event that occurred on Feb. 27th); misdemeanor, infliction of injury, obstruction of business (March 12th). For Ms. Zelter, misdemeanor for entering into the construction site over the fence (March 9th); so called group damage with dangerous tool (* which means wire cutter to cut the wire razor fence) and misdemeanor (March 12th). 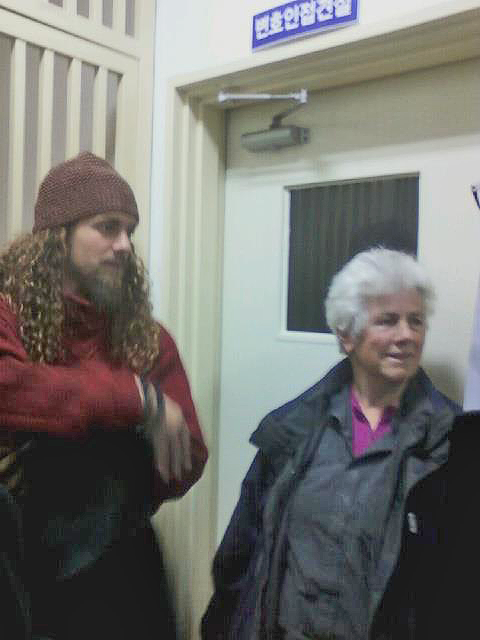 All these allegations are arbitrary and malicious interpretation/application of the law, considering the customary violence against the villagers and activists who protested against the naval base construction. No action has been taken towards Mr. Benjamin Monnet's lawsuit against Daerim employees and the police respectively—Mr. Monnet was beaten on Nov. 9th 2011 by Daerim employees; and by the Police on Dec. 26th, 2011. On April 6th, 2011, despite the police assault against the film critic Mr. Yang Yoon-Mo, no investigation so far, as for the accountability. Mr. Monnet only pushed the policeman in order to protect himself, rather than injuring the police as he had been charged as such. As for the charges that were brought upon himself regarding the incidences on Feb. 27th and March 12th, Mr. Monnet strongly claims that they are lies and excessive charges.

On March 6th, Jeju Provincial Governor Mr. Woo Keun-Min, jointly with representatives of Jeju—both the ruling and the opposition parties—had requested the provisional pending on the Gureombi blast as well as for the construction itself, expressing regrets at the unreasonable execution of the construction with all the design errors. But the navy, ignoring the needs of these Island representatives forged ahead with the blast to destroy Gureombi—Korea's one and only costal wetland and the bedrock inhabited by where rare flora and fauna; an area that deems to be connected to Gangjeong Stream that provides 70% of drinking water to Seogwipo residents. The construction site is the country's only UNESCO soft coral habitats and also where Indo-Pacific bottlenose dolphins make appearances, which are designated by the IUCN (International Union for Conservation of Nature) as endangered species.

The three individuals—Seri Kim, Benjamin Monnet, and Angie Zelter—devoted themselves through consistently non-violent and peaceful measures under international law: the principles of peace: against the construction of naval base and militarization, they simply tried to prevent the destruction of the Earth through another military base.

But the Jeju Immigration Office, after investigating nearly three hours ordered deportation for Mr. Monnet at 8:00 pm, when ten Immigration Office employees entered the office. Female employees, as if they had been prepared to do so, started collecting evidence with their cameras. The three-hour investigation on Mr. Monnet was all an act. Lawyers for Democratic Society representative, appalled by this, urgently raised the complaint but the staff arbitrarily transferred Mr. Monnet, unfed and still in his prisoner's uniform. Their excuse was being that Mr. Monnet should be on the last flight out of Jeju. 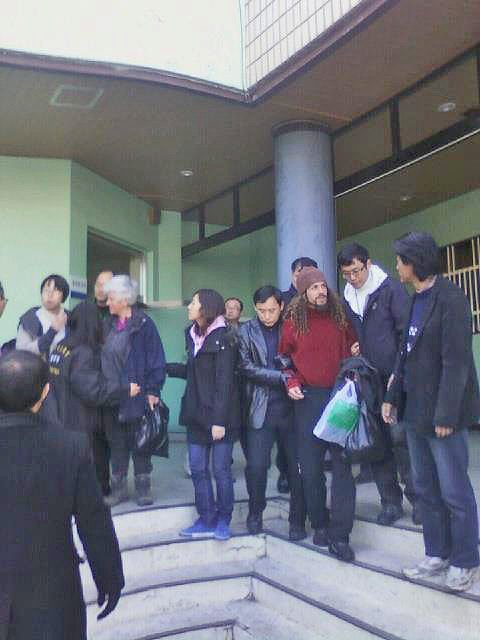 Angie Zelter, who is also confined at the Jeju Immigration Office will be investigated around 3:00 p.m. on March 15th. Around 11:00 am or 1:30 pm, Seri Kim's case will be examined to issue an arrest warrant against her. In solidarity with the film critic Mr. Yang Yoon-mo, Angie Zelter is temporarily fasting. Benjamin Monnet is also fasting in the prison of Hwasoon Immigration Office, Gyunggi province against illegal destruction of the Jeju naval base project and illegal arrest.

We strongly condemn the Lee Myung-bak government who, in addition to the illegal construction (destruction) and arrests, is forging ahead with the forceful deportation of international activists who are dedicating themselves to protect the Island of Peace, Jeju. Lee Myung-bak regime's human rights abuses are unscrupulous, as it ignores the potential diplomatic criticism. In addition, the construction and the human rights violations in relation to the construction cannot be explained without the United States' undue desire for domination as it tries to utilize the Jeju naval base as a springboard to contain China. It is also the move to undermine the international solidarity against the Jeju naval base construction. The struggles against the Jeju naval base construction has already evolved into international struggle. Capitalism and government and any other forces that resist the contemporary needs for peace cannot be sustained.

We have just heard that the entry by the three members of the Veterans for Peace, US. Who were supposed to visit the Gangjeong village on March 14 has also been denied. We strongly denounce the Lee Myung-Bak government who shamelessly commit violation on human rights internationally.