15.10.2011
Statement in support of Jeju opened for signatures from Mayors for Peace members
(= Bürgermeister für den Frieden) http://www.2020visioncampaign.org/en/home/artikel/8bb4a7e232/statement-in-support-of-jeju-opened.html
Mayors for Peace has welcomed Mayor Kang Dong-Kyun as a new member of Mayors for Peace. Mayor Kang is still in jail for his non-violent civil disobedience against the construction of a new huge naval base. Mayors can now express their support through this 2020Vision Campaign webpage. Thank you for taking action!

Mayors:
The 2020 Vision Campaign makes available to the members of Mayors for Peace a Statement by which you can individually and collectively express your support for the struggle of Mayor Kang and the citizens of Gangjeong to prevent their village being transformed beyond recognition by a large naval base capable of hosting nuclear-armed submarines.

Click here to read and sign the Statement.
http://www.2020visioncampaign.org/en/home/artikel/8bb4a7e232/statement-in-support-of-jeju-opened.html
Once it has its first 50 signatures it will be delivered to Mayor Kang. We will then regularly update the list of signatories here. Please send the signed Statement back to 2020visioncampaign[at]ieper.be

Citizens:
The members of Mayors for Peace have been informed of this statement and urged to sign it. Mayors are very busy people and may not always have time to focus on something happening in another city or country. But if a constituent (you) asks him/her to sign, he/she may happily devote a few minutes to signing.
(Your Mayor is not a member? Please click ‘Join Us!’ in the website banner.) 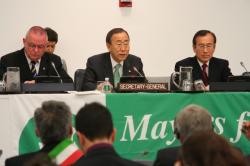 Statement in support of Mayor Kang

We are shocked at the devious and heavy-handed methods being used to violate the will of the people of Gangjeong Village, Jeju, South Korea. We have great admiration for their Mayor, Kang Dong-Kyun, who, for four years, has been doing everything he in his power to ensure that the will of the villagers is respected.

In contradiction of the island’s official motto: ‘Island of Peace’, the South Korean navy has been trying to build a base on Jeju Island for many years. Already two villages, Hawsoon (2002) and Weemee (2005), have rejected hosting the base. In Gangjeong, a corrupt mayor was willing to deliver his village to the navy in 2007. On very short notice, he called a village meeting at which he pushed through a decision to ‘welcome’ the base. In a village with an electorate of just over 1000 people, less than 100 participated in this momentous ‘decision’. As soon as the rest of the villagers learned of this maneuver, they ousted the old mayor by a vote of 417 to 15 and then decided to make the ad hoc civil society campaign against the base an official activity of the village. On that basis, they overwhelmingly elected Mayor Kang, who has led the struggle ever since. On August 20th, 2007, the village, in a democratically conducted vote, opposed the base’s construction by 680 votes to 45.

Villagers were told in June 2007 by Kim Sung-Chan, Director of War Power (currently Chief of Naval Operations), that the navy would not expropriate villagers’ land. Despite purchases from absentee landowners, resort owners, and a few villagers, the government was not able to achieve even fifty- percent ownership. More than half of the land in Gangjeong is owned by local people who refused to sell it to the Government. In 2010, the government began expropriating land anyway. Residents were told that if they did not collect their ‘compensation’ within two months from the time of expropriation, they would not only lose their land but would also be charged overdue fees on their ‘transfer income tax’.

When, in January 2011, construction began on the base despite all of these irregularities, villagers felt that they had to intervene before their farm lands and fishing waters were destroyed. Using strictly non- violent means, they have successfully impeded progress. However, the Government continues to escalate its pressure on the villagers, arresting and imprisoning its anti-base leadership, including Mayor Kang.

Jeju is a UNESCO triple-crowned site, as a Biosphere Reserve (2002), World Natural Heritage Site (2007), and Global Geopark (2010). Throughout Jeju, the area around Gangjeong is renowned for having the finest water quality both on the land and in the sea. Ongoing archeological excavations reveal that this naturally rich area attracted human inhabitants already in the Bronze Age. We cannot be indifferent to this unnatural and illegal assault on Gangjeong and Jeju.

Mayors for Peace members are opposed to nuclear weapons and the extraordinary threat they represent to humanity. There are currently no agreements barring the entry of nuclear-armed submarines into South Korean Naval Bases; such visits used to be commonplace and could resume at any time. Under these circumstances, we support the demand of Mayor Kang and the citizens of Gangjeong that the South Korean Government should hold a supervised vote of the villagers on construction of the base and pledge to respect its outcome.