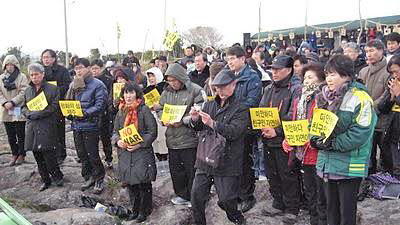 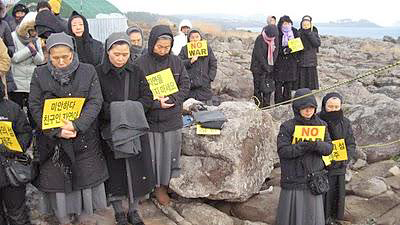 As I write this the people of the Gangjeong village on Jeju Island in South Korea are in the midst of the fight of their lives. It is today that they face down the Navy and the plans to destroy their sacred coastline for the Navy base where U.S. Aegis destroyers (built here in Bath, Maine) will be ported.

As I write this they might be sitting in the road trying to block the construction machinery from beginning work. They might be getting arrested in large numbers. They are so isolated and few around the world know anything of their struggle to save the rocks, the water, the coral, the fish and their way of life.

On Christmas day a Catholic mass was held for the villagers along the rocky coastline by the Bishop of Jeju Island. Below is the latest report we got from Global Network board member Sung-Hee Choi who has been at the village for the last couple of weeks standing with the people and helping to spread word about their fight to others in Korea and around the world:

In the Joongduk coast - the planned naval base area - snowflakes fell onto the beautiful coast rocks and sea, as well, displaying a mysterious view as the sea horizon became clouded. It was a terrible feeling to think that the most beautiful rocks and sea in the Jeju Island might be covered with concrete if the naval base construction is enforced.

At 3:00 pm, there was a peace mass, called, âthe Christmas missal to save life and peace of the Jeju Island,â lead by Fr. Kang Woo-Il, Chairman of the Catholic Bishopsâ Conference of Korea & the Bishop of the Catholic Jeju district, along with many fathers and nuns in the Jeju island. The event was hosted by the Special Committee for the Island of Peace, Catholic Jeju district. About 400~500 followers and Gangjeong villagers gathered and represented their will to save the Jeju island of Peace from the naval base construction.

Bishop Kang Woo-Il led the mass and said, âMilitary base cannot save peace and lifeâ and that he âwould be together with the lonely and oppressed Gangjeong villagers.â


The least we can do is to let others know about this terrible moment so that the valiant struggle of the Gangjeong villagers is not done without the world knowing about it. Please pass on word about this and also call the South Korean embassy in your country and protest the construction of the Navy base for U.S. warships on Jeju Island.

As you can see in the small yellow signs being held by the people in the crowd that read "No War" the villagers understand that construction of this Navy base, so close to China's coastline, is a wildly provocative move in the U.S. military strategy to surround China. It will only bring more conflict to their part of the world.