Halt the Jeju naval base project! 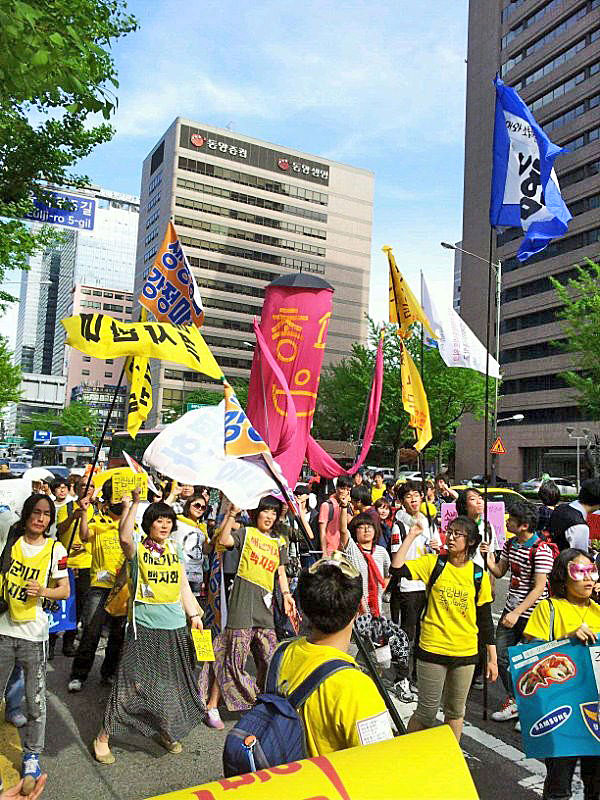 Activists against naval base, Seoul, May Day
(Photo by Choi Hye-Young)

On April 28, one truck driver working on the naval base construction informed one of the one-person protesters that it's the last time seeing me drive this truck, and I may come to Gangjeong to oppose the naval base. This is the second objector, after one Daelim sub-contacted worker blew the whistle on his behaviors at the candle light vigil, to conscientiously revoke their participation in construction. The non-violent protests are bearing fruit, and represent a crucial validation to maintain our course.

On May 1, Park Geun-Hye, the chairperson of the ruling Saenuri party and a presidential frontrunner for the conservatives in coming December election (as well as the daughter of deceased ex-President Park Chung-Hee who ruled South Korea for decades under a military dictatorship) made absurd remarks that, "In the case of Hawai'i, tourism income is 24% of total island finances, while military-related income is 20%," and "If we construct the Jeju naval base as civilian-military dual use port and make it so that 150,000 ton cruise ships can dock, it would not likely to be less than Hawai'i." Villagers and activists went to the island government building to protest her visit with Jang Ha-Na, the newly elected member of the National Assembly, who was prevented to enter into office along with people.

While the government propaganda on the so-called "Beautiful Tourism Port for Mixed Civilian-Military Port (which will, in fact, be 100% a naval base) is ongoing, solidarity protests are growing far over the world. Responding to Angie Zelter call for protest on May 9, there will be solidarity protests including Berlin, Frankfurt, Fukuoka, London, New York, Paris, Washington DC etc from May 5 to 12.

Apr 26 :
Violence against villagers and activists has become more severe in Gangjeong in recent weeks. Fr. Mun and Sisters were grabbed by the collar and abused by private security workers hired from Samsung C&T. Due to this day's physical altercation, Fr. Mun's physical condition worsened and he had to seek rest at home.

Oh Soo-Yong, professor of Law School, Jeju University, presented that a central government ministry has no right to cancel the island government's order to navy to halt construction. In this case, the island government carries priority, and thus, the ministry's cancelation is in violation of the Constitution and Jeju Special Self-Governing law. His presentation was held at a time when the island government is postponing its decision regarding the order to the disappointment and fury of the island people.

April 27 :
The poetry-music concert, "Our name is Gureombi", supporting Gangeong village was held at Myungdong in Seoul. Novelists, poets, elected officials of the 19th assembly, and Mayor Kang Dong- Kyun participated in this concert with all the proceeds being donated to the Gangjeong village.

Prosecutors suggested two years' imprisonment for Prof. Yang Yoon-Mo. The court decision will be on May 11.

Apr 29 :
Performances regarding April 3 massacre and problem of naval base were held in Gangjeong village by artists from Jeju island.

Apr 30 :
Jeju island Governor, Woo Keun-Min, interviewed with a daily paper and said, "On March 25, Jeju CBS conducted a survey of public opinion about ways of development direction and revealed that 52.2% of total respondents replied they want 'Beautiful tourism port for mixed civilian-military dual-use' and 14.7% people answered the development focusing on naval uses while just 20% denied both of them". Based on these results and in justification of his support of a dual-use port, he said that if civilian-military dual-use port could be definitively verified, then Gangjeong villagers and activists might be persuaded to accept construction.

When there was a solidarity protest in front of South Korea Consulate General in Seattle, initiated by Jeju artist, Koh Gil-Chun, and joined by Bruce Gagnon during his one month speech trip and others, the SK Consulate General delivered them government propaganda leaflet that reads the villagers are favoring of naval base and the base is nothing to do with the US military. The US protest organizers made public press release refuting such false statement on May 1. In 2007 when more than 70% of village electorates voted, 94.2% of them opposed the base project. Otherwise "Several ROK mainstream news articles have contained acknowledgements that US warships (aircraft carriers, submarines, and Aegis destroyers) will be ported in Gangjeong." (May 1 News release)

May 1 :
Park Geun-Hye, the extraordinary chairman for the ruling conservative party visited Jeju Island government building and certified the necessity for the construction of naval base. The villagers and activists protested several hours amidst heavy rain in protest of her promotion on the civilian-military dual use port.

She said that Jeju naval base is needed for national security and it might be crucial opportunity for Jeju Island to make a new leap forward. Moreover, she also said that as the economic development of Jeju Island was owing to tangerine growing in 1960s and 1970s, the naval base would be growth engines in Jeju Island from now on. And she gave an example the case of Hawaii, "In the case of Hawai'i, tourism income is 24% of total island finances, while military-related income is 20%," and "If we construct the Jeju naval base as civilian-military dual use port and make it so that 150,000 ton cruise ships can dock, it would not likely to be less than Hawai'i." Park had said that she opposed naval base construction without residents' agreement in 2007.

In commemoration of Labor Day, while workers in the Jeju gathered declaring their opposition to the Jeju naval base, many people who love Gangjeong village gathered at the central square in Seoul wearing beautiful yellow T-shirts. They paraded with other protesters having variety of issues under the slogan "general strike for precariats" along the center of Seoul, then, stopped in front of the Samsung building and danced (so-called addictive dancing) and sang together as meaning of stop the construction of naval base.

Meanwhile 164 Lawyers of Democratic Lawyers' Association submitted a petition to the Jeju island government demanding it to promptly order the navy halt of construction (destruction).

Kang Chang-Il, National Assembly man, Jeju branch of Democratic Party said the total arrest numbers in the Gangjeong village since 2010 has reached more than 540 while more than 9,400 main land police personnel have been input.

May 3 :
In protest to remarks by Park Geun-Hye and inciteful propaganda directed towards the peace activists who struggle for a righteous cause, the Eup(Town)-Myeon(Township)-Dong (Village) Committee of Jeju island had a news conference announcing "It is the will of the Island people" to oppose the Jeju naval base. They also demanded that "There is no such instance of a dual-use port for both cruise and military vessels in the world. Clarify the truth on the port being built in Gangjeong." They warned the island governor: "We order the island governor to order a halt to the navy's construction (destruction) or cancel it over the license on reclamation on public water and its surface. If the Island governor ignores the island people, the island people cannot but abandon the governor."

The Ministry of Land, Maritime Affairs and Transportation announced that it would make preliminary note on legislation on May 4 to designate the whole water areas of the Jeju naval base project as a 'trade port,' in pacifying people's suspicion on dual use port that has been proved to be a pure military harbor.

Meanwhile, the Gangjeong Sea is being contaminated by the navy's illegal destruction, to the fury of Save Our Sea team who monitors navy's environmental destruction. Dr. Song Kang-Ho, leader of SOS is still in prison since his being arrested on April 1.

More than 30 teenage students from the mainland joined people's candle vigil. The playground near Gangjeong stream has been always full of police bus and police vehicles. Tonight, however, with the joint Catholic mass of Seogwipo, Seogwi- bokja and Jungmun parishes to commemorate the night of St. Mary, it has been filled with priests, lays and holy sprits.

1. Please take some time to write protest letters to the government and the naval base planners and contractors, demanding the annulment of the Jeju naval base project that is promoted under the false name of 'Beautiful Tourism Port for Mixed Civilian-Military Use,' and stopping construction (destruction) including the blasting of the Gureombi Rock and human rights violations. Please remind them that the central government and government–affiliated corporations such as Samsung and Daelim should not oppress the Island people with their naval base business project, which is the reminiscent of a 2nd 4. 3.
Appropriate addresses can be found here:https://app.e2ma.net/app/view:CampaignPublic/id:33867.7483820829/rid:c5c744865a7b372e77e36ea5fb216220
http://www.secc.co.kr/eng/html/customer/contactus.asp (Samsung C & T)

2. Please write a letter to Woo Keun-Min, Island governor, to immediately order the halt of the construction (destruction); to stop the deceptive propaganda regarding the so-called "Beautiful tourism port for mixed civilian-military dual-use" which in reality is only 100% a military base; to revoke the navy license for reclamation of the coast and sea in the base project area; and to restore the absolute preservation area that was annulled for the naval base project through undemocratic procedures in 2009. Also please demand that he give a sincere apology to the people attacked on the night of March 26th when he mobilized government officers to suppress the people's sit-in.
Mr. Woo Keun-Min, Jeju Island Governor: kmj5369@jeju.go.kr or jejumaster@jeju.go.kr

3. Please write to the Democratic United party members to work harder to revoke the Jeju naval base project. Please tell them that the so-called "Beautiful Tourism Port for Mixed Civilian-Military Use", has been confirmed as a fraud and that the party should resolutely reject the Lee Myung-Bak government's enforcement of Jeju naval base project under such deceptive propaganda. Please remind them that the party's election pledge was to "re-examine the project from the beginning point" and that they should also consider a special prosecution system regarding the Jeju naval base issue, regarding the crimes committed by the government. Pressuring them is very important, as their party is the main opposition party:

5. For more immediate situation updates, join the facebook group, 'No Naval Base on Jeju'.

This newsletter/appeal is updated every week.
Thank you, The Extended International Team of Gangjeong Village
May 3, 2012