Chejudo: Cut the Budget for the Naval Base!

National Assembly Defense Committee starts the examination on budget.
Cut the budget for the Jeju naval base project! 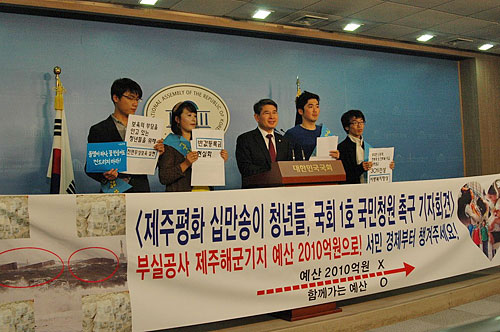 The Youth group called '100,000 Young People for the Peace of the Jeju,' is actively working to cut all the budgets for the National assembly. They call for the budget for people's welfare instead war base. The photo is the press Conference on Nov. 6, 2012. The group has submitted the No. 1 petition against the Jeju naval base project to the new 19th National Assembly on June 5 this year with signs by more than 27,000 people.

The National Defense Committee of the National Assembly starts the examination on the government budget included of Jeju naval base project next year on Nov. 5. The committee is composed of 9 members of the ruling Saenuri Party (New Frontier Party), 7 members of Democratic United Party and 1 independent.

On Nov. 5, the Gangjeong Village Association, Jeju Pan-Island Committee for Stop of Military Base and for Realization of Peace Island (26 groups) and National Network of Korean Civil Society for Opposing to the Naval Base in Jeju Island (125 groups), delivering the defense committee 19 page 'opinion statement for the budget cut on the Jeju naval base project, 2013' strongly demanded the whole budget cut on the project, 2013.

Among the 2013 compiled budget for the Ministry of National Defense and Defense Acquision Program Administration (DAPA), The Jeju naval base-related budget for 2013 is about 200.9 billion won. According to Oh Hye-Ran, Secretary of the SPARK, the budget, 200.9 won is compiled of: 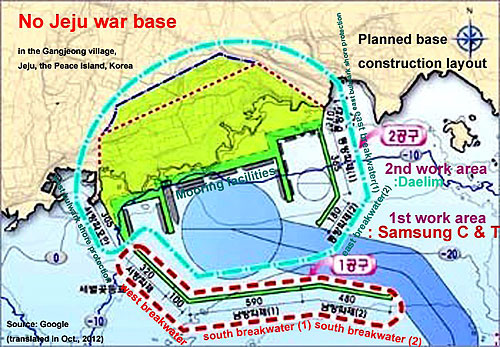 Among them, 10.1 billion won (5%): Military residential house (outside barracks).

(* In detail: The navy plans to use about 9 billion won for the purchase of land and 1 billion won for layout. It is the budget to build 616 households military apartment for the soldiers and their families in about 100,000 square meter size land. However, the navy presentations on the military residential house have been all dissipated because of the villagers' strong protests on May. 29 and June 15, 2012. About 90% of the villagers who live in the land area that is chosen as the most probable for the military residential house have also submitted their opinion statement that they oppose the navy's purchase and expropriation of their lands. 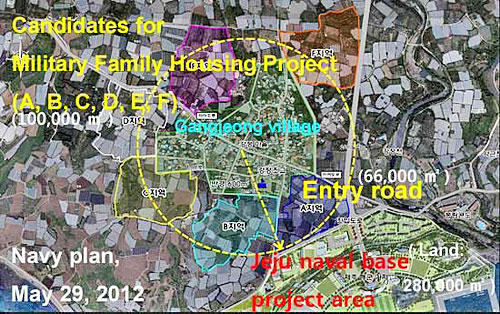 1. The validity of the purpose is lack in the Jeju naval base project

2. The technical matters on the two 150,000 ton cruises' coming alongside and out of pier and their entry & exit safety have not been verified. ( *The government's violation of its own MOU with the Jeju Island government on April 27, 2009)

3. The navy has violated the recommendation items of the Budget and Balance Special Committee of the National Assembly, in 2008.

4. By the layout, the port will not work even for military function, [therefore waste of people's tax]

5. The suspicion that the Jeju naval base is the US base. [Then why South Koreans' tax?]

6. The Jeju Island and Island people demand verification on the current base layout. The Island people and villagers oppose the project and there is possibility that the construction would be stopped.

8. Low budget execution possibility (* The construction has been far delayed, given the navy's 2011 and 2012 plans)

In the statement delivered to the National Assembly, the groups pointed out, above all, that the navy has thoroughly ignored the recommendation by the sub-investigation committee of the Budget and Balance Committee of the National Assembly that has demanded 'to objectively verify the matter through the 3rd party institute on the 150,000 ton cruises' entry & exit of port and safety in their coming along and out of pier.'

People pointed out the matter of verification on the safety of cruse's entry/exit of port is critical for the function of civilian-military complex port for tour beauty [that the government and Island government themselves have stipulated as the purpose in their MOU, April 27, 2009]. (*People know that the Government can never verify on it as the base layout has been not for the cruise but for the US nuclear air craft carrier and submarines, as recent exposures clarified it)

The people demanded to stop whole construction until verification is completed. 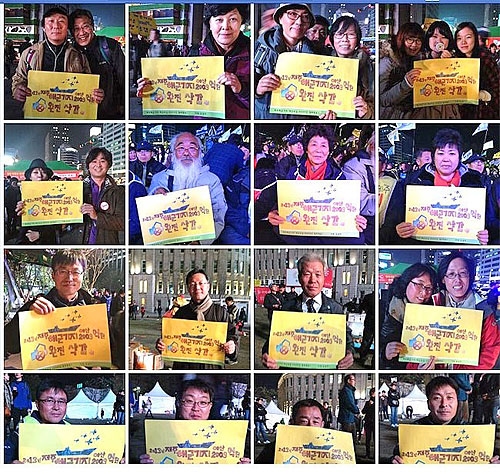 Photo by the SPARK
People hold a sign of 'Cut all the 200.9 billion won budget for the Jeju naval base project, 2012.'