Stop Conspiracy! No War Base on the Peace Island!
Stop the blasts and destruction!
Stop the human rights violations!
Stop pro-nuclear MD policy! 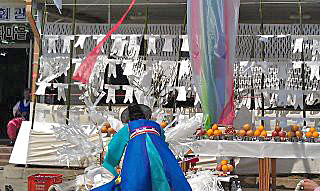 On April 7, one month since the blasting of Gureombi Rock began,
a Jeju traditional rite (driving evil spirits away and inviting harmonious spirits)
was held in the Gangjeong village, thanks to artists in Jeju. It was for
consoling the dead souls of the April 3 massacre and the villagers
who suffer from the naval base project in their village. (Photo by Lee Bora)

On the 64th anniversary of the 4.3 massacre and people's uprising, Jeju media reported that the navy had sent an inquiry letter to the Island government on March 12 seeking to designate the area of the naval base project as a "military facility protection zone." The Jeju Island government rejected the navy's request as it was in violation of the MOU regarding the so-called "beautiful tourism port for dual purpose civilian-military use", made with the three parties of the Ministry of National Defense (MND), Ministry of Land, Transportation and Maritime Affairs (MLTM) and the former Jeju Island government on April 27, 2009, which reads that the MND "...shall not designate the base as a protected military base and military facility area; and shall not do activities which prohibit the exercise of the villagers' survival rights such as passage, farming, fishing, architecture and property rights (Article 8)". The letter was also in violation of National Assembly advice on Oct. 22, 2011, recommending that the MLTM designate the civilian-military harbor as a "trade port."

However, the position of the Jeju Island government, pushing for this so-called "civilian-military dual use port," (which, being fake, the villagers and citizens oppose), was revealed again to be deceptive when on April 5, they chose to join the central government's April 6th base lay-out verification meeting, despite the fact that the people oppose joining this meeting because the meeting is based on the report of which the ordering client was Samsung C & T, not the government.

Meanwhile, the navy has been completely ignoring the Jeju Island government's request to stop construction/destruction until the base plans have been re-verified. They have continued and even increased the blasting of Gureombi Rock and the dredging of the sea, even in rain and poor weather conditions. The Island government has twice postponed hearings (currently until April 12) to decide if they will officially order the navy to stop construction. These postponements have been fiercely protested by the people as delay tactics.

It is in this context which the people continue their daily protests despite ordeals reminiscent of 64 years ago: Illegal and violent arrest and imprisonment under the police excuse of "prevention of crime", the very same tactic used 64 years ago to massacre the people.

According to one of the traditional rite organizers, "64 years ago, more than 100 people from Gangjeong villager were killed. 64 years later, the descendents are still living in suffering. Through this ritual [on April 7], we hope that this time of affliction can be the momentum to declare a time of Life and Peace."

4 April: Fr. Kim Jeong-Wook and Rev. Lee Jeong-Hoon were released with suspended sentences, 2 years' probation and 100,000 won fine each. Both had been arrested on March 9 when they joined to break the fence to help people to enter the Gureombi Rock coast.

5 April: More than 150 peace activists in yellow t-shirts gathered in front of the Samsung C&T building in Seoul, protesting against Samsung C&T's blasting and destruction of Gureombi Rock in Gangjeong village. People held signs saying, 'Revoke the naval base project.' Kang Dong-Kyun, the village mayor, and some Jeju and international activists joined the protest and sang and danced together. The protest went on for more than 40 minutes until the police demanded them to scatter. Nonviolent actions like this will keep going in Seoul.

6 April: Catholic priest Fr. Mun Jeong-Hyeon was severely injured in a fall from a five-meter-tall tetrapod at a breakwater pier in Gangjeong Port. He was pushed and accidently caused to lose his balance while by a Coast Guard officer who was attempting to stop activists from using the breakwater to jump into the ocean. The people denounced the police and government in a press conference on April 9, saying, "If the accident occurred because of the maritime police's intentional deterrence, it could be seen that the maritime personnel committed the crime of attempted murder. Even though it might be called as simple accident, it is clear that the maritime policemen were the cause of accident, with their unnecessary, over-aggressive, illegal and violent attempt to bring conflict in a very dangerous place." It was also pointed out that such planned and intentional human rights violations are possible only by the Government's systematic supervision.' The hospital confirmed that Fr. Mun suffered fractures to 4 vertebrae, his right arm & hand and shoulder that will need hospital treatment for at least 6 months. At the time he was injured, Fr. Mun was holding a Catholic Good Friday mass with around thirty other Catholics and peace activists.

Otherwise, the Lee Myung-Bak government's expanded repression against international activists has continued. Following the March 26, 31, and April 2 denial of 4 Japanese people, two activists from Okinawa- Masahiro Tomiyama and Tomita Eiji- were also denied entry to Jeju on April 6. So far more than 9 people, including three members of the U.S. Veterans for Peace, have been denied entry to Jeju Island by the Korean government, this year.

7 April: There was a traditional ritual for consoling the dead spirits of the April 3 massacre and the villagers who suffer from the naval base project in Gangjeong. According to one of the organizers, "64 years ago, more than 100 people from Gangjeong villager were killed. 64 years later, the descendents are still living in suffering. Through this ritual [on April 7], we hope that this time of affliction can be the momentum to declare a time of Life and Peace."

That evening, Mr. Lim Ho-Young, Gangjeong village media team leader, was released on bail after 10 days' detention and imprisonment, thanks to lawyers' tremendous efforts. He was arrested on March 29, under the arbitrary charge of 'obstruction of government affairs'.

9 April: The joint solidarity statement between the people of Okinawa and Jeju reads:

"During the U.S. military regimes there were deprivation of human rights in Okinawa and the 4.3 massacre in Jeju. These massacres were the U.S. regime textbook pre-election actions in order to install pro-U.S. governments...It is the UN command which is the critical chain that links Korea-Japan, and Okinawa-Jeju...The ROK-US-Japan trilateral military alliance is not an abstract concept but a military institution supervised by the same commander."

The court dismissed the Dr. Song Kang-Ho's lawyer's request to review of legality of his imprisonment.

Hyun Ae-Ja, a former National Assembly woman and co-chairwoman of the Jeju regional branch of the Progressive Unity Party was arrested as she made a speech in front of the construction (destruction) gate. The opposition parties made statement that it was a clear political oppression that occurred right before the April 11 general election and illegal activity that invaded the right to freedom of expression and political activities protected by the Constitution.

10 April: Explosives were carried out despite rain but returned back due to worsening weather. However, the Jeju media reads that the navy would attempt blast on April 11, the national holiday for general election. Otherwise, aggressive ROK-US war exercise called Foal Eagle that started on March 1 is continued throughout Korea by April 30

Take Action:
1. Please take some time to write protest letters to the government and the naval base planners and contractors, demanding an end to the 2nd 4.3, blasting, construction, and violation of human rights.

2. Please write a letter to Woo Keun-Min, Island governor, to stop the 2nd 4. 3, to order the halt of the construction; to revoke the navy license for reclamation of the coast and sea in the base project area; and to restore the absolute preservation area that was annulled for the naval base project through undemocratic procedures in 2009. Also please demand that he give a sincere apology to the people attacked on the night of March 26th when he mobilized the government officers to suppress the people's sit-in.

These actions will really help to stop the on-going destruction being caused by the naval base project!

3. Please also consider signing the petitions on Avaaz (http://www.avaaz.org/en/save_jeju/?vl) and distributing this letter among your networks.

For more immediate situation updates, join the facebook group, 'No Naval Base on Jeju'.

4. Please write encouraging letters to Dr. (or Brother) Song in Jail and Fr. Mun Jeong-Hyeon in the hospital. Both can read English.

Thank you,
The Extended International Team of Gangjeong Village
April 10, 2012