Despite opposition, the South Korean government is going ahead with a planned ROK naval base on the resort island of Cheju-do (below). While I wish they would keep Cheju-do (aka Jeju or Jejudo) as pristine as possible, I can see here at Oahu that it is possible to have a balance between urban development, natural environments, tourism, and military facilities.

Oahu is one-sixth smaller than Cheju-do but with 50% more people. Geographically, there are considerable similarities, with the interior being less accessible due to higher terrain. (Cheju-do is often billed as "Korea's Hawaii," which I used to snicker at, but having lived here for three years, I would have to say that in terms of what to see and the quality of life, Korea's southernmost province is quite similar to Oahu; not necessarily the rest of Hawaii, but Oahu.)

Anyway, this naval base is facing opposition, by the same chinbo "progressives" who oppose US bases on the Korean mainland. Such opposition is much less common in Hawaii, but it is par for the course in Okinawa and in America's own territory of Guam. In Hawaii, while most recognize that the US military is an economic boon to the state, there is a sense that the military people are different, often seen as less desirable outsiders. Indeed, the tension and even animosity is palpable sometimes, particularly in Waikiki and other places where US military personnel may go but where they are clearly seen as non-locals.

Back to the Cheju-do base. This large-scale facility, which could welcome even US aircraft carriers, will help South Korea project its own navy and air force to the pirate-infest waters of the Malacca Strait (joining our Japanese neighbors, who will be authorized to go anywhere in the world as long as its to battle pirates), allowing South Korea to pull more of its own weight in the ROK-US alliance, which I think is a good thing. 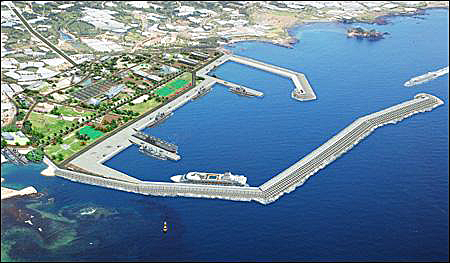 The prospective outlook of a strategic naval base to be constructed on the southern resort island of Jeju over the next five years. / Courtesy of Navy

The South Korean government approved the long-delayed plan to build a strategic naval base on the southern resort island of Jeju, Monday.

The Ministry of National Defense, the Ministry of Land, Transportation and Maritime Affairs and the Jeju provincial government signed a memorandum of understanding on the construction of the Jeju base, which will be able to accommodate cruise liners as well as warships.

The project, initiated in 2002, has been suspended several times due to opposition from locals, often led by progressive civic groups. Opponents claim that the construction would tarnish the image of the island, designated as "The Island of World Peace" by the government in 2005.

A five-year construction will begin by December after reclamation work and a feasibility study on environmental effects, the defense ministry said in a news release. About 950 billion won will be spent to build the 530,000-square-meter base adjacent to Gangjeong village in the southern part of the island, it said.

The base will be used as an up-to-date commercial port able to accommodate two150,000-ton cruise liners, it added.

The port will be able to harbor some 20 sophisticated warships, serving as the homeport of the Navy's "strategic mobile squadron," to be inaugurated by 2015, Navy officials said.

The mobile squadron, which will be rapidly deployed in regional conflict, will consist of 4,500-ton KDX-II destroyers, 7,600-ton Aegis-equipped KDX-III destroyers, Type-214 1,800-ton submarines, anti-submarine Lynx helicopters and frigates among others, they said.

The squadron is expected to play a key role in managing possible conflicts with Japan and China, they added.

In line with the plan, the Air Force also plans to build a base for a search-and-rescue unit to help facilitate the Navy's operations in the southern waters.

"Jeju has long been considered a tactical, strategic point to secure southern sea lanes for transporting energy supplies and to conduct mobile operations in the case of an emergency in the region," a Navy spokesman said.

"Following the construction, the Navy will be able to successfully conduct long-range operations to protect our commercial vessels in blue waters, including the Malacca Strait, as well as carry out full-scale operations around the Korean Peninsula," he said."

The defense ministry had initially wanted to build the base in the southwestern village of Hwaseon or southeastern Wimi, but the decision was modified because of objections from locals.

Supporters of the plan have insisted the naval port will bring economic benefits to local people by inducing a great amount of direct investment into the region from the construction of infrastructure for sailors.

However, opponents have argued that the base cannot suggest clear evidence of future economic growth, citing American troops stationed in Okinawa, where the local economy is stagnant.

Some anti-U.S. civic groups have also raised suspicions of the project being related to the country's joining the U.S.-led global ballistic missile defense (BMD) system, arguing the plan will make Jeju vulnerable to international terrorism and becoming a potential military target of anti-U.S. militants.

The Korean Navy admits that U.S. aircraft carriers may visit the port, but made it clear that it has no plan to join the BMD and make the port a permanent station for U.S. forces.

(From The Japan Times May 16 issue)

The Diet on May 13 endorsed a Japan-U.S. accord on the planned transfer of U.S. Marines from Okinawa to Guam by 2014. The opposition-controlled Upper House voted it down, but under a constitutional provision, the Lower House's earlier approval of it prevailed.

The total relocation cost is set at $10.27 billion. Under the accord, Japan will shoulder $6.09 billion â up to $2.8 billion directly from the Japanese government and the remaining $3.29 billion in loan provisions. The Japanese money will be used for constructing the headquarters buildings, residences, schools and infrastructure, including water supply and sewerage. The government has not provided a clear cost breakdown â the main reason for the opposition parties' opposition to the accord. The accord is unusual in that Japan will be paying for the construction of U.S. military facilities overseas.

The relocation of Marines is contin gent on the moving of the U.S. Marine Corps' Futenma Air Station in Ginowan â in the central part of Okinawa Island â to Camp Schwab in Nago in the northern part of the island. The U.S. and Japanese governments have agreed on the detailed location of the new airfield. But the Okinawa Prefectural Government is against the location. Thus the move has been stalled.

Although the relocation of Marines is supposed to end by 2014, Adm. Timothy Keating, the commander of the U.S. Pacific Command, has said the transfer of Marines from Okinawa to Guam will take longer than planned. The U.S. Government Accountability Office also said in its September 2008 report that the cost could top $15 billion. If the cost increases, the United States may call on Japan to shoulder a bigger burden.

Although it has been publicized that some 8,000 Marines and some 9,000 dependents will move from Okinawa to Guam, this is inexact. The government now says the intention is to reduce the complement of Marines in Okinawa from 18,000 to 10,000. Since there are about 12,500 Marines in Okinawa, the plan suggests that fewer than 8,000 Marines will move to Guam. Many important things have yet to be explained about the relocation plan.