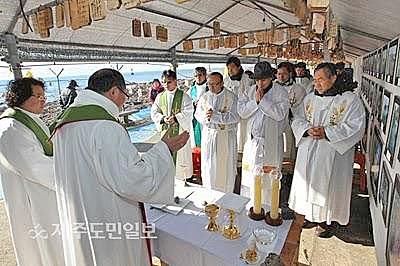 1.On Jan. 12, about 30 people of the Fathers of the Catholic Priests' Association for Justice (CPAJ), nuns, and devotees visited the Gangjeong village. According to a Jeju article, Fr. Kim In-Gook mentioning "If the naval base is built along with United States nuclear weapon, peace cannot be guaranteed," and "the naval base construction not only brings about tensions in the neighborhood counties but also stimulates again the expansionism of Japan, " expressed his opinion that, " the strongest security strategy is secured not by the expansion of military facility but by diplomatic effort based on trust and peace. Also saying, "lf a naval base comes it, the stronghold to prevent the 2nd and 3rd naval bases will disappear," he urged the need of self-awareness by the Jeju Society. Saying, "The Gangjeong naval base would be the last button of the 'West Sea(Yellow Sea) belt' that would oppress China with military force, he strongly claimed that, " Horrendous things will happen if the naval base is allowed in the Jeju. One should break the chain of military bases." He expressed his will that the Catholic, centered on the CPAJ, would spread the information on the current situations and problems of the Jeju naval base throughout the Catholic churches nationwide. (summary translation of the articles) 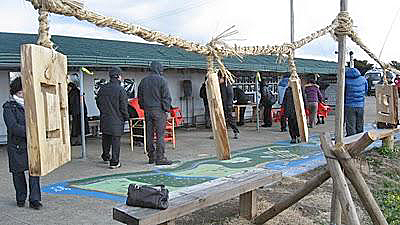 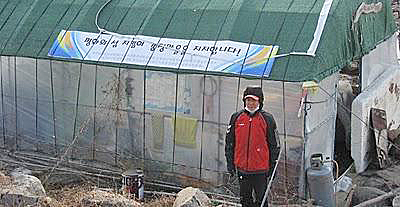 This banner on the roof of the tent reads:
We support gthe Gangjeong Village, the protector of the peace Island!

The devotees from the Catholic districts of the cities of Daekoo, Incheon, Seoul and Suwon have prepared the banner. They presented it to a movie critic Yang Yoon-Mo who has been keeping the Joongduk coast for near two years to protect the coast from the naval base construction and who has recently been released from the Jeju Prison.

The big yellow letters in the banner read:

There must be no naval base construction that instigates war crisis
in the Island of Peace!

by the devotees from the Catholic districts of the cities of Daekoo, Incheon, Seoul and Suwon.
Photos by Go Gwon-Il, Gangjeong village, Jeju Island. Text comes later.

2. Goh Chang-Hoo, mayor of the City of Seowipo to which the Gangjeong village belongs in jurisdiction visited the Gangjeong villagers in the evening of Dec. 12. He had been designated by the Woo Gen-Min Island governor as the mayor of City of Seogwipo, following the Island law by which the Island governor can name the mayors of the two cities of Jeju and Seogwipo each.

While attempting to appease the villagers with his pretending posture to hear on the villagersâ accumulated complaints to the administrative, the Seogwipo mayor said the naval base issue was that he could not do solve-that meant he had no will to withdraw from the naval base construction plan.

While some villagers criticized his attitude, another villagers made points of how the administrative has abused the naval base plan, as to the degree that necessary items of village business, which have to be supported by the Island and Seogwipo City government, could not be done, because many items for the village had been named under the naval base construction plan. Some said, " The business items such as the pavement of the inner village roads and agriculture roads are all being under the name of naval base business. If not the naval base plan, you seem to have no idea to help our village," A villager even said, "Do not take the village business related to naval base budget. Even the solar energy business, which has been done with its layout in our village the other time, was later proved to be naval base related business." The villagers demanded the Mayor of Seogwipo, to drive the necessary business for the village, not relating them to the naval base promotion business. (summary translation of the articles) 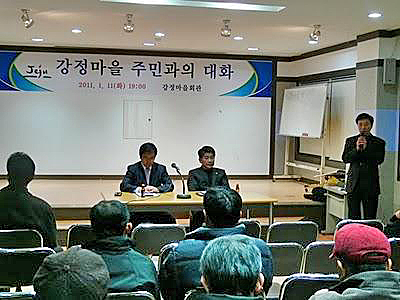 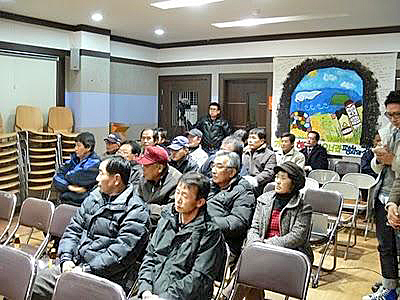 3. The workers in the Jeju regional branch of the Korean Confederation of Trade Unions, and their supporters are fighting against profit-oriented hospital plan by the Island government, which would be the 1st step execution of the ROK-US Free Trade agreement, in the field of medical care, starting in the Jeju Island. The plan on the profit-oriented hospital has been much criticized by the Island people who have gotten benefit of medical care managed by the government for long time. Recently the managers in a hospital called, "Hanmaeum" has unilaterally broken the promise with their workers who have claimed of their rights to organized negotiation activities. The workers see the behavior of the hospital managers and hospital association who interfered between the managers and workers, as their attempt to oppress labor unions. (summary translation of the articles) 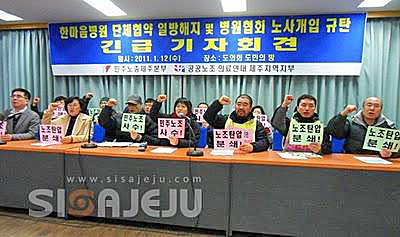