2. September 2015
Four years ago today beautiful and ancient Gureombi Rock was closed off to Gangjeong villagers to prepare it for demolition. In order to dislodge the protesters, a massive crackdown operation was undertaken by the police in which a large number of people were arrested.

Video von 2011
Uploaded on Sep 6, 2011
No naval base! Save Gangjeong! Go away violent police!
They blocked every road to Gureombi.

Remembering the Gureombi-Rock in the 4th year of its blockade.

What have changed since then when about 1,000 policemen from the mainland of Korea were mobilized, to arrest 36 people and imprison 3 people on the day, and to blockade the road to the Gureombi Rock, totally?

One of the changes is the scene of the landscape. One is upset to see the excavated sites (under the excuse of investigation on cultural treasure before any construction)on the way from the main construction gate to Samgeori. It means that the navy is very likely to ready to take off sooner or later people’ land where our communal restaurant is located. We wonder by when our current lives which depend on communal restaurant can last.

Things are not rosy. Still people take care one another together, share food together. The communal spirit for peace is what we expect would never fade. 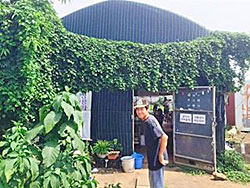 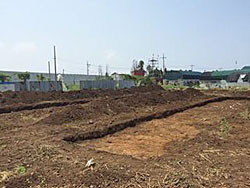 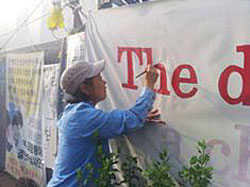 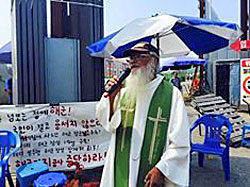 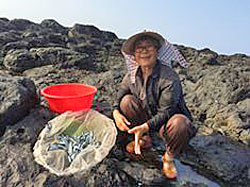 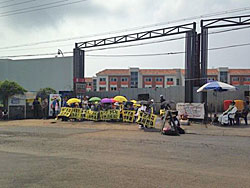 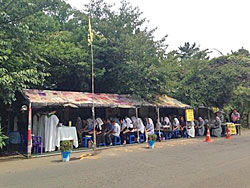 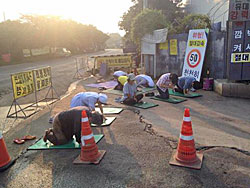 Big turnout today at the 11 AM mass

100 bows for peace this morning. Today marks 4 years since Gureombi was fenced off.
Fwd:[Sept. 2]
We would continuously protest to Samsung's illegal activity-a press conference in relation to the ‘Bleeding Gureombi” performance

Six activists who had joined performance protest in front of the Samsung C & T in Seoul in March 2012 led a press conference on Sept. 2 in relation to the recent Supreme Court decision on the protest. At the time, they used red paint in their performance cloths to protest Samsung’s illegal Jeju naval base construction. (2nd photo in the below)

The press conference participants also pointed out that the navy’s recent plan to demand reimbursement of about 20 million USD from the village is also related to Samsung C & T.

According to July 31 media, the Samsung C & T demanded the South Korean government additional cost of about 30 million USD following the delay of the Jeju naval base construction. And it is to receive about 20 billion USD. It is the basis that the navy is considering to demand reimbursement of that amount (even the whole) from the villagers.

The participants in the press conference said that there should be citizens’ watch on close relationship between government-navy-corporation and citizens’ ongoing peaceful protest to it. 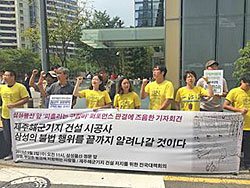 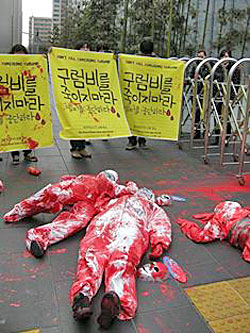 Source:  http://www.peoplepower21.org/Peace/1357507
http://cafe.daum.net/peacekj/5htg/975
Photo source: PSPD and War Without the World
2015-09-03
There was also former Samsung Workers' regular protest in the same spot on the day. Samsung is infamous for its exploitation on workers and deadly work environment for which many workers have met disease and death. 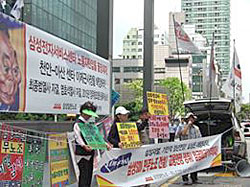