The MWC delegation came at the invitation of Japan Mennonite Fellowship (JMF) to listen to the churches' concerns, visit affected areas, explore opportunities for response to disaster victims and to express the global church's solidarity with Japanese people.

"It is good that you have come," one participant told the delegation. "We do not know [our way forward] yet, but we will listen to each other. The problems are complex. Solutions will take time." In the course of the visit, however, it became clear that JMF was ready to organize itself to initiate a response.

On May 28 JMF took a significant step in forming the East Japan Great Disaster Relief Assistance Committee to provide relief and early rehabilitation. JMF had received $55,000 from their member churches for disaster relief.

MCC, which has received more than $954,000 for Japan relief, has earmarked a portion of their donations to support the Anabaptist churches' coordinated efforts and is currently in communication with JMF regarding joint initiatives that are taking place. MCC has already given $700,000 to ecumenical Church World Service, a long term and ecumenical partner of MCC. Donations are still being accepted.

"The tsunami-affected area is still [covered in] the debris," said JMF chair Takanori Sasaki, "but we gradually hear the footsteps of recovery."

Some Mennonite and Brethren in Christ initiatives are already underway:

While issues around food and dislocation were overwhelming, the MWC delegation also heard concern about radiation. According to Bert Lobe, "the delegation sensed general angst with regard to nuclear energy. The impact on those close to the Fukushima Daiichi reactors remains of great concern." There are 70 nuclear power plants in Japan.

"Are there atomic energy experts in the Anabaptist communion with whom we might be in conversation? Can you send us a theologian who can help us address the nuclear question?" asked Takanobu Tojo from the Tokyo Chiku Menonaito Kyokai Rengo (Tokyo Area Fellowship of Mennonite Churches). Since the delegation visit, the JMF has begun a study process, and would like to work with the MWC Peace Commission to address the nuclear energy concerns among Japanese.

Meeting participants saw recruiting volunteers as essential. Japanese would serve for up to four weeks and international volunteers could be invited to come for several months. Indonesian delegation member Paulus Hartono was keen to have Indonesians volunteer due to their experience following the 2004 Sumatra tsunami.

Hartono spoke of lessons the Indonesian church learned after the Sumatra disaster: talk less and do more; focus on program and unity, both geographically and programmatically; work in teams; see that teams are accountable to the conference and that the conference monitors and evaluates the teams.

In the wake of the visit, the East Japan Great Disaster Relief Assistance Committee will function under the JMF. Members include: Takanori Sasaki, chair; Shintaro Okazaki, representative coordinator; Mitsuru Ishido, field coordinator; and Shozo Sato for public relations of JMF. In addition, Yoshihira Inamine is assisting MWC, MCC, and the Asia Mennonite Caucus with communication. 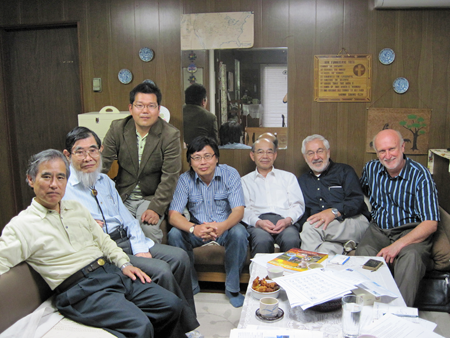 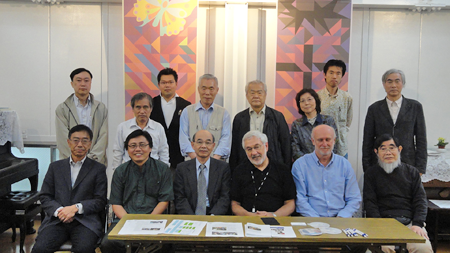 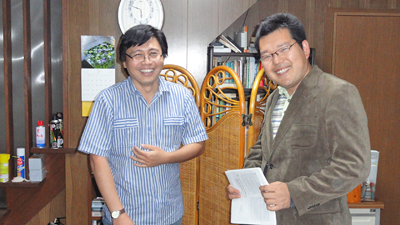 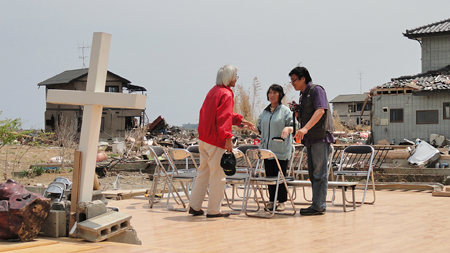 Pastor Minay Gishe and his wife Yasocho of Bible Baptist Church, one of the Baptist churches that has received help from JMF, in Kesennumu City with Paulus Hartono (right).
Photo credit: MWC delegation to Japan 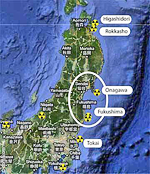