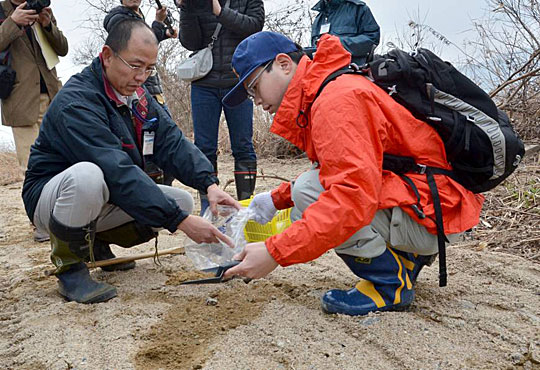 In March 2013, a resident of Takashima, a small town of about 51,000 people on the northwest side of Lake Biwa, discovered something unusual. Along the banks of a local river, someone had dumped, over a more than 500-meter-long area, 77 bags containing 300 tons of wood chips.

Something about the bags aroused local suspicion, but inquiries by local residents to the Takashima Municipal Government the following month produced only vague assurances that the bags were part of a road-paving project along the river bank and that there was nothing to worry about.

As it turned out, there was cause for concern. Local residents continued to pester the city and prefecture for answers, and by August independent monitors had found the bags were contaminated by radiation.

How contaminated the site was remains the subject of controversy. A nonprofit group based in Kyoto consisting of academic experts carried out their own measurements at the site and came up with a level of 12,000 becquerels/kg. But a prefectural survey, carried out in October not long after a large typhoon passed through the area, showed readings of 3,000 becquerels/kg and then 3,900 becquerels/kg.

Environmental regulations stipulate that debris with less than 8,000 becquerels/kg may be treated as industrial waste not subject to the special handling reserved for more radioactive waste.

Details about what happened are still sketchy. Prefectural investigations have discovered who dumped the waste and parts of the story have been reported. On Tuesday, the Shiga government filed a criminal complaint with the Shiga Prefectural Police against three individuals — an executive with a consulting firm in Tokyo, the owner of a construction company in Omihachiman in Shiga, and another man believed to have acted as a go-between. On Thursday, the Shiga police raided several offices belonging to those implicated.

But much information has been kept from the public, including the names of these people.

Maki Umemura, a local translator, is one of about a half-dozen residents who have filed an appeal with Shiga prosecutors and police, demanding a formal, public investigation.

“The wood chips discovered in Takashima were part of a larger shipment of 9,000 tons being transported to Kagoshima Prefecture for use in a manure plant. But Kagoshima rejected the chips when they discovered they were tainted with radiation, including the highly toxic cesium-137. Worse, the remaining 8,700 tons of chips are still missing,” she said.

What the Takashima incident clearly demonstrated was just how easy it is for unscrupulous firms recruited to dispose of Fukushima’s radioactive debris to simply dump it wherever they please, and how urgent it is to at least reduce the odds of another case of illegal dumping by constructing proper interim storage facilities for tainted waste as quickly as possible.

But three years after March 11, 2011, where to store Fukushima’s radioactive waste remains the subject of discussions between Tokyo and the towns, cities and prefectures affected.

Fukushima Gov. Yuhei Sato has proposed a plan to build two interim storage facilities in the towns of Okuma and Futaba, which host the crippled Fukushima No. 1 power plant. The town of Naraha, farther south near the Fukushima No. 2 power plant, would meanwhile host a facility to dispose of incinerated ash by mixing it with concrete.

But the local governments in Fukushima where the plants would be built have several conditions for agreeing to the proposal. One is a guarantee from Tokyo that waste stored at the facilities will be removed and sent elsewhere for final disposal within 30 years. The half-life of cesium-137 is 30 years, the maximum period Fukushima wants to host interim facilities.

Ishihara has hinted that if the proper atmosphere was created in Fukushima, the central government would offer such guarantees.

But Sato told reporters after a December meeting with Environment Minister Nobuteru Ishihara that formal legislation authorizing the waste to be removed was not enough.

“Safety, and local economic revitalization, are also issues that have to be discussed one at a time in order to make progress on discussions (on whether to allow the building of the facilities),” Sato said.

The central government wants the facilities up and running by early 2015 and has set aside ¥100 billion in the fiscal 2014 budget to purchase the land. Construction-related costs are expected to total about ¥1 trillion.

But many Fukushima residents, and politicians like Sato, worry that whatever promises Tokyo politicians make in 2014 may well be forgotten three decades from now, and that what is called an “interim” facility today may end up becoming a permanent facility down the road, especially since details concerning the final storage facility have yet to be finalized.

In addition, how long it will actually take to physically move the debris to the new facilities is, at this point, only an educated guess.

Last December, an Environment Ministry panel was established to research transport methods for the estimated maximum 28 million cu. meters of Fukushima debris that needs to be put in interim storage. To complete the task in three years, the committee estimated, would require using nearly 2,000 10-ton trucks a day.

“It will be difficult, but we’re still aiming to finish transporting the waste to interim facilities within a few years,” said Shinji Inoue, senior vice environment minister, following the release of the committee’s report.

Yet as Tokyo and Fukushima negotiate terms and try to set a clear timetable, the illegal dumping at Takashima has local politicians and residents elsewhere concerned that, due to the unprecedented nature of the Fukushima disaster and the fact that it’s likely to be a while before the interim storage facilities are ready to go, their legal options will be limited if they happen to become the next victim of a drive-by nuclear dumping.

Shiga Gov. Yukiko Kada, a environmental scientist by training, has come under criticism for her response to the Takashima incident. She says she lacks the authority and legal framework to deal with illegal dumping.

But there are also transparency issues that the governor has yet to address. As work to remove the wood chips was finishing up in early March, the prefecture refused to disclose crucial details, like where the chips are being taken. Workers at the site only said the waste was being taken to a “remote location” where they would be stored “for decades.”

“Shiga Prefecture and Takashima are victims (of the Takashima dumping). Therefore, unless the central government and Tepco take responsibility for the environmental pollution by (clearly) saying that the perpetrators are responsible, the same problem will occur elsewhere in Japan,” Kada said.