60,000 people gathered in the heart of Tokyo, rallied through the bustling down town calling "Goodbye to Nuclear Power Plants!" 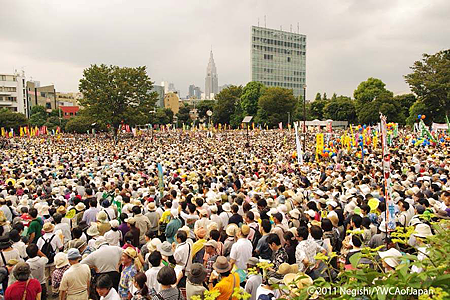 This event, together with action for Goodbye to Nuclear Power Plants 10,000,000 Petition, was promoted by 9 Japan's leading novelist, journalist, musician and such professionals and supported by countless individuals and grassroots groups. YWCA is one of the supporters. 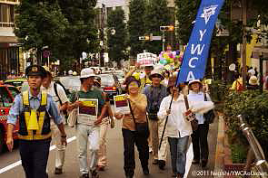 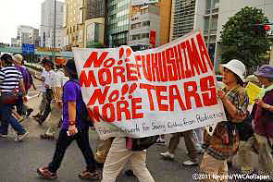 There have been many parades and actions to protest against Tokyo Electric Power Company (TEPCO) and the Japanese government for their responsibilities of the nuclear power plants accidents since 3.11. However, at many times, those grassroots actions have been ignored or minimized by mass-media as if there have nothing been going on. This also prevents people here and there to be united. There is also a tendency in Japanese society where people feel shy to go out on the street to parade and protest although, at heart, they want to do something.

But this day was special: 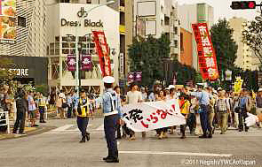 Individuals riding on a train, bus, bicycle to the parade probably couldn't imagine that people right next to them were also going to the parade and having the same idea towards nuclear power plants accident, until they got there and found themselves barely move in the middle of 60,000 people who shared the same feeling —anger, sorrow, will to change the national energy policy. Meeting with others and feeling and confirming that desires of being free from nuclear empowers people to achieve the goal.

What people appealed was not only about nuclear free society. The damaged powerplants are still under severe condition, thousands of people are still removed from their home, and solutions for removing radioactive contamination and nuclear waste have not been found. People called TEPCO and the national government to respond to all those unsolved problems on their full responsibility.

We call your support! To stop nuclear power in Japan also encourages the world to stop its nuclear dependency. Sadly, nuclear business and nuclear contamination is global. Let's make a change!

Join the petition (Online petition is not available as hand written signature is more effective to appeal to):