Mr. Abe's Local Legacy and the Future of Nuclear Power in Japan

In the summer of 2007 I went to Hagi, northern Yamaguchi prefecture, to take part in a revolution. Well, not a revolution per se—but a revolutionary summer school.

We were gathered, some forty Japanese and I, to celebrate the Shōka Sonjuku (School under the Pines), founded 150 years earlier by the inspirational Yoshida Shōin (1830-1859). For an institution that lasted less than two years—Yoshida was executed in 1859 for plotting against the Tokugawa shogunate—the School under the Pines had a disproportionately large influence on Japanese history. 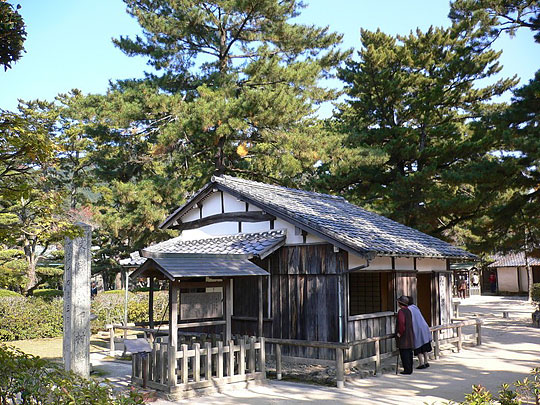 Many of its graduates played leading roles, for example, in the military campaigns by which the Chōshū domain (later Yamaguchi prefecture) defeated the shogunate, leading to the Meiji restoration of January 1868. "Modern Japan Started Here," was the title of the Hagi mayor's lecture at the opening ceremony of our week-long course.

As Sod's Law would have it, the stomach ache that came on during the mayor's lecture turned out to be acute appendicitis, and instead of spending the next seven days with my classmates prancing around Hagi in our souvenir pink and yellow T-shirts ("Hagi Restoration School: Action is the Only Way"), I partook of the services of the city's general hospital, where I thanked my lucky stars that Japan had moved on from one of Yoshida's beliefs, "expel the barbarians." At least, somewhat moved on. Back home in Kaminoseki, in the southeast of Yamaguchi prefecture, I commuted daily to a health clinic in the neighbouring town. There, Dr. Nishi (his name notwithstanding) laughed at the pain intolerance of "westerners" and prodded my stomach with gusto.

To get to the clinic, I would drive across the Kaminoseki Great Bridge, linking Nagashima island to mainland Honshu. "The Great Bridge," locals would tell me proudly during my fieldwork interviews, "we got that built when Satō Eisaku was prime minister." Satō, who hailed from Tabuse town, also in southeast Yamaguchi, was Japan's longest-serving post-war premier (1964-1972). And when I arrived at the clinic, I would walk past a bronze bust of Satō's older brother Kishi Nobusuke, who had also served as prime minister (1957-1960).

Indeed, it was the political ascendance of Kishi's grandson Abe Shinzō, who became prime minister in September 2006, that had led me to Hagi in the first place. I figured there must be a story behind the extraordinarily high number of Japanese premiers in modern times to have come from Yamaguchi prefecture. Mr Abe was the eighth, following in the footsteps not only of his grandfather and great-uncle, but also Itō Hirobumi and Yamagata Aritomo—both prime ministers in the Meiji period (1868-1912), and both graduates of the School under the Pines.

But in September 2007, Mr Abe abruptly resigned. Along with the appendicitis, I took this as a sign that I really should be getting back to that PhD dissertation. I put my jottings and my half-read copy of Mr Abe's book, Towards a Beautiful Country, in a box and assumed that his political career was over.

Now that Mr Abe has triumphantly returned, winning a landslide victory in the general election of December 16, 2012, I've been wondering how he will use his "second chance." He'll want a legacy—all politicians do. After the shambles of his first term, he'll aspire, no doubt, to something as momentous as his grandfather's renewal of the U.S.-Japan Security Treaty (in 1960), or his great-uncle's reversion of Okinawa to Japan (in 1972) and Nobel Peace Prize (in 1974). But if he fails on the international and even on the domestic front, perhaps he'll settle, in future years, for a bronze bust and/or the on-going affection of his local supporters.

And one way to get that, he may figure, would be to restart the stalled plan to build a nuclear power plant in Kaminoseki.

Officially, the Kaminoseki plan has been frozen since October 5, 2012, when newly-elected Yamaguchi governor Yamamoto Shigetarō refused "for the time being" to extend the land reclamation licence held by Chugoku Electric Power Company. Without this prefectural licence, construction on the foundations of the plant, which began in earnest in February 2011 after almost thirty years in the works, could not continue.

Following the licence decision, which reflected the governing Democratic Party's new policy against the construction of planned plants, the Asahi Shinbun called Chugoku Electric's refusal to abandon the Kaminoseki project, and indeed the power companies' continued support for nuclear energy in Japan, "simply baffling." On the contrary, Chugoku Electric's persistence in the face of government policy was completely understandable.

Consider, first, the length of the Kaminoseki dispute and the amount of time and money that has been invested in supporting the town's pro-nuclear lobby over those years. Then there was the fact that Kaminoseki's pro-nuclear mayor was returned to office with a two-to-one majority six months after the Fukushima disaster, indicating that a clear majority of townspeople still supported the power plant plan. Perhaps most important, Chugoku Electric was clearly banking on the likelihood, even in October 2012, that the opposition Liberal Democratic Party, which had strongly supported the Kaminoseki plan since the early 1980s, would soon be returned to power under the leadership of Mr Abe, a leading Yamaguchi politician.

The pre-election LDP manifesto famously stated that the new government should reach a conclusion "within three years" on whether to restart Japan's mostly dormant nuclear reactors—a formula that seems to imply Mr Abe's support for the nuclear power industry. Less widely reported was paragraph 202:

Given the situation in which the economies of nuclear host communities are greatly dependent on, among other things, the employment provided by nuclear power plants and the like, it is obvious that the position of nuclear power in our country's future energy policies will have a major influence on those host communities. We must search for community "potential" (arikata) at an early stage and examine ways that community development may work in tandem with all our energy policies.

The manifesto then promises the establishment of a "Nuclear Host Communities Development Research Centre" to study not only methods of community development but also to locate potential host sites (arubeki genpatsu ritchi).

Exactly what all this means is anyone's guess. Suffice to say, the dilemma articulated by the manifesto—communities that are so "dependent" on the economic riches promised by hosting a nuclear plant that they turn against NIMBY and embrace Definitely In My Back Yard—exactly describes the problem in Kaminoseki. By this reasoning, what will be economically good for Japan (according to a pro-nuclear LDP worldview) will be particularly good for host communities. In all this focus on economics and construction, it is as if Fukushima never happened.

To get a sense of what the new political landscape might mean for Kaminoseki, we can turn to the result in Yamaguchi District No. 2, which includes the town. On the campaign trail, the incumbent Democratic Party representative, Hiraoka Hideo (58), emphasized his outright opposition to the nuclear plan, while simultaneously promising central government support for the town in the absence of nuclear-related subsidies. His challenger, the LDP's Kishi Nobuo (53), instead spoke of Tokyo trying to find the "best mix" in energy provision and thus economic policy. "More important than anything else," he added, referring obliquely to the Kaminoseki plan and implying his support for the pro-nuclear lobby, "is that for 30 years local people supported government policy and expended much effort doing so." As in so many other constituencies around Japan, the LDP trounced the Democratic Party in Yamaguchi No. 2, winning 55 percent of the vote.

Kishi Nobuo is also a grandson of Kishi Nobusuke and great-nephew of Satō Eisaku—and he is the younger brother of Mr Abe. The renewed domination of the LDP in this bastion of Meiji politicians, and the dynastic grip of the Kishi-Abe clan on both local and national politics, therefore suggest that "the wind has changed" in Kaminoseki. Kishi has promised that he will reach a conclusion as to his views on the proposed plant within three-to-five years; this sounds suspiciously like the "wait and see" stance that the nuclear lobby first adopted in Kaminoseki in the 1980s, during which time the plan was advanced behind the scenes.

Those who want a "beautiful country"—or at least a beautiful Inland Sea, and the lessons of Fukushima to be learned—will hope that the Kaminoseki plan remains frozen. But if, as he suggested during a pilgrimage to his grandfather's grave on December 22, Mr Abe has as keen a sense of his political legacy as his Yamaguchi forebearers, perhaps he will conclude that the work towards a restoration of the Japanese economy starts here, in his - or rather his brother's - own backyard.

Martin Dusinberre is Lecturer in Modern Japanese History at Newcastle University, UK. In addition to his book on Kaminoseki, Hard Times in the Hometown: A History of Community Survival in Modern Japan, he has published articles in The Journal of Asian Studies (on nuclear power and civil society, co-authored with Daniel P. Aldrich), Japan Forum (on the prewar Japanese diaspora), and most recently he has a chapter on historical memory in Christopher Gerteis and Timothy S. George (eds), Japan since 1945: From Postwar to Post-Bubble (2012). From 2012 to 2014 he is an Alexander von Humboldt Foundation Research Fellow at Heidelberg University, Germany, where he is starting work on a global history of Japan in the late-nineteenth century.  martin.dusinberre@ncl.ac.uk

Martin Dusinberre, DIMBY: Kaminoseki and the making/breaking of modern Japan

Makiko Segawa, After The Media Has Gone: Fukushima, Suicide and the Legacy of 3.11

Paul Jobin, Fukushima One Year On: Nuclear Workers and Citizens at Risk

Ishimure Michiko, Reborn from the Earth Scarred by Modernity: Minamata Disease and the Miracle of the Human Desire to Live