In the upcoming Tokyo gubernatorial elections, Hosokawa Morihiro could make an astonishing comeback more than a quarter of a century after retiring as Prime Minister. Mainstream and independent media have generally stressed his opposition to nuclear power and his support for green energy alternatives, in contrast to the national government of Abe Shinzō. However, Abe and Hosokawa also represent different poles in another controversial field of   politics – the politics of memory including the fraught question of apologies for war and the regional and global implications of their respective stances.
Abe's visit to the Yasukuni Shrine in December 2013 was only the climax of his career as a historical revisionist. It has been his declared objective to “overcome the postwar regime” and rectify the “distorted image” of Japan’s wartime past rooted in Japanese society. The image that he is referring to, one widely shared not only by Japan’s Asian neighbors but also by its patron and ally the United States, is that of Japan as an aggressor nation in the Asia-Pacific War (1931-45). For Abe, the war was rather one fought for the defense of Japan against the Western colonial powers and for the liberation of East Asia. 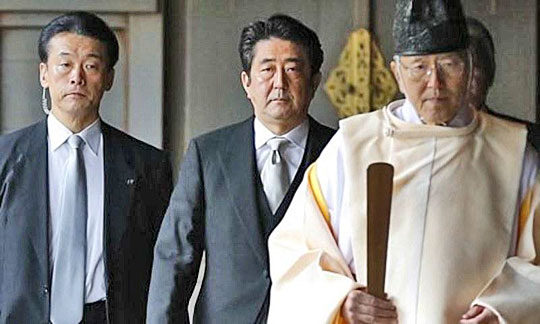 1993 was the beginning of what I call the “golden age of reconciliation.” 1993 saw the first government in postwar Japan without the participation of the Liberal Democratic Party (LDP), which had ruled uninterruptedly since its foundation in 1955. Head of the new government was Hosokawa Morihiro. A former LDP member, he left the party and, in 1992, founded the Japan New Party (Nihon Shintō). After the Japan New Party and a number of other new parties had won a majority of seats in the elections to the House of Representatives in July 1993, Hosokawa was appointed Prime Minister on 5 August. At a press conference on 10 August, he explained his attitude regarding Japan’s wartime history. He stated that he considered “the last war” a “war of aggression” and a “wrong war.” In a debate in the Diet on 23 August 1993, Hosokawa confirmed his position, stating:

After 48 years [from the end of the war], our nation has become one of the nations that enjoy prosperity and peace. We must not forget that it is founded on the ultimate sacrifices in the last war, and is a product of the achievements of the people of previous generations. We would like to take this opportunity to clearly express our remorse for the past and a new determination to the world. First, on this occasion, we would like to express our deep remorse and apology for the fact that invasion and colonial rule by our nation in the past brought great sufferings and sorrow upon many people.

He reiterated his position in the Diet one year later. This was the first time a Japanese Prime Minister had used the terms “war of aggression” and “apology,” and it was Hosokawa’s statement that opened the way for the Murayama Declaration in 1995, which is to this day the official Japanese government position on the Asia-Pacific War.

Hosokawa was not alone in his views. Another party founded in June 1993, the New Party Sakigake, in its foundation statement declared:
We state our firm resolve to not repeat a war of aggression. We will not aspire to become a political and military great power, but will contribute to universal peace and prosperity.

Even within the LDP, voices advocating reconciliation with Japan’s neighbors over historical questions were predominant at that time. Shortly before the demise of the LDP government under Miyazawa Kiichi in August 1993, outgoing cabinet secretary Kōno Yōhei had publicized his famous statement regarding the issue of the so-called comfort women.

Undeniably, this was an act, with the involvement of the military authorities of the day that severely injured the honor and dignity of many women. The Government of Japan would like to take this opportunity once again to extend its sincere apologies and remorse to all those, irrespective of place of origin, who suffered immeasurable pain and incurable physical and psychological wounds as comfort women.

The process of reconciliation would continue after the LDP returned to power. In 1998, Japanese Prime Minister Obuchi Keizō and South Korean president Kim Dae-jung signed the “Japan-Republic of Korea Joint Declaration: A New Japan-Republic of Korea Partnership Towards the Twenty-first Century,” which confirmed that Japan had done “tremendous damage and suffering to the people of the Republic of Korea through its colonial rule, and expressed his deep remorse and heartfelt apology for this fact.”

In the same year, Japan and China also signed a “Joint Declaration on Building a Partnership of Friendship and Cooperation for Peace and Development,” which included confirming statements regarding Japanese war responsibility.

The Movement of Historical Revisionism

Neonationalist elements of the LDP felt highly threatened by these developments. As a direct response to the statements of Prime Minister Hosokawa in 1993,[1] the party formed a committee to study historical issues and summarize its views on the Asia-Pacific War, or the “Greater East Asian War,” as it is called in conservative circles in Japan. Abe Shinzō played an important role as one of the organizers of this “History Examination Committee” (Rekishi Kentō Iinkai).

The committee hosted a series of lectures by academics, journalists and other conservative “opinion leaders” or “critics” between October 1993 and February 1995. Lecturers included well-known war apologists and historical revisionists such as Nishio Kanji, Tanaka Masaaki, Takahashi Shirō, Kobori Keiichirō, Nishibe Susumu and Etō Jun. Most contain harsh criticism of the Hosokawa statement and repeatedly affirm that “the Greater East Asian War was not a war of aggression, but rather a war [undertaken] for self-defense (jison jiei) and […] the liberation of Asia (Ajia kaihō no sensō).”[2] These lectures, along with the committee’s discussions, were published in late 1995 as the “Summary of the Greater East Asia War” (Daitō-A sensō sōkatsu). The book makes many claims about the war that would later become standard revisionist dogma. Throughout the book we find the repeated claim that the war was fought as an unselfish act to liberate Asia from European imperialism and aggression:

The Manchurian Incident, the China Incident and the Greater East Asian War […] were a fight for survival between the colored races and the white race. Since the Russo-Japanese War [1905], the colored races had all depended on Japan to be liberated from colonial rule. Since this would be a terrible blow, the whites united in order to suppress Japan. (…) The Greater East Asian War was a glorious international contribution, a sacrifice without precedent in the history of mankind. […] The Japanese are a righteous people.[3]

The activities of this committee would become the starting point of a movement of historical revisionism fighting against the spread of the idea that the war was a war of aggression. The best-known organization in this movement was the Society to Produce New History Textbooks (Atarashii rekishi kyōkasho o Tsukuru-kai), which has been studied at length by myself[4] and others. Abe Shinzō was continuously at the center of the development of this movement, as the writings of Tawara Yoshifumi and Hayashi Hirofumi (partly translated by Matthew Penney for this journal) have revealed.

The emergence of the movement of historical revisionism led to further developments that signaled the end of the “golden age” of reconciliation. The movement developed quickly, in 2000, in particular. In that year, the new Prime Minister, Koizumi Junichirō, visited the Yasukuni Shrine, a place where Japan's war dead are worshipped (as Gods) and which advocates a view of the war as a war of Asian liberation.

In the same year, the above-mentioned Tsukuru-kai submitted its textbook to the Ministry of Education for the first time, causing a heated domestic and international controversy about history textbooks. 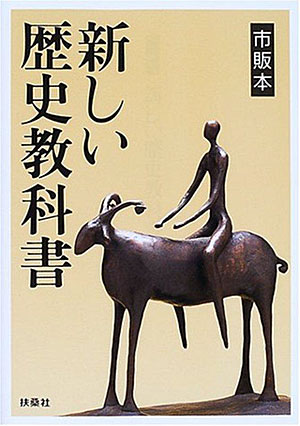 The Tsukurukai New History TextbookOn 9 April 2000, Tokyo governor Ishihara Shintarō, in a speech in front of units of the Japanese Self-Defense Forces (SDF) suggested that the SDF might be mobilized in case of uprisings by foreigners after an earthquake or a disaster in Tokyo. Using the derogatory term “sangokujin” (literally “third-country person”), his discriminatory remarks ignited international outrage.
In another misnomer, Prime Minister Mori Yoshirō in May declared that he considers Japan “truly the Land of the Gods.” Again, international reaction was one of astonishment and consternation.

With Koizumi continuing his annual visits to the Yasukuni Shrine until 2006, the “golden days” of reconciliation were clearly over. With some exceptions, such as Prime Minister Kan Naoto's apology for Japan's annexation of Korea in 2010 and Prime Minister Hatoyama Yukio's visit to the Nanjing Massacre Memorial Museum in Nanjing in 2012, Japan and its neighbors have been drifting apart, a process accelerated by territorial conflicts over Diaoyu/Senkaku islands, other geopolitical issues, and historical memory conflicts such as that with South Korea over the comfort women issue.

Abe Shinzō over the years made contributions to damaging relations with neighboring states. In 2007, he provoked international protests by voicing doubts whether the system of forced prostitution, the comfort women, really involved so much “coercion.”[5] In late 2012, he raised eyebrows even in Washington when he announced his intention to replace, probably in 2015, the Murayama apology statement with a more “forward-looking statement.” In 2013, after becoming prime minister for the second time, he undid important changes to the textbook approval system by eliminating all but in name the “neighboring countries clause,” which was introduced in 1982. It had led to massive changes in the contents of Japanese textbooks, which, since the 1990s, included more or less detailed descriptions of war crimes and frankly discussed war responsibility. In late 2013, Abe visited the Yasukuni Shrine and closed the door on rapprochement with China and Korea as Koizumi had done in the years 2000-2006.

Hopes are high that Hosokawa as governor would push policies to end Japan’s reliance on nuclear power. In this, he is officially supported by former Prime Minister Koizumi – ironically the person who ended the “golden age” of reconciliation with his visits to the Yasukuni Shrine starting in 2000.

Chances are slim that Hosokawa will continue with his contributions to historical reconciliation in East Asia in a way he did in the 1990s, first of all because he is running for a local office, not a national one. But after more than a decade of a rising historical revisionism and provocative statements concerning Japan's war responsibility, he might be able to contribute to restoring sanity to discussions among Japanese and Japan’s neighbors on the history of East Asia in the twentieth century. In order to do so, however, he needs to be elected first.