Jeju and a Naval Arms Race in Asia 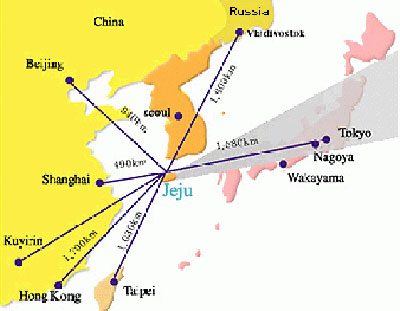 A new naval base on Jeju Island will only make a bad maritime security
situation in Northeast Asia worse.

Maritime security has been a top issue in Northeast Asia recently. The sinking of the South Korean ship, the Cheonan, was a major agenda item at the annual summit that South Korean conducted with Japan and China on Jeju Island last month. Jeju Island is important for another reason. The South Korean government is planning to build a naval base there.

Jeju Island is a special self-governing province located just southeast of South Korea. Its location in the center of Northeast Asia has given Jeju Island a political and geographic advantage. To the east, the island faces Tsushima Island and the Japanese prefecture of Janggi, with the South Sea and East China Sea in between. To the west, Jeju faces Shanghai across the East China Sea. The South China Sea lies south of the island, while the mainland of South Korea lies to the north.

Despite its strategic location, Jeju Island is a strange place for a military base. UNESCO has declared the island a World Heritage site, and it is a popular honeymoon destination. The former Roh Moo-hyun government also designated Jeju as a "peace island." And yet the South Korean government has wanted to build a naval base on the island since 2002. Although there has been strong local resistance, the South Korean government plans to build the base in Geongjeong village, the third proposed site.

Jeju Island has long been a focus of strategic and security interests in Northeast Asia. During World War II, the Japanese used the island to defend Japan from American forces. There were supply bases on the island for 75,000 Japanese soldiers. The U.S. military later attempted to fortify the island after the fall of Japanese empire.

And today, Jeju Island is again the focus of attention. But this time, it is the latest escalation in a naval arms race in Northeast Asia.

Jeju Island's strategic location has become even more important recently because of increased regional interest in maritime security. China and Japan have strengthened their marine military strategy. A 2009 Pentagon report estimated Chinese naval forces to possess 260 vessels, including 75 "principal combatants" — major warships — and more than 60 submarines. Also, the navy receives more than one-third of the overall official Chinese military budget of $78 billion. Because the Chinese government greatly underreports its military spending, however, China's real military budget is more than that.

Meanwhile, Japan has similarly developed its naval military strategy. Japan's Maritime Self-Defense Force (MSDF) deploys perhaps the most modern and capable diesel-electric submarine force in the world. The MSDF has 44,000 military personnel, 18 submarines, 9 frigates boats, and the second largest number of Aegis-equipped destroyers in the world, after the United States.

South Korean President Lee Myung-bak's administration has also joined this effort to increase naval power. According to the 2010 defense budget, spending on naval vessels is increasing 23.7 percent over last year's numbers. The naval base built on Jeju alone was earmarked for 97.5 billion won ($7.8 million). "The investment in the naval ship sector is focusing on securing high-tech destroyers and submarines continually with an aim to improve capability of command of the sea around the Korean Peninsula as well as building up capability to perform landing operation," says Korea Institute for Defense Analyses (KIDA) scholar Peak Jae Ok.

The Cheonan incident, which involved the sinking of a South Korean ship in the Yellow Sea, has pushed the Lee administration to increase naval spending in the 2011 military budget. South Korea has pledged to increase maritime surveillance and national defense R&D to prepare for North Korean provocations. However, director of the Center for Security and Strategy at KIDA, Park Chang-Kwoun, says that "the South Korean government needs to balance military power and advise government officials not to make hasty decisions."

The U.S.-Korea alliance is closely related to this issue. The naval forces of the United States are the most powerful in the world. The U.S. and South Korean government are expanding their military alliance, and if the naval base on Jeju Island is set up, the U.S. navy will use the base to monitor China's naval power. Because of its close location to China, the naval base will primarily be a bulwark against Chinese expansion rather than defend against North Korea threat (for which the bases in Busan and Jinhae are better suited.)

The Jeju naval base is a likely bone of contention between the United States and China because of missile defense. Seoul plans to dock Aegis-equipped destroyers at Jeju. These warships are the main military component of the U.S. missile defense system. According to Xinhua Chinese newspaper, South Korea plans to build a new naval base on the southern island of Jeju to expand the range of its naval operations. U.S. defense contractor Lockheed Martin provides the Aegis combat system to Seoul. "China regards missile defense as the 21st century's greatest threat and is dissatisfied with U.S. missile defense policy," argues Cheong Wook-sik, director of Peace Network in South Korea. China believes that, in the event of a conflict over Taiwan, the United States will inevitably become involved because of missile defense.

South Korea, meanwhile, has indicated its interest in becoming more integrated into the U.S. missile defense system. In this way, by becoming caught in a conflict between China and the United States, the naval base could endanger Jeju Island and the national security of South Korea. According to Lee Tae-ho, deputy secretary general of People's Solidarity for Participatory Democracy in South Korea, "The Chinese government has a response strategy that first attacks U.S. missile defense in the case of an emergency. That means that the Jeju naval base will be targeted in an armed conflict between the United States and China." Even short of war, the base will create tension among China, Japan, and Korea, which could escalate into a naval arms race in the Asia-Pacific region.

Democracy and the Environment

The naval base issue has also become a political hot potato in the recent elections on Jeju Island. Most candidates promised to deal decisively with the conflict between the government and the islanders. But the people of Jeju are very mistrustful of the current Jeju governor's handling of the naval base plan. When the ministry of the National Defense Department decided to build the naval base site in Geongjeong village, the procedure to secure the agreement of the villagers was not transparent. The referendum that took place on May 14, 2007 did not accurately reflect the real opinions of the residents. Four months after the referendum, when the Geongjeong Village People's Council held a vote on the issue, 94 percent of the villagers were against the naval base.

After the recent election on the island, the naval issue became embroiled in more controversy. As soon as the election finished, Captain Lee Eun-Guk of the Jeju naval base business committee announced that the Navy plans to begin construction in the harbor and bay in September. On the other hand, Woo Geun-Min, the newly elected governor, expressed regret over pushing ahead with the naval base plan so precipitously, saying that "Now it's time to respect each other's view." Jeju islanders have appealed to him. But the new governor has not opposed the naval plan in principle. Rather, he has adopted an ambivalent posture.

Last April, 450 Geongjeong villagers filed a suit against the defense minister. The suit maintains that the ministry illegally approved the base plan without carrying out an environmental impact statement. The first court decision on the suit will be handed down on July 15.

In terms of the conflict between islanders and government, the case of the Jeju base is similar to the situation involving the U.S. military base in Okinawa. Former Japanese Prime Minster Yukio Hatoyama resigned after approving the original plan of relocating the Futenma Marine Corps base within Okinawa prefecture. Although acknowledging Okinawan concerns, Hatoyama decided to keep Washington happy. Jeju's new governor, like Hatoyama, is caught between local demands and national priorities.

The naval base issue affects the very existence of the islanders' life. The construction of a naval base not only could raise regional military tensions but also disrupt the ecosystem on the island. There are many cases of environmental destruction due to military bases in the Asia-Pacific region, including Okinawa, Hawaii, and Guam. The South Korean government has argued that tourism and U.S. military bases can coexist. According to Kyle Kajihiro, a leader of the DMZ-Hawai'i / Aloha 'Aina network, "The Korean government's argument that militarization has been good for Hawaii and would be good for Jeju is dead wrong." U.S. marine corps bases in Okinawa, Hawaii, and Guam were constructed in the postwar era before the rise of tourism on these islands. Jeju Island has already been discovered as a tourist destination, so the base will likely cause severe damage to the local economy.

In terms of security, economy, and environment, the Jeju naval base is a risky proposition. It's not a good idea to ignore the dangers. South Korea's naval power can't catch up with China and Japan. Instead of constructing a naval base on Peace Island, South Korea should signal to China and Japan that a naval arms race is simply not worth it.

Sea-power competition also raises some troubling questions about the future of maritime stability in Asia. There are many territorial disputes in the region, and there have been numerous naval clashes. No one wants another Okinawa situation. However, it's possible to preserve maritime security through a nonmilitary cooperative system like the ASEAN Regional Forum (ARF) or the Council for Security Cooperation in Asia-Pacific (CSCAP). Those organizations have played a major role in safeguarding maritime stability by encouraging governments to negotiate with each other. A military base on Jeju Island and a naval arms race in the region, on the other hand, will only make a bad situation worse.