Whole Earth or No Earth: The Origin of the Whole Earth Icon in the Ashes of Hiroshima and Nagasaki 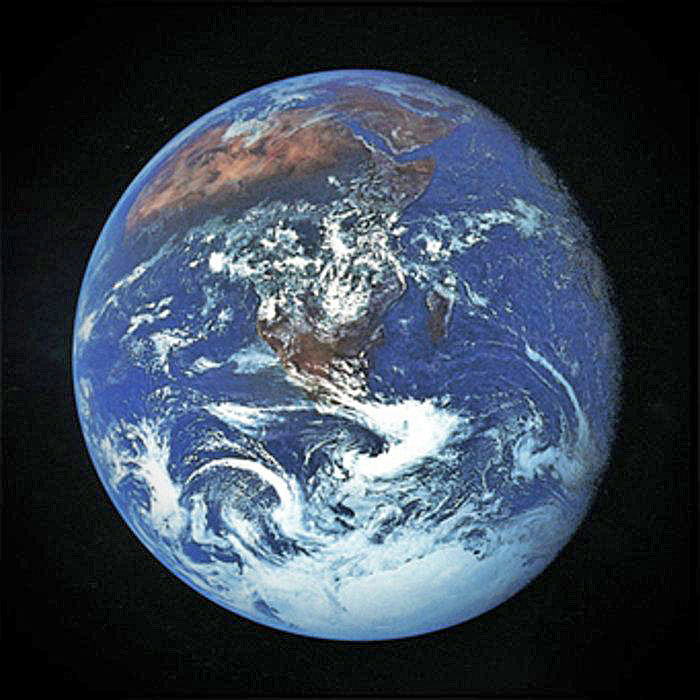 The image of the Whole Earth is one of the most ubiquitous visual icons of the late twentieth century. It is everywhere, on books, posters, advertisements, packaging, and all over the world-wide-web. It is the descendent of such essential early tools of human imagining as the map and the globe, but the Whole Earth is a radical reformulation of those older tools. It is a tool that opens humans to a new perspective about the relationship of the individual to the planet, and to the other creatures living on the planet, especially the other people.
The history of the modern visual image of the Whole Earth derives from photographs taken of the Earth from space. Much as the ability to see deeply into space has completely revised our ideas about the nature of the universe around us, the ability to see our home planet from space, has fundamentally revised our concepts of the nature of the planet on which we live.
Photographs of the Whole Earth entered culture in the late 1960s as a result of the development of satellites and manned space travel. But in this article I will argue that the visual content of the icon of the Whole Earth actually emerged several decades earlier. Before there were color photographs of the Earth from space, the visual image of the Earth as whole was first expressed in a manner we would come to associate with this icon by editorial cartoonists in direct and immediate response to the use of atomic bombs on the Japanese cities of Hiroshima and Nagasaki in 1945.

Robert Jacobs is an associate professor at the Hiroshima Peace Institute at Hiroshima City University. He is the author of The Dragon's Tail: Americans Face the Atomic Age (University of Massachusetts Press, 2010) .

Recommended Citation: Robert Jacobs, "Whole Earth or No Earth: The Origin of the Whole Earth Icon in the Ashes of Hiroshima and Nagasaki," The Asia-Pacific Journal Vol 9, Issue 13 No 5, March 28, 2011.