Dear Friends of the Ecumenical Forum for Korea,
Warm greetings from Seoul!
I am pleased to inform you that we completed to send the 1st food shipment in 2012 to KCF for people in North Korea.

The Ecumenical Forum held a ceremony of sending humanitarian aid to North Korea from Dandong, China on the 15th of March, 2012. One hundred fifty-three tons of flour was sent to Korea Christian Federation by the Amity Foundation. This aid was made possible because of the funds collected by National Council of Churches in Korea in their Christmas appeal. 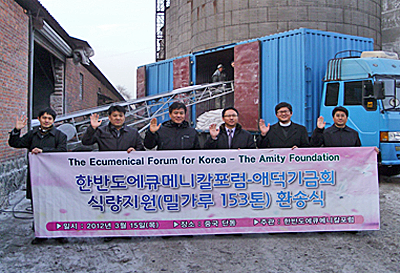 As Jesus loves the world unconditionally, so NCCK will continuously try to resolve hunger of North Korea with the spirit of Jesus. We believe the saving of life is more important than the issues of our government.

With many thanks for your concern and contributions.
Heawon Chae