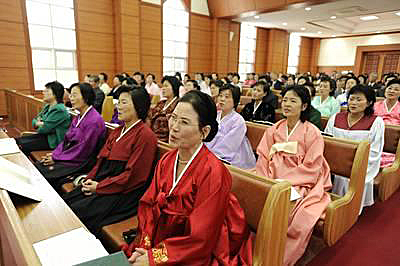 Using a reference from I Corinthians 12, the World Council of Churches (WCC) general secretary the Rev. Dr Samuel Kobia told nearly 200 church members at Bong Soo Church in Pyongyang, North Korea that the "Church is one body in Christ".

Responding with a series of "Amens" the congregation heard Kobia say the WCC will remain engaged with all Koreans, particularly those in the church, in reaching the goal of peace and healing between the two countries and the eventual reunification of Korea.

Kobia, along with accompanying WCC staff, was on a three-day visit to North Korea in advance of a 21 to 23 October consultation being held in Hong Kong on peace, reconciliation and reunification of the Korean peninsula. More than 120 church leaders, including four from North Korea and several dozen from South Korea, and about twenty-five other countries in Asia, Europe and North America, will meet to discuss the various efforts the churches are making toward reunification.

Visiting North Korea at the invitation of the Korean Christian Federation of North Korea, Kobia and the delegation visited three churches on Sunday 18 October.

In addition to visiting the Bong Soo Church the delegation also visited the Chilgol Church in the capital, Pyongyang, and a house church of 12 members in the town of Sunam which is near Pyongyang.

Continuing with the Corinthian example Kobia told the Bong Soo congregation that no church is more important than the other. "The body is whole when all the parts cooperate with each other," he said. "Therefore in his letter to the churches in Corinth, Paul appeals to the community to recognize each other as being a very important part of the body."

The Bong Soo Church was constructed in 1987 with funding from the North Korean government and the Presbyterian Church of Korea. The church is thoroughly modern with a full sound system, balcony and music text on a large screen in front of the church, a video camera system, a high-lofted ceiling and an area for a large choir.

Bibles and songbooks line the seating areas for the congregations. Within the church compound is a recently constructed theological seminary where 12 students are now enrolled to earn degrees in evangelism.

The Bong Soo worship service overflowed with music from the choir, soloists and several women's groups, mostly singing traditional hymns. Asked if the abundance of music was especially for the WCC delegation, a congregation member said no, "this happens every week."

The smaller congregation at the Chilgol Church, which the WCC delegation also visited, has been in existence since the late 1800s. The current building is relatively new, as the original building was destroyed in the Korean War by the U.S. bombing of Pyongyang.

A WCC delegation member asked the congregation about the noticeable absence of children in the churches. While acknowledging this is a challenge within North Korean society, they said the children are involved in a broad range of other activities and some will at a later age come to church. They said it was their job to teach their children at home about Christianity.

On Sunday afternoon the WCC delegation visited a house church of 12 members who meet in a home in the community of Sunam outside of Pyongyang. They said the house church movement within North Korea is growing.

The church meets on Sundays, sitting on the floor of the living room of a member's home. One member brings an accordion to accompany the singing. The singing in the North Korean church tends to be extraordinarily rich and is a key part, along with prayer and teaching, of any worship service.

"There are two main learnings I want us to reflect on this morning," Kobia said to the congregation at Bong Soo. "The first is that we are called to take care of each other. The second is to recognize the need for nurturing the unity which is given to us by Jesus Christ."

In the Korean context the churches in the north and south have shown a great yearning for reunification, Kobia said.

The challenge for the churches of the north and south in Korea will be to continue their contact with one another and maintain hope for peace and healing.

Asked on a separate occasion during the delegation visit about the role of the churches concerning the Korean situation, the Rev. Kang Yong Sop, chairman of the Korea Christian Federation of North Korea, said, "As far as we as Christians are concerned, we can pray."