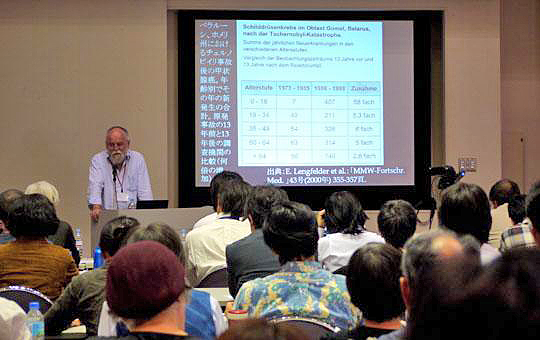 Dissenting voice: Sebastian Pflugbeil, president of the German Society for Radiation Protection, talks about radiation and health at the Oct. 12 forum in Tokyo. TOMOKO OTAKE PHOTO

To whom does scientific debate belong?
That was a central question raised by many of the 200-plus people who attended a citizens’ forum in Tokyo on Oct. 12, as they criticized the ways in which the Japanese government and radiation specialists working for it are assessing and monitoring the health effects of the ongoing nuclear disaster at the Fukushima No. 1 nuclear power plant.

The daylong conference, organized by the Japanese citizens’ groups SAY-Peace Project and Citizens’ Radioactivity Measuring Station (CRMS), featured experts who dispute much of the evidence on which the government has based its health and welfare decisions affecting residents of Fukushima Prefecture and beyond.

Organizers of the event were also demanding that the government take into consideration the views of non-experts — and also experts with differing views from those of official bodies such as the International Commission on Radiological Protection (ICRP). The Japanese government has constantly referred to the ICRP’s recommendations in setting radiation exposure limits for Fukushima residents.

One of the driving forces for the citizens’ forum was a desire to challenge the conduct and much of the content of a conference held Sept. 11-12 in Fukushima, titled the „International Expert Symposium in Fukushima — Radiation and Health Risk.“

That conference, sponsored by the Nippon Foundation, involved some 30 scientists from major institutions, including the ICRP, the World Health Organization, the International Atomic Energy Agency and the United Nations Scientific Committee on the Effects of Atomic Radiation. Although the proceedings were broadcast live on U-stream, the event itself was — unlike the Tokyo forum — closed to the public.

Some citizens and citizens’ groups claimed that this exclusion of many interested and involved parties — and the event’s avowed aim of disseminating to the public „authoritative“ information on the health effects of radiation exposure — ran counter to the pursuit of facilitating open and free exchanges among and between experts and citizens on the many contentious issues facing the nation and its people at this critical time.

In particular, there was widespread criticism after the Fukushima conference — which was organized by Shunichi Yamashita, the vice president of Fukushima Medical University and a „radiological health safety risk management advisor“ for Fukushima prefectural government — that its participants assumed from the outset that radioactive contamination from the plant’s wrecked nuclear reactors is minimal.

Critics also claimed that the experts invited to the conference had turned a collective blind eye to research findings compiled by independent scientists in Europe in the aftermath of the 1986 Chernobyl nuclear disaster in present-day Ukraine — specifically to findings that point to various damaging health consequences of long-term exposure to low-level radiation.

So it was that those two citizens’ groups, angered by these and other official responses to the calamity, organized the Oct. 12 conference held at the National Olympics Memorial Youth Center in Shibuya Ward. Among the non-experts and experts invited to attend and exchange their views were people from a wide range of disciplines, including sociology, constitutional law and pediatrics.

On the day, some of the speakers took issue with the stance of the majority of official bodies that the health damage from Chernobyl was observed only in a rise in the number of cases of thyroid cancers.

Eisuke Matsui, a lung cancer specialist who is a former associate professor at Gifu University’s School of Medicine, argued in his papers submitted to the conference that the victims of Chernobyl in the neighboring present-day country of Belarus have suffered from a raft of other problems, including congenital malformations, type-1 diabetes and cataracts.

Matsui cited a lengthy and detailed report of research by the Russian scientists Alexey V. Yablokov, Vassily B. Nesterenko and Alexey V. Nesterenko that was published in 2007, and republished in English in 2009 by the New York Academy of Sciences under the title „Chernobyl: Consequences of the Catastrophe for People and the Environment.“

Matsui stressed that, based on such evidence, the Japanese government should approve group evacuations of children — at the expense of the plant’s operator, Tokyo Electric Power Co. — from certain parts of Fukushima Prefecture. He cited some areas of the city of Koriyama, 50 to 60 km from the stricken nuclear plant, where soil contamination by radioactive cesium-137 has reached 5.13 Curies per sq. km. That is the same as in areas of Ukraine where residents were given rights to evacuate, Matsui said.

In fact in June, the parents of 14 schoolchildren in Koriyama filed a request for a temporary injunction with the Fukushima District Court, asking it to order the city to send their children to schools in safer areas.

In the ongoing civil suit, those parents claim that the children’s external radiation exposure has already exceeded 1 millisievert according to official data — the upper yearly limit from all sources recommended by the ICRP for members of the public under normal conditions.

Following a nuclear incident, however, the ICRP recommends local authorities to set the yearly radiation exposure limit for residents in contaminated areas at between 1 and 20 millisieverts, with the long-term goal of reducing the limit to 1 millisievert per year.

Meanwhile, Hisako Sakiyama, former head researcher at the National Institute of Radiological Sciences, delved into the non-cancer risks of exposure to radiation. In her presentation, she referred to a report compiled in April by the German Affiliate of International Physicians for the Prevention of Nuclear War (IPPNW). Titled „Health Effects of Chernobyl: 25 years after the reactor catastrophe,“ this documents an alarmingly high incidence of genetic and teratogenic (fetal malformation) damage observed in many European countries since Chernobyl.

Sakiyama also pointed out that the German report showed that the incidence of thyroid cancer due to radiation exposure was not limited to children.

„In Japan, the government has a policy of not giving out emergency iodine pills to those aged 45 and older (because it considers that the risk of them getting cancer is very low),“‘ Sakiyama said. „But the (IPPNW) data show that, while less sensitive compared to children, adults’ risks go up in correspondence with their exposure to radioactivity.“

Further post-Chernobyl data was presented to the conference by Sebastian Pflugbeil, a physicist who is president of the German Society for Radiation Protection. Reporting the results of his independent research into child cancers following the Chernobyl disaster, he said that „in West Germany … with an exposure of 1 millisievert per year, hundreds of thousands of children were affected.“

He noted, though, that any official admissions regarding health damage caused by the 1986 disaster in the then Soviet Union came very slowly and insufficiently in Europe. Indeed, he said the authorities denied there were health risks for years afterward.

In response, an audience member who said he was a science teacher at a junior high school in Kawaguchi, Saitama Prefecture, asked Pflugbeil to exactly identify the level of exposure beyond which residents should be evacuated. While acknowledging that was a very difficult question, the German specialist noted later, however, that he would think pregnant women should probably leave Fukushima — adding, „I have seen many cases over the years, but I come from Germany and it’s not easy to judge (about the situation in Japan).“

At a round table discussion later in the day, as well as discussing specific issues many participants made the point that science belongs to the people, not just experts — the very point that underpinned the entire event. As Wataru Iwata, director of the Fukushima-based citizens’ group CRMS, one of the forum’s organizers (which also conducts independent testing of food from in and around Fukushima Prefecture) put it: „Science is a methodology and not an end itself.“

In the end, though the citizens’ forum — which ran from 9:30 a.m. to 10 p.m. — arrived at no clear-cut conclusions, organizers said that that in itself was a good outcome. And another conference involving citizens and scientists is now being planned for March 2012.