In a first meeting since 2009 and since the 2013 appointment of a new leader for the Korea Christian Federation (KCF) of North Korea, an international group of church leaders from 34 countries, including North and South Korea, met near Geneva, Switzerland, to seek ways to advance reconciliation and peace on the peninsula.

The group also recommends promoting annual ecumenical meetings and consultations involving Christians from both countries in conjunction with the day of prayer.

TO ALL who are concerned about the Abe administration's nationalistic policy
Let's together join in a lawsuit against the Abe Shinzo's officially visiting the Yasukuni War Shrine in violation of the Constitution.

Since our article appeared, there have been several developments that demand the reader’s attention. The scale of electoral interference was found to have been more extensive than we originally reported. Last December, prosecutors investigating the case disclosed that the National Intelligence Service (NIS) had produced over a period of two years leading up to the election some 1900 online posts and approximately 22 million Tweets with political or election-related content—roughly 30% of all election-related content that was generated on Twitter. This was circulated by agents of the NIS’s psychological warfare team and hired contractors.

The trial of former NIS chief Won Sei-hoon, who stands accused of overseeing the spread of messages favorable to the ruling Saenuri Party, is due to begin in the near future. On the other hand, on February 6 Kim Yong-pan, the former Seoul Metropolitan Police chief, was acquitted on the charge of ordering a cover-up of the NIS’s criminal activities after the court deemed the evidence insufficient to establish his guilt, ignoring the testimony of a key whistleblower in its entirety. The conduct of the trial and its verdict were condemned by members of the legal group MINBYUN (Lawyers for a Democratic Society) which criticized the police for limiting the scope of their initial analysis into NIS tweets and failing to fully investigate the online activity of NIS agent Kim Ha-young, the woman discovered on the eve of the presidential election to be spreading pro-Saenuri tweets and social media posts from her studio apartment.

On February 17 the United Progressive Party (UPP)’s left-nationalist lawmaker Lee Seok-ki was found guilty of sedition, plotting an armed rebellion, and National Security Law (NSL) violation based on a transcript from meetings held by Lee and his associates. He and his lawyers have vowed to appeal the verdict. The evidence against Lee, especially the transcript originally circulated by the NIS, was called into question in the course of the legal proceeding, as several original recordings on which the transcript was based proved missing and the transcript itself appeared to substitute extremist language in place of more neutral words. The court, however, largely accepted the case as presented by the NIS and prosecutors. Lee’s conviction on the charge of NSL violation was deemed especially troubling by progressive commentators as it relied heavily on the fact that Lee and his associates had sung “revolutionary” songs from North Korea.

In the upcoming Tokyo gubernatorial elections, Hosokawa Morihiro could make an astonishing comeback more than a quarter of a century after retiring as Prime Minister. Mainstream and independent media have generally stressed his opposition to nuclear power and his support for green energy alternatives, in contrast to the national government of Abe Shinzō. However, Abe and Hosokawa also represent different poles in another controversial field of   politics – the politics of memory including the fraught question of apologies for war and the regional and global implications of their respective stances. 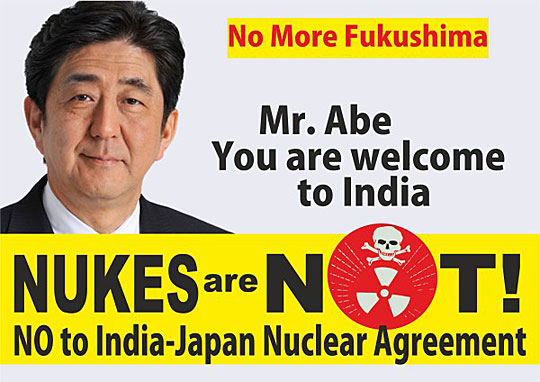 Mr. Shinzo Abe,
You're welcome to India, nukes are NOT!


Please spread the word. Oppose the absurdity of India-Japan nuclear agreement after Fukushima, when Mr. Shinzo Abe is not able to fix Fukushima and all reactors in Japan have been closed down.

Mr. Shinzo Abe, Prime Minister of Japan is going to be India's chief guest for this year's Republic Day ceremony on 26th January.

During visit from 24-26 January, the India-Japan nuclear agreement will also be finalised, which the two governments have been pushing for a long time.

We support better relationship between India and Japan but find a nuclear agreement absurd and unacceptable after Fukushima.

- It is ironical that Japan is selling nuclear technology to other countries while the crisis in Fukushima is further deepening. People evacuated have no hope of returning back and the dangerous leaks of radioactive water are continuing unabated.

- The agreement will give a push to the Indian government's insane and anachronistic nuclear expansion drive which it is implementing through brutal repression of its rural poor. A recent global nuclear safety report has ranked India 23rd last among the 25 countries. The nuclear regular in India is completely toothless and non-independent, as highlighted by the CAG report last year.

The Spirit of Gangjeong

The Spirit of Gangjeong - Episode Nr.3