A special aide to Prime Minister Shinzo Abe on Sunday urged former Chief Cabinet Secretary Yohei Kono to appear before the Diet to explain how Japan’s 1993 apology for the “comfort women” system was compiled, attempting to raise more clouds of doubt over the official government statement. 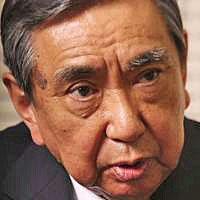 “If he has something to say about it, I would like him to present explanations in the Diet,” the aide, Koichi Hagiuda, said on TV.

But in a speech Saturday, Kono had already said the panel’s report on the findings is completely accurate. “There is nothing to add or subtract,” he said.

On Friday, a government panel said it found confidential records showing Japan and South Korea coordinated closely on the wording of the 1993 apology for Japan’s wartime sexual slavery known as the Kono statement. But the panel also reportedly affirmed the historical facts used to draft it.

The panel said Seoul repeatedly demanded that Tokyo admit it forced Korean women to work at “comfort stations,” and said South Korea would not demand financial compensation for them. The two also reportedly agreed to keep the details of the negotiations secret — an agreement Japan has apparently decided to break.

Although the report lacks a clear conclusion, it suggests Seoul and Tokyo wrestled with the wording rather than with the historical record of the sexual slavery.

Hagiuda, a Lower House lawmaker from Hachioji, western Tokyo, ruled out discussing the report with South Korea, but said it could be used as a tool to explain Japan’s stance amid a push by advocacy campaigns in the United States and elsewhere to set up statues dedicated to the “ianfu,” as Japan calls them.

The panel was headed by former Prosecutor General Keiichi Tadaki, who reportedly said it “concluded that the content of the study was valid,” referring to the Japanese government study that served as the basis for drafting the Kono statement.