2011: The Structure of Japanese Military


Concerning the Structure of Japanese Military 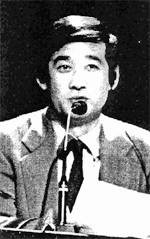 
In pre-war Japan, the Emperor was the head of state and had the authority to oversee the government. The prerogative of supreme command rested with the Emperor. As for the army, the question of who had the command over the expeditionary troops, the Chief of Army General Staff and the Minister of War were to some degree authorized to act on behalf of the Emperor. The former attended to military matters like military operations, and the latter was in charge of the state affairs like the budget. However, orders for important military operations
and appointment of high-ranking personnel were still issued by the Emperor.

The hierarchical organization of the army therefore presents us with a structure that placed the Emperor at the top, followed by the Imperial General Headquarters -- Area Armies -- Armies -- Divisions -- (Brigades) -- Regiments -- Battalions - Companies.

We are talking about total war here; we find nationwide full mobilization that involved the economy, labor, education facilities, local government bodies and other institutions. Looking at local government bodies, the prefecture governor was appointed from among the ranks of Home Ministry officials and key positions in prefecture administration were also appointed from Home Ministry bureaucrats. The Police Bureau of the Home Ministry had full control over the administration of the police in the prefectures. The war was not conducted only through military means, but with full involvement of administrative Organs on the national and local level.

Concrete example of the State's hand in the crime

The Taiwan Colonization Company was a semi-governmental company established with the help from the Government-General of Taiwan, the War and the Navy Ministries, and the Foreign and Finance Ministries.

This example shows that the establishment of "comfort stations" involved not only the military but also the Foreign Ministry, the Governor-General of Taiwan and semi-governmental companies such as the Taiwan Colonization Company.

Spread of the "comfort stations"

As one can see in the Map of where "comfort stations" were, the "comfort stations" Set up by the Japanese military covered more or less the whole area under its control. Towards the end of the war, they were set up in Okinawa and other parts of Japan proper as well.

My conclusion is that within the framework of total mobilization in the Asia Pacific War, the establishment and development of "comfort stations" by the Japanese Military was not only carried out by the total involvement of every section of the Military but also by administrative machinery at every level of Japanese state.

"Outline of the Construction Work in Hainan Island". The Taiwan Colonization Company, July 26. 1939

"On the Naval C0rnf0R Stations in Hainan Island". The Taiwan Colonization Company April 4, 1939