Drucken | E-Mail
in Australia too:

MELBOURNE, Aug 13 (IPS)
Activists here are stepping up their campaign to urge Australia's parliament to pressure the Japanese government to formally apologise to, and compensate, so-called 'comfort women', a euphemism for women across the Asia Pacific region who were forced into sexual slavery by Japan's military during the Second World War. 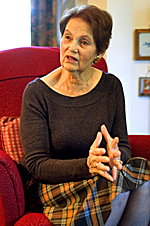 But with Aug.15 marking the 64th anniversary of the war's end, campaigners are concerned that surviving 'comfort women' will not live to hear such an apology or receive compensation and will therefore miss out on a chance to reconcile their traumatic pasts.

AIA says that of the estimated 80,000 to 200,000 women forced to become the sexual slaves of Japan's military from China, Korea, the Philippines, Vietnam, Malaya, the Dutch East Indies and other territories occupied by Japan - as well as from Japan itself - only a small number are still alive.

"There is a time pressure to this issue because the survivors themselves won't be with us for long," says Anna Song, co-founder and national director of the Friends of Comfort Women in Australia (FCWA) support and advocacy group.

She adds: "Every year survivors are passing away."

The FCWA is running a petition drive targeting members of parliament while AIA is conducting a campaign whereby virtual and paper butterflies - the butterfly is the symbol chosen by surviving 'comfort women' to signify hope - will be sent electronically and by snail mail to Australian Prime Minister Kevin Rudd.

The campaigns have been timed to coincide with the international day of solidarity for 'comfort women' on Aug.15.

And with thousands of signatures and butterflies expected to be delivered to Australia’s political representatives shortly, Song says that these grassroots sentiments should be backed by the nation’s federal representatives.

"It’s at a stage, I believe, to mobilise [the support] into political results," she told IPS.

Similar motions have been passed by the lower houses of the Dutch and Canadian parliaments, by the United States' House of Representatives and by the parliament of the European Union. In November last year, the United Nation's Human Rights Committee also urged Japan to apologise.

Japan, for its part, points to apologies such as those contained in the 1993 statement by then-chief cabinet secretary Yohei Kono - now widely referred to as the Kono statement - and the establishment in 1995 of the Asia Women's Fund to provide financial compensation to former 'comfort women' as ways in which it has taken steps to atone for the past.

But such moves have been heavily criticised internationally, with Japan's government being accused of attempting to avoid full responsibility for its military's treatment of women in the Second World War by blaming the forced recruitment of 'comfort women' on private recruiters acting on behalf of the military.

A 1998 report by the U.N. Human Rights Committee noted that although apologies had been made, "the Japanese government denies legal liability for the creation and maintenance of the system of 'comfort stations' and comfort women used during World War II."

Hannah Harborow from AIA says that apologies included in the Kono statement and elsewhere have not been acknowledged by the international community because they were not conducted in a formal capacity.

The Kono statement "wasn’t passed by the Diet," Harborow told IPS. "It was done by an individual and it also didn't state clearly the Japanese government's own role in the system. It side-stepped it."

In Australia, the issue of 'comfort women' has become well known, principally through the efforts of Jan Ruff O'Herne, who was forced into sexual servitude at a military brothel in the Dutch East Indies - now Indonesia - by the invading Japanese.

After being held for two years in a prison camp along with her family, O'Herne, who now lives in Adelaide, was made to line up with other young women aged seventeen and over. Inspected by Japanese military officers, she was among those selected and driven away in an open truck to a Dutch colonial house used as a military brothel.

Having remained silent for 50 years about the rapes and abuses she endured during her three months as a 'comfort woman', O’Herne spoke of her experiences for the first time - both to her family and publicly - in the early 1990s after watching former South Korean 'comfort women' on television calling for an apology and compensation from Japan.

While no other Australians or residents here have come forward to identify themselves as former 'comfort women' unlike the countries of most 'comfort women', Japan did not occupy Australian territory during the war - O'Herne's daughter, Carol Ruff, told IPS that an apology and the offer of compensation from the Japanese government "would bring a sense of closure to my mother and give back the dignity that was lost."

But with O’Herne now approaching 87 years of age, her family is worried at the prospect that neither a formal apology or compensation will be offered in her lifetime.

However, even if Japan does not take the requested steps during the lifetimes of former 'comfort women' like O'Herne in order to rectify, according to campaigners, past abuses, Ruff - who insists that a motion passed in Australia’s parliament will have an impact on Japan - says the battle for justice will continue.

"This issue does not end with our mother. We, her family, will continue to fight for justice for the 'comfort women'. We have stood by her side and share the pain with her," she says. (END/2009)