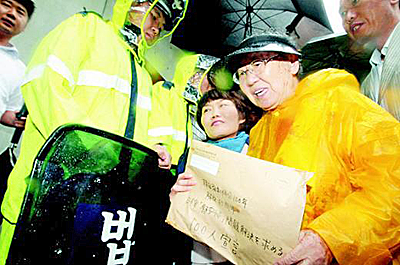 
Surviving comfort women, who had been coerced to serve as sex slaves for the Japanese military during World War II, attempt to enter the Embassy of Japan to South Korea to deliver a document, A One Hundred-person Declaration Calling Upon the Japanese Government to Establish Laws for Resolving the Issues over Wartime Sex Slaves, Issue an Official Apology and Compensate for their Suffering, as South Korean security personnel block the entrance of the building in Jongno, Seoul, Aug. 25.

On this day, four days before the 100th anniversary of Koreas forced annexation by Japan, comfort women and their supporters held the 932nd Wednesday Demonstration to call on the Japanese government to apologize and give compensation for damages.