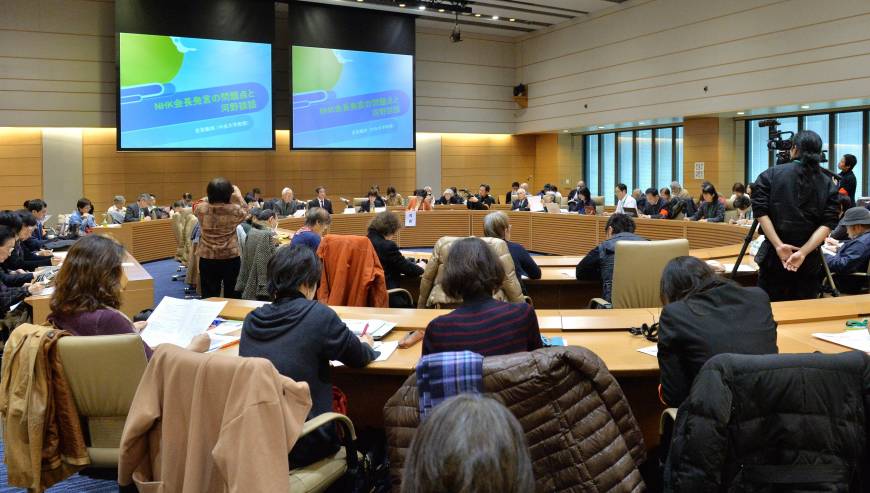 A group of Japanese historians Friday stood behind their government’s 1993 apology over wartime sex slavery, slamming Tokyo’s possible move to revise it as “unforgivable”.

The landmark apology, known as the Kono Statement because it was issued by then-Chief Cabinet Secretary Yohei Kono, acknowledged official complicity in the coercion of females from across Asia into a system of wartime brothels, an issue that draws particular resentment in South Korea.

On March 1, South Korean President Park Geun-hye warned Japan that it would face “isolation” if it pushed ahead with a move to revisit the apology.

But conservative Prime Minister Shinzo Abe’s government has said evidence given by the “comfort women” — the euphemism for those forced to work in military brothels — that forms the basis of the apology is to be re-examined.
Respected historians say up to 200,000 women, mostly from Korea but also from China, Indonesia, the Philippines and Taiwan, were forced to serve as sex slaves in Japanese army brothels.

However, a minority of right-wing Japanese insist there was no official involvement by the state or the military and say the women were common prostitutes.

“It is unforgivable to retreat from the Kono Statement,” Yoshiaki Yoshimi, a professor of modern Japanese history at Chuo University, told academics and rights activists at a Tokyo conference.

“The latest historical documents can allow us to say that the military hurt the honor and dignity of many women.”

Hiroshi Hayashi, a politics professor at Kanto Gakuin University, said he and his fellow researchers discovered at least a dozen new documents proving that there was direct military involvement in the practice.

“There are many more, probably more than 6,000, undisclosed documents that had been stored by the Japanese government,” he said.

“The government has repeatedly said there are no documents remaining to show the military’s direct involvement in the issue. I must say this is an extremely disingenuous attitude.”

Their comments came a day after the U.S. ambassador to Japan, Caroline Kennedy, urged Tokyo and Seoul to patch up their troubled relations.

“I think that the two countries really should and will take a lead in this process, and the United States, being a close ally of both of them, is happy to help in any way that we can,” Kennedy said in an interview aired by NHK.

The Kennedy interview had reportedly been jeopardized after controversial remarks about wartime sex slavery by NHK head Katsuto Momii, who had called the practice “common in any country at war”.