When the European Union received the Nobel Peace Prize in 2012, homemaker Naomi Takasu thought that Article 9 of the Japanese Constitution, which renounces war, is an equally deserving recipient.

Since then, her grassroots campaign to honor Japan's contribution to world peace has attracted a growing number of supporters across the nation.

“Now is the time to spread the importance of the pacifist Constitution to the world,” said Takasu, 37, of Zama, Kanagawa Prefecture, who is also busy rearing her two small children--an elementary school second-grader and a year-and-a-half old infant.

“Children are adorable. If a war breaks out, they will cry,” she added.

In 2012, the Norwegian Nobel Committee selected the EU for the Nobel Peace Prize from 231 nominated individuals or organizations. The reason was that the union of European nations contributed to peace, reconciliation and improvements in democracy and human rights.

At that time, Takasu thought, “Though the EU has some problems, the Nobel Peace Prize has a meaning that it is supporting people who are making efforts toward an ideal. Though it cannot be said that Japan has realized the ideals of Article 9, Article 9 is qualified to receive the award.”

Article 9 states, “Aspiring sincerely to an international peace based on justice and order, the Japanese people forever renounce war as a sovereign right of the nation and the threat or use of force as means of settling international disputes."

It continues, “In order to accomplish the aim of the preceding paragraph, land, sea and air forces, as well as other war potential, will never be maintained. The right of belligerency of the state will not be recognized.”

In January 2013, Takasu sent an e-mail to the Norwegian Nobel Committee’s website, which read in English, “Please award the Nobel Peace Prize to the Constitution of Japan, Article 9 in particular.” However, she did not receive a reply. She sent similar messages six more times, but in vain.

In May 2013, she launched a signature-collecting website, which collected about 1,500 signatures in just five days. She again sent an e-mail to the Norwegian Nobel Committee, this time with the signatures. Then, she received a reply, which detailed the process of nominating candidates for the Peace Prize.

According to the e-mail, the deadline for nominations is Feb. 1 every year. They can come from national parliament members, university professors, directors of research institutes on peace, past recipients of the Nobel Peace Prize and selected others. In addition, only persons or organizations can be nominated for the award, and constitutions cannot.

Reading the reply, she thought about who or what organization could be nominated in relation to Article 9 and concluded that the Japanese people could.

“The Japanese people have abided by Article 9 and have not waged war in nearly 70 years. Therefore, they can become a candidate for the award,” Takasu said, adding, “If they became a candidate, it will be a good opportunity to think about peace.”

She conveyed her efforts to some groups, including the Article 9 Association, a citizens’ group in Sagamihara, Kanagawa Prefecture, which is engaged in protecting Article 9 and has many renowned members, including author Kenzaburo Oe, the 1994 recipient of the Nobel Prize in Literature.

Supporters to Takasu’s efforts grew in rapid succession. In August 2013, she launched the Executive Committee for the Nobel Peace Prize for Article 9 of the Japanese Constitution.

By Feb. 1, the executive committee collected the support of 43 people who are eligible to submit nominations for the Peace Prize. They include university professors and directors of research institutes on peace.

The executive committee sent nomination letters from the 43 nominators and 24,887 signatures to the Norwegian Nobel Committee. Even if it fails in its attempt this year, when the Nobel Peace Prize recipient is announced in October, the executive committee vows to continue its efforts. Therefore, it is continuing to collect signatures on its website at http://chn.ge/1bNX7Hb.

“If voices of the people are gathered together, society will change,” Takasu said. 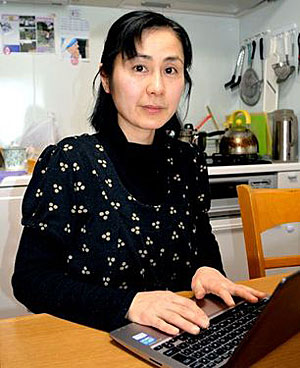