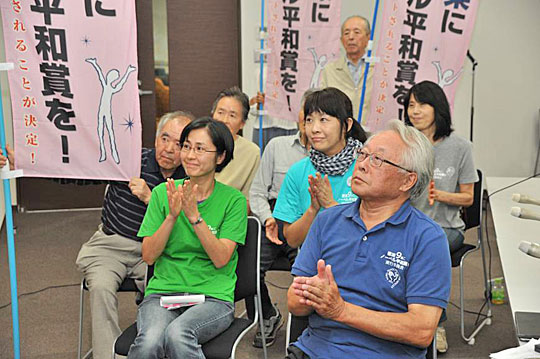 Yoshiaki Ishigaki (right), co-representative of the Organizing Committee for the Nobel Peace Prize for Article 9 of the Constitution, and Naomi Takasu (left), a member of the committee, applaud as the Norwegian Nobel Committee announces the winner of the 2014 Nobel Peace Prize. | KAZUAKI NAGATA

Campaigners who hoped the Nobel Committee would honor all those who support war-renouncing Article 9 of the Constitution were disappointed Friday to hear that this year’s peace prize had passed them by.

But they applauded the committee’s decision and remained defiant, saying they plan to nominate the cause again in 2015.

“To be honest, we did not necessarily think that our efforts would reach the goal in just one year,” said Yoshiaki Ishigaki, one of the leaders of a group calling itself the Organizing Committee for the Nobel Peace Prize for Article 9 of the Constitution. The group initiated contact with the Nobel Committee and honed its bid before the nomination was accepted.

“Whether it takes a year or two years, we will maintain the campaign until we win the Nobel Peace Prize and until the Japanese people come to appreciate Article 9 firmly,” said Ishigaki.

He said that many Japanese are unaware of the role that Article 9, which bans Japan from using force to settle international disputes, has played in protecting them, and that future peace may be at risk under a government that wants to amend the Constitution to get around it.

The committee has collected more than 410,000 signatures over the course of its campaigning, but says it aims to collect 1 million for its renewed Nobel attempt next year.

When it came it was not the news they hoped for. Nevertheless, they applauded the laureates and seemed satisfied with the committee’s decision.

The movement to nominate Article 9 for the peace prize was started by a housewife.

In January 2013, Naomi Takasu, a 37-year-old mother of two from Zama in Kanagawa, emailed the Norwegian Nobel Committee explaining that she supports Article 9 on the grounds that it helps to protect her children.

Other people joined Takasu’s campaign and set up the Organizing Committee for the Nobel Peace Prize for Article 9 of the Constitution.

The group had gathered around 24,000 signatures by August last year and sent a letter of nomination to the Nobel committee. Takasu originally had tried to nominate Article 9 itself but her bid was rejected because, the Nobel Committee said, the prize can only honor people or organizations.

Takasu thus changed the nomination to all those Japanese people who have supported and continue to stand by Article 9.

The committee said in a statement that when it started campaigning the reaction was muted, but that public attention grew when Prime Minister Shinzo Abe’s Cabinet changed the official interpretation of Article 9 — loosening restraints on the use of force and allowing Japan to come to the aid of an ally under attack.

Campaigners got a late boost when the Peace Research Institute Oslo, an independent research institute, tipped them to win.