2015: Confessions of a foreign correspondent 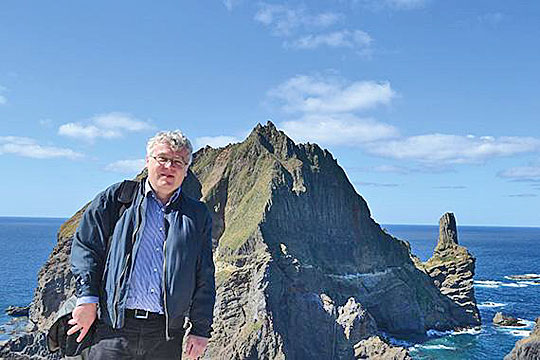 Confessions of a foreign correspondent

My bags are packed, as the song goes. After more than five years as the Tokyo correspondent for the German daily, Frankfurter Allgemeine Zeitung, I will soon leave Tokyo for home.

The country I’m leaving is different from the one I arrived in back in January 2010. Although things seem the same on the surface, the social climate – that has increasingly influenced my work in the past 12 months – is slowly but noticeably changing.

There is a growing gap between the perceptions of the Japanese elites and what is reported in the foreign media, and I worry that it could become a problem for journalists working here. Of course, Japan is a democracy with freedom of the press, and access to information is possible even for correspondents with poor Japanese language skills. But the gap exists because there is a clear shift that is taking place under the leadership of Prime Minister Shinzo Abe – a move by the right to whitewash history. It could become a problem because Japan’s new elites have a hard time dealing with opposing views or criticism, which is very likely to continue in the foreign media.

The Nikkei recently published an essay by their correspondent in Berlin about the February visit to Japan of German Chancellor Angela Merkel. He wrote: “Merkel’s visit to Japan was more conducive to criticism of Japan than friendship. With Japanese experts, she discussed her country’s policy to end nuclear power. She talked about the wartime history when she visited the Asahi and when she met with Abe. She also talked with Katsuya Okada, president of the DPJ, the largest opposition party. . . . Friendship was promoted only when she visited a factory run by a German company and shook hands with the robot Asimo.”

The country I’m leaving is different
from the one I arrived in
back in January 2010.

That seemed harsh. But, even accepting the premise . . . what is friendship? Is friendship simply agreement? Is not true friendship the ability to speak of one’s beliefs when a friend is shifting in a direction that could cause him harm? And surely Merkel’s visit was more complex than just critical.

Let me make my own stance clear. After five years, my love and affection for this country are unbroken. In fact, thanks to the many fine people I’ve met, my feelings are stronger than ever. Most of my Japanese friends and Japanese readers in Germany have told me they feel my love in my writing, especially following the events of March 11, 2011.

Unfortunately, the bureaucrats at the Ministry of Foreign Affairs (MoFA) in Tokyo see things completely differently, and it seems some in the Japanese media feel the same way. To them I have been – like almost all my German media colleagues – a Japan basher capable of only delivering harsh criticism. It is we who have been responsible for, as the Nikkei’s man in Berlin put it, the two countries’ bilateral relations becoming “less friendly.”

The Frankfurter Allgemeine Zeitung is politically conservative, economically liberal and market oriented. And yet, those claiming that the coverage of Abe’s historical revisionism has always been critical are right. In Germany it is inconceivable for liberal democrats to deny responsibility for what were wars of aggression. If Japan’s popularity in Germany has suffered, it is not due to the media coverage, but to Germany’s repugnance at historical revisionism.

My tenure in Japan began with very different issues. In 2010, the Democratic Party of Japan ran the government. All three administrations I covered – Hatoyama, Kan and Noda – tried to explain their policies to the foreign press, and we often heard politicians saying things like, “We know we have to do more and become better at running the country.”

Foreign journalists were often invited by then Deputy Prime Minister Katsuya Okada, for example, to exchange views. There were weekly meetings in the Kantei, the PM’s residence, and officials were willing to discuss – more or less openly – current issues. We didn’t hesitate to criticize the government’s stance on certain issues, but officials continued to try to make their positions understood.

The rollback came soon after the December 2012 elections. Despite the prime minister’s embrace of new media like Facebook, for example, there is no evidence of an appreciation for openness anywhere in his administration. Finance Minister Taro Aso has never tried to talk to foreign journalists or to provide a response to questions about the massive government debt.

In fact, there is a long list of issues that foreign correspondents want to hear officialdom address: energy policy, the risks of Abenomics, constitutional revision, opportunities for the younger generation, the depopulation of rural regions. But the willingness of government representatives to talk with the foreign press has been almost zero. Yet, at the same time, anyone who criticizes the brave new world being called for by the prime minister is called a Japan basher.

Anyone who criticizes the brave new world
being called for by the prime minister
is called a Japan basher.

What is new, and what seems unthinkable compared to five years ago, is being subjected to attacks from the Ministry of Foreign Affairs – not only direct ones, but ones directed at the paper’s editorial staff in Germany. After the appearance of an article I had written that was critical of the Abe administration’s historical revisionism, the paper’s senior foreign policy editor was visited by the Japanese consul general of Frankfurt, who passed on objections from “Tokyo.” The Chinese, he complained, had used it for anti-Japanese propaganda.

It got worse. Later on in the frosty, 90-minute meeting, the editor asked the consul general for information that would prove the facts in the article wrong, but to no avail. “I am forced to begin to suspect that money is involved,” said the diplomat, insulting me, the editor and the entire paper. Pulling out a folder of my clippings, he extended condolences for my need to write pro-China propaganda, since he understood that it was probably necessary for me to get my visa application approved.

Me? A paid spy for Beijing? Not only have I never been there, but I’ve never even applied for a visa. If this is the approach of the new administration’s drive to make Japan’s goals understood, there’s a lot of work ahead. Of course, the pro-China accusations did not go over well with my editor, and I received the backing to continue with my reporting. If anything, the editing of my reports became sharper.

The heavy handedness has been increasing over the past few years. In 2012, while the DPJ was still in power, I took a junket to South Korea, interviewing former comfort women and visiting the contested island of Takeshima (Dokdo to Koreans). Of course it was PR, but it was a rare chance to see the center of the controversy for myself. I was called in by the Ministry of Foreign Affairs for a meal and discussion, and received a few dozen pages of information proving that the island was Japanese.

But things seem to have changed in 2014,
and MoFA officials now seem to
openly attack critical reporting.

In 2013, with Abe’s administration in charge, I was called in once again after I wrote about an interview with three comfort women. This also included a lunch invitation, and once again I received information to help my understanding of the prime minister’s thoughts.

But things seem to have changed in 2014, and MoFA officials now seem to openly attack critical reporting. I was called in after a story on the effect the prime minister’s nationalism is having on trade with China. I told them that I had only quoted official statistics, and their rebuttal was that the numbers were wrong.

Two weeks before the epic meeting between the Consul general and my editor, I had another lunch with MoFA officials, in which protests were made of my use of words like “whitewash history,” and the idea that Abe’s nationalistic direction might “isolate Japan, not only in East Asia.” The tone was frostier and, rather than trying to explain and convince, their attitude was angrier. No one was listening to my attempts to explain why German media are especially sensitive about historical revisionism.

I’ve heard of an increase in the number of lunch invitations from government officials to foreign correspondents, and the increased budgets to spread Japanese views of World War II, and the new trend to invite the bosses of foreign correspondents deemed too critical (via business class, of course). But I would suggest the proponents tread carefully, since these editors have been treated to – and become inured to – political PR of the highest caliber and clumsy efforts tend to have an opposite effect. When I officially complained about the Consul’s comments about my receiving funds from China, I was told that it was a “misunderstanding.”

So here’s my departing message: Unlike some of my colleagues, I do not see a threat in Japan to freedom of reporting. Though many critical voices are more silent than during the DPJ administration, they are there – and perhaps in larger numbers than before.

The closed-shop mentality of the Japanese political elite and the present inability of the administration leaders to risk open discussion with foreign media doesn’t really affect press freedom; there are plenty of other sources to gather information. But it does reveal how little the government understands that – in a democracy – policy must be explained to the public. And the world.

It doesn’t strike me as funny any more when colleagues tell me that the LDP doesn’t have anyone in the press affairs department who will speak English or provide information to a foreign journalist. Nor does the fact that the present prime minister, who claims to be well traveled, has declined to make the short trip to speak to us at the Foreign Correspondents’ Club. In fact, I can only be saddened at how the government is not only secretive with the foreign press, but with its own citizens.

It doesn't strike me as funny any more
that the LDP doesn't have anyone in the press affairs
department who will speak English.

In the past five years, I’ve been up and down the Japanese archipelago, and – unlike in Tokyo – I’ve never had anyone, from Hokkaido to Kyushu, accuse me of writings that were hostile to Japan. On the contrary, I’ve been blessed with interesting stories and enjoyable people everywhere. Japan is still one of the most wealthy, open nations in the world; it’s a pleasant place to live and report from for foreign correspondents.

My hope is that foreign journalists – and even more importantly, the Japanese public – can continue to speak their minds. I believe that harmony should not come from repression or ignorance; and that a truly open and healthy democracy is a goal worthy of my home of the last five great years. ❶

Carsten Germis was the Tokyo correspondent of the Frankfurter Allgemeine Zeitung from 2010 to 2015 and a member of the Board of Directors of the FCCJ.