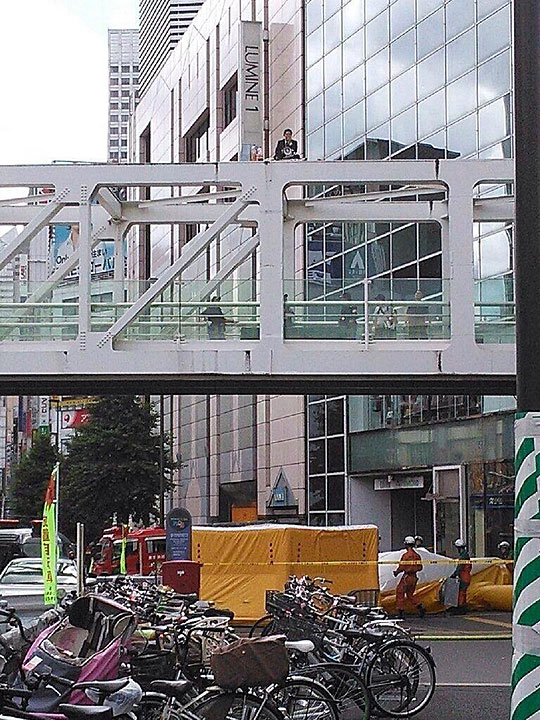 An unidentified man in a black suit tried to commit suicide by setting himself on fire in front of hundreds of people on a bridge near the south exit of JR Shinjuku Station in Tokyo on Sunday afternoon. Police said the man, who appeared to be in his 60s, was seriously injured but is expected to survive. He was being treated at a nearby hospital, a police spokesman told The Japan Times later in the day. Just after midday, the man climbed on top of the girders of a white bridge used by pedestrians to cross busy Koshu Kaido Avenue and stayed there for more than an hour, using a loud speaker to address a rapidly growing crowd of onlookers on the bridge and the street below, witnesses said.

Some people tweeted that the man was denouncing Prime Minister Shinzo Abe’s drive to reinterpret the war-renouncing Constitution so Japan can legally engage in collective self-defense. Officials contacted at Shinjuku’s main police station said they could not confirm what the man said. When police officers and firefighters tried to persuade the man to come down, he poured a liquid, likely gasoline, over his body and set himself on fire, a security guard who witnessed the incident told The Japan Times. “He was engulfed in flames.

Firefighters immediately doused him with water and the man fell” from the girders, said the guard, who only identified himself by his family name of Yamashiro. Online video of the incident shows the burning man standing as he pours something over his head and back, and then crouching down. A firefighter then climbs a ladder to pull him down, spreading bigger flames. After the fire was extinguished, the man was taken off the bridge and down to the road, which links the station’s south entrance to a shopping area on the other side.

Several police officers then wrapped him in a blue plastic sheet and carried him away, Yamashiro said. Crowds of pedestrians near the station — one of the busiest areas in downtown Tokyo — gawked as the situation developed. “Everybody who happened to be there stopped to watch what was happening. The moment the man set himself on fire, the audience burst into screams, and we were all left in total shock,” said Yuto Ishida, 19-year-old college student who witnessed the fire. The man appeared to be carrying a big bottle, and Ishida said he first thought he was merely drunk.