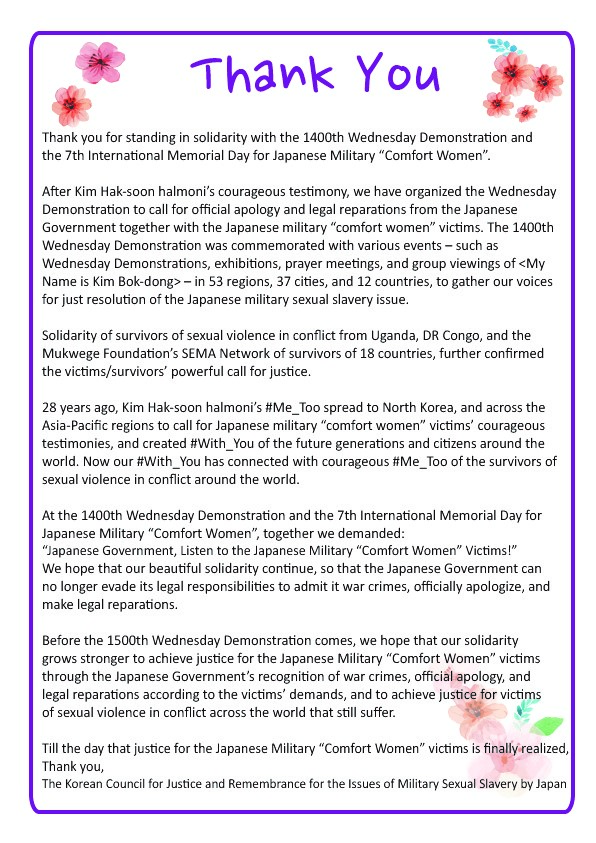 28 years ago, Kim Hak-soon halmoni shouted “I am the very evidence” and first revealed the crimes of the Japanese Government. Kim Hak-soon halmoni’s courageous testimony crossed the border to North Korea and spread across the Asia-Pacific region to draw victims’ #Me_Too.

Japanese military “comfort women” victims’ courageous testimony spread beyond the Asia-Pacific region to reach the international community including the United Nations, and drew the UN’ s attention to the issues of sexual violence in conflict including the Japanese military sexual slavery, Bosnia, Kosovo, and etc.

Furthermore, the victims’ testimony pushed the United Nations Human Rights Council to demand punishment of the perpetrators for the crimes of Japanese military sexual slavery and to establish principles to restore and protect the rights to reparations for victims of wartime sexual violence, which are grieve violations to the international human rights and humanitarian laws as the Japanese military sexual slavery. The victims’ testimony also dedicated to the proclamation of June 19 as the International Day for the Elimination of Sexual Violence in Conflict. ....