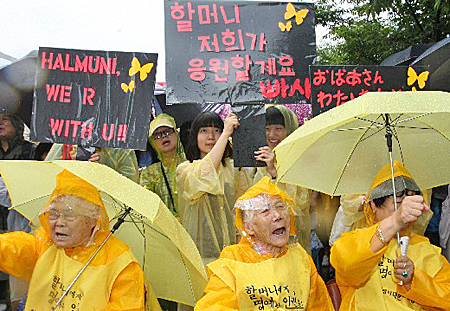 Six women who had been forced into sexual slavery by the Japanese military during World War 2 hold their 878th Wednesday demonstration in front of the Embassy of Japan in South Korea with approximately 300 members of civic organizations on Aug 12, three days before the national holiday commemorating Korea’s independence.

The Wednesday Demonstration has been held every Wednesday since Jan 8, 1992 when activists attempted to secure a Japanese government apology during then-Japanese Prime Minister Kiichi Miyazawa’s visit to South Korea.

More than 30 organizations representing women from six other nations joined the demonstration in solidarity, including women from Japan, Taiwan, the U.S., and Australia.