Across much of Fukushima’s rolling green countryside they descend on homes like antibodies around a virus, men wielding low-tech tools against a very modern enemy: radiation. Power hoses, shovels and mechanical diggers are used to scour toxins that rained down from the sky nearly 31 months ago. The job is exhausting, expensive and, say some, doomed to failure. 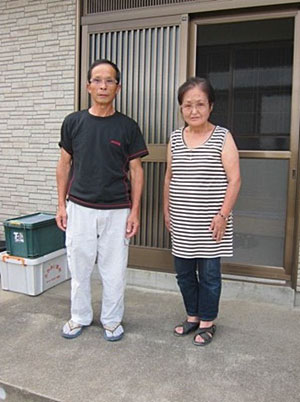 Saito Hitoshi and TeruoA sweating four-man crew wearing surgical masks and boiler suits cleans the home of Saito Hiroshi (71) and his wife Terue (68). Their aim is to bring average radiation at this home down to 1.5 microsieverts an hour, still several times what it was before the accident but safe enough, perhaps, for Saito’s seven grandchildren to visit. “My youngest grandchild has never been here,” he says. Since 2011, the family reunites in Soma, around 20 km away.

For a few days during March 2011, after a string of explosions at the Daiichi nuclear plant roughly 25 kilometers to the south, rain and snow laced with radiation fell across this area, contaminating thousands of acres of rich farming land and forests Over 160,000 people near the plant were ordered to evacuate. The Saito’s home fell a few miles outside the 20-km compulsory evacuation zone, but like thousands of others they left voluntarily. When they returned two weeks later their neat, two-story country house appeared undamaged but it was blanketed in an invisible poison only detectable with beeping Geiger counters.
Nobody knows for certain how dangerous the radiation is. Japan’s central government refined its policy in December 2011, defining evacuation zones as “areas where cumulative dose levels might reach 20 millisieverts per year,” the typical worldwide limit for nuclear power plant engineers. The worst radiation is supposed to be confined to the 20-km exclusion zone, but it dispersed unevenly: less than 5km north of the Daiichi plant, our Geiger counter shows less than 5 millisieverts a year; 40km northwest, in parts of Iitate Village, it is well over 120 millisieverts.


Those 160,000 people, most of whom left with nothing on a freezing cold night in March 2011, have not returned and are scattered throughout Japan, and as far away as Europe and North America. The nuclear diaspora is swelled by thousands of voluntary refugees. Local governments are spending millions of dollars to persuade them to come back, dividing the cleanup with the central government, which handles the most toxic areas.
The price tag for cleaning a heavily mountainous and wooded area roughly half the size of Rhode Island (2000 sq. km) has government heads spinning. In August, experts from the National Institute of Advanced Industrial Science and Technology put the total cost of decontamination at $50 billion. Many experts believe that figure is too low. Ironically, much of the responsibility for the cleanup has been handed over to the nuclear and construction powerhouses that built the Daiichi plant with all its design failures: Toshiba and Hitachi, Taisei Corporation and Kajima Corporation.
Saito’s home falls within the boundaries of Minamisoma, a city that has never recovered from the disaster. Most of its 71,000 population fled voluntarily from the Daiichi accident 20 km south. A third have yet to return, spooked by lingering radiation and the fear of another calamity at the still unstable facility. “We’ve worked hard to make our city livable again,” says Mayor Sakurai Katsunobu. “But everything we’ve done could be for nothing unless the problems at the plant are fixed.”
Fighting radiation is now one of Minamisoma’s few growth industries. The city has set up a permanent office to coordinate decontamination with a budget this year alone of about $230 million. Since last September, a crew of 650 men has labored around the local streets and countryside, cleaning schools, homes and farms. By the end of 2013, the operation will employ nearly 1,000 people – a large chunk of the town’s remaining able-bodied workforce.
Radiation levels in most areas of Fukushima have dropped by around 40 percent since the disaster began, according to central government estimates, but those figures are widely disbelieved. Official monitoring posts almost invariably give lower readings than hand-held Geiger counters, the result of a deliberate strategy of misinformation, say critics.
“They remove the ground under the posts, pour some clean sand, lay down concrete, plus a metal plate and put the monitoring post on top,” says Ito Nobuyoshi, a farmer who opted to stay behind in the heavily contaminated village of Iitate and record the impact of radiation on crops, animal life – and himself. “The device ends up 1.5 meters from the ground.”
Ito has become well known for monitoring the monitors, recording his observations online. He says the local municipality checks radiation in about 40 places, separately to government monitoring posts, collecting figures that are on average 20 percent higher. The readings are published in national newspapers. “Of course this has a huge impact on data, radiation dose calculations and so on,” he says. “I asked the mayor, why don’t you protest to the central government? But the municipality isn't doing anything to fix this situation.”
Our limited survey supports Ito’s observations. On the day we visited, August 29, 2013, the monitoring post outside Iitate Village Office read 0.47 microsieverts p/h. Our device put radiation at the post at 1.07, nearly twice as high. A few meters away it was twice that figure again.
The disagreement over real radiation levels is far from academic. Local municipalities are desperate for evacuees to return and must decide on what basis, in terms of exposure to radiation, evacuation orders will be lifted. If they unilaterally declare their areas safe, evacuees could be forced to choose between returning home and losing vital monthly compensation from Tokyo Electric Power Co. (Tepco), operator of the ruined Daiichi complex.
For the refugees, a worrying precedent has already been set in the municipality of Date, which lies outside the most contaminated areas. In December 2012, the local government lifted a “special evacuation” order imposed on 129 households because of a hotspot, arguing that radiation doses had fallen below 20 millisieverts per year (20 mSv/yr). Three months later the residents lost the $1000 a month they were receiving from Tepco for “psychological stress.” 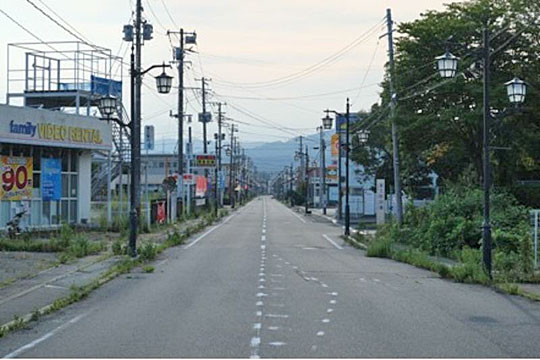 Still, local leaders say they believe the decontamination will work. “Field tests have demonstrated we can bring levels down to 5 millisieverts per year and that is our objective,” insists Kanno Norio, mayor of Iitate. He accepts that “some” residents might refuse to return until exposure falls further – the limit recommended by the International Commission on Radiological Protection is 1 mSv/yr. But he insists nobody will be excluded from any relocation plan."It's all a question of balance, of where to put our priorities. In the end, we need to reach a consensus as a community.”
The differences over what constitutes “acceptable” radiation levels will inevitably complicate policy over the return of evacuees. Local leaders like Kanno and Sakurai set limits lower than central government requirements. “The government says we don’t need to get radiation down to 1millisievert a year but that’s not how we see it,” says Sakurai. The central government, however, is sticking to its guns on its original limit.
“In principle, the threshold of 20 millisieverts remains valid,” says Matsumoto Shintaro, of the Cabinet Office’s Support Team for Residents Affected by Nuclear Incidents. “But the lifting of evacuation orders won’t be decided on the basis of radiation doses alone. It will also depend on the status of each municipality’s infrastructure, whether the community is able to function, and the understanding of residents. The government plans to define a specific policy by the end of 2013.”
The Fukushima cleanup, however, faces another, perhaps insurmountable challenge: securing sites to store contaminated soil, leaves and sludge. Many landowners balk at hosting “interim” dumps – in principle for three years – until the central government builds a mid-term storage facility. Local governments throughout Japan have refused to accept the toxic waste, meaning it will probably stay in Fukushima for good. The waste is stored under blue tarpaulins across much of the prefecture, sometimes close to schools and homes.
Makita Kunihiro, who heads Minamisoma’s decontamination office, accepts that storage is the biggest difficulty it faces. “We need 19 sites according to our estimates, and we have seven.” The city’s contracts with landowners are usually signed for a minimum of three years, but Ito says the timeframe is simply not believable. “Nobody believes that temporary storage will be for only 3 years.”
Yoshizawa Masami, who runs a beef farm in Namie, is harsher in his criticism of the decontamination work. Yoshizawa opted to stay behind after the compulsory evacuation order, in effect making his cattle - and himself - into guinea pigs. “Do you think anyone is going to come back here and live with this level of radiation,” he asks. “With no shops or schools or infrastructure? It’s a joke.” 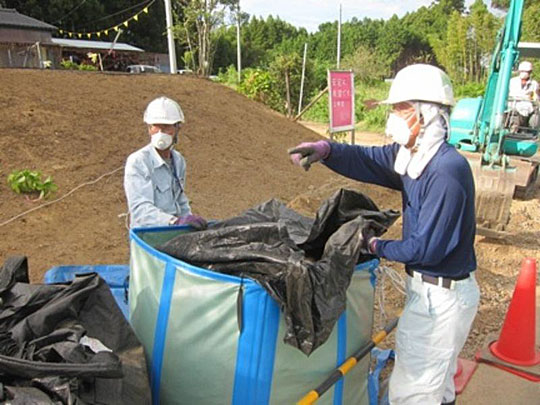 At the Saito home, the decontamination crew has finished a 10-day shift, power-hosing his roof, digging drains and removing 5cm of topsoil from his land. The cleanup has cut radiation by about half, but in the trees a few meters behind his house, the reading is 2.1 microsieverts. “Unless you do something about those trees, all your work is useless,” he berates an official from the city.
The problem, in miniature, is replicated around the heavily and wooded prefecture. The hills and mountains that ring Minamisoma and divide it from Fukushima city further west are particularly contaminated. Radiation washes down again from these hills into detoxified land, polluting it all over again. The only obvious solution – chopping down and burning the forests – would be an ecological nightmare.
Sometime, perhaps, the decontamination crew will have to return to Saito’s house, he speculates. “Whatever happens, we will never have what we had before. It’s clear that my grandchildren will never come here again.”

David McNeill writes for The Independent and other publications, including The Irish Times, The Economist and The Chronicle of Higher Education. He is an Asia-Pacific Journal coordinator and coauthor ofStrong in the Rain: Surviving Japan's Earthquake, Tsunami and Fukushima Nuclear Disaster (Palgrave Macmillan, 2012).

Miguel Quintana is a freelance journalist and translator based in Tokyo. A regular contributor to Nuclear Intelligence Weekly (Washington DC) and correspondent for Le Soir (Belgium), he is an Asia-Pacific Journal associate