About 267,000 people are still living in temporary housing and other makeshift facilities nationwide as Japan marks the third anniversary Tuesday of the March 2011 earthquake and tsunami in Tohoku that triggered an unprecedented nuclear crisis. 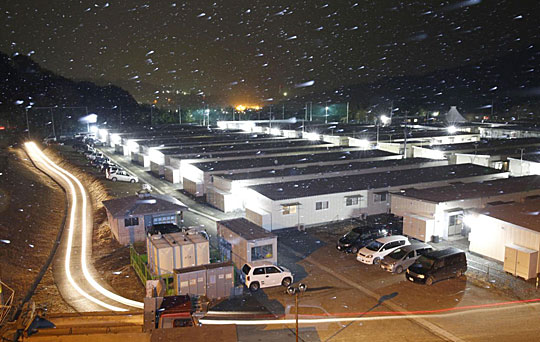 Police and other authorities continue to search coastal areas for people still listed as missing after the 9.0-magnitude Great East Japan Earthquake — one of the most powerful temblors on record — and subsequent tsunami left thousands dead, unaccounted for, or homeless.

After the offshore quake struck at 2:46 p.m., tsunami engulfed large parts of the northeast coast, forcing the evacuation of up to about 470,000 people.

The disaster-hit communities are still struggling with a host of woes, including lagging reconstruction and an exodus of residents.

Ahead of the third anniversary, Prime Minister Shinzo Abe renewed his pledge to help those affected rebuild their lives.

“I want to make the upcoming year (one) in which people in the disaster area can really feel reconstruction,” Abe said at a news conference. “From now on, I’ll emphasize not only the hard side of reconstruction, but also reconstruction of their hearts.”

According to the National Police Agency, 15,884 people were confirmed killed, mostly in Iwate, Miyagi and Fukushima prefectures, and 2,636 were still missing as of Feb. 28.

In the meantime, deaths caused by suicide or the physical and mental stress of staying in shelters continue to rise and totaled 3,048 as of Monday.

Based on Reconstruction Agency statistics as of Feb. 13, more than 97,000 people remain in makeshift residences in Miyagi, Iwate and Fukushima, home of the Fukushima No. 1 nuclear plant, where hydrogen explosions and three reactor core meltdowns tainted large parts of the prefecture with radiation.

Japan has been thrust into a debate about the use of atomic power because of the Fukushima crisis, characterized as the world’s worst nuclear disaster since Chernobyl in 1986.

All 48 of the nation’s commercial reactors are now offline, but the government wants to restart those that clear newly established safety regulations despite strong public opposition.

According to a recent survey by NHK, nearly 80 percent of the public thinks the country should either reduce its contingent of nuclear reactors or abandon them all. The survey, conducted in November and December last year, covered 3,600 people nationwide aged 16 or older, and drew 2,459 replies.

As survivors gather to pray for the souls of their relatives and friends at memorial services, some communities have chosen to commemorate the event in advance to avoid the media attention.

Municipalities in Fukushima Prefecture, which continues to grapple with the fallout from the nuclear crisis, held memorial services Sunday.

“Tuesday is a weekday and we do not have a big facility that can host a ceremony,” a city official said. “And it is easier for many people who lost their families to go on a Sunday.”