The staggering loss of life and property still overwhelms people who were caught up in the historic magnitude-9.0 earthquake and tsunami that hit the northeast coast three years ago, and for many of the survivors, rebuilding their lives has been a slow process. 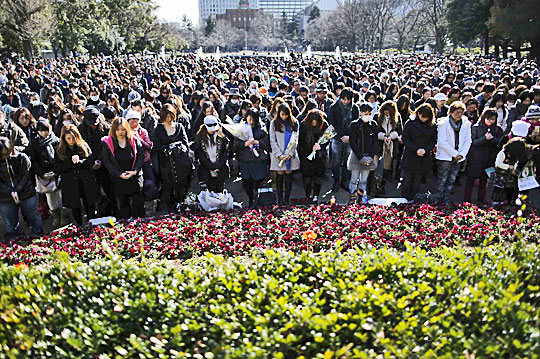 People at a rally in Tokyo on Tuesday observe a moment of silence at 2:46 p.m., the time the magnitude-9.0 quake struck off Tohoku in 2011. | REUTERS

The nation on Tuesday marked the third anniversary of the March 11, 2011, Great East Japan Earthquake with prayers for more than 18,000 people who died or remain missing, while more evacuees joined lawsuits against the government and Fukushima No. 1 plant operator Tokyo Electric Power Co.

Disaster-struck communities continue to struggle, with thousands of evacuees still living in temporary housing, including many forced to leave their homes amid the Fukushima No. 1 meltdown calamity.
Memorial services were held across the country, with a moment of silence observed at 2:46 p.m. when the massive quake occurred and forced the evacuation of about 470,000 people in the ensuing chaotic days.

A government-sponsored memorial ceremony was held in Tokyo, with some 1,200 people attending, including Emperor Akihito, Prime Minister Shinzo Abe and about 30 people from Iwate, Miyagi, and Fukushima prefectures who lost family members.

“We’d like to offer again deep condolences to the victims of the quake disaster and their families,” the Emperor said.

“Many disaster-hit victims are still leading a difficult life in the afflicted areas and places where they have evacuated to,” he said. “My heart still aches when I think about the fact that many people have yet to have prospects of returning to their homes.”

As the Emperor pointed out, the agony of survivors lingers.

Some 134,000 of them are from Fukushima Prefecture. Most are believed to be evacuees from contaminated areas around the Fukushima No. 1 nuclear plant, where three reactors suffered core meltdowns and spewed massive amounts of radioactive fallout.

In a speech at the ceremony in Tokyo, Mikiko Asanuma, 50, who represented bereaved families from Iwate Prefecture, said she now keenly feels how precious were the days she spent with her son, who was killed in the disaster.

When she found her son among more than 200 bodies after the tsunami receded, she couldn’t accept the reality, she said.

“We, the survivors, should keep handing down (the memories) of victims and grief and chagrin of their bereaved family members” to future generations “by word of mouth,” Asanuma said.

Yukari Tanaka, 27, from Fukushima Prefecture, said she learned 40 days after the disaster that her missing father had been found dead in their house, which had been swept away by the monster tsunami.

She is among Fukushima people who were ordered to evacuate because of the nuclear crisis.
In her speech, Tanaka said she will never forget the profound frustration she felt because she could not go back to her town to look for her father.

“My father was a very nice person who put his family first over everything,” she said. “We should learn lessons from (the tragedy) that took the precious lives of many people, including my father, and we need to face them for the rest of our lives so that things like this will never happen again.”

The confirmed death toll from the disaster stands at 15,884 — many of the victims drowned as tsunami more than 20 meters high swallowed vast swaths of coastal towns and villages. Another 2,633 people remained missing as of Monday, according to the National Police Agency. More than 3,000 people have died since the disasters from stress-related factors, including suicide, with many of these fatalities coming among people living in evacuation centers.

In the Tokyo court suit, 234 evacuees from 73 households newly demanded ¥4.6 billion in damages. The plaintiffs include a Tepco employee who was working at the nuclear plant at the time of the meltdowns in March 2011 and is now on sick leave.

New damages suits were filed by 167 people at the Tokyo, Okayama, Saitama and Matsuyama district courts.

At the Tokyo court, 43 people from 21 households who have vacation homes in Fukushima Prefecture filed a new lawsuit demanding a total of ¥1.3 billion in damages for their properties.

Police and the Japan Coast Guard conducted search operations Tuesday for people still missing along the shores of the Pacific in Iwate, Miyagi and Fukushima prefectures as relatives cling to hope of recovering the remains of their loved ones.

The government has allocated ¥25 trillion for reconstruction for the five-year period starting in fiscal 2011, up from an initial ¥19 trillion, but the road to recovery appears long, with the country facing a host of concerns, including radioactive contamination.

Despite the government’s declaration in late 2011 that the nuclear crisis is under control, the public remains anxious about the safety of nuclear power.

All nuclear plants in Japan are now offline, but despite strong opposition the government wants to restart reactors that satisfy new safety regulations. 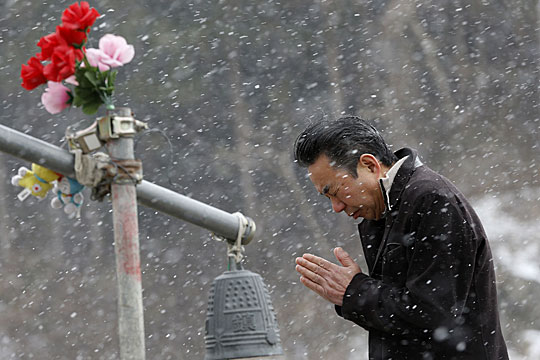 A man prays Tuesday in front of the main entrance of Okawa Elementary School in Ishinomaki, Miyagi Prefecture, where 74 of the 108 students went missing after the March 11, 2011, tsunami. | AP 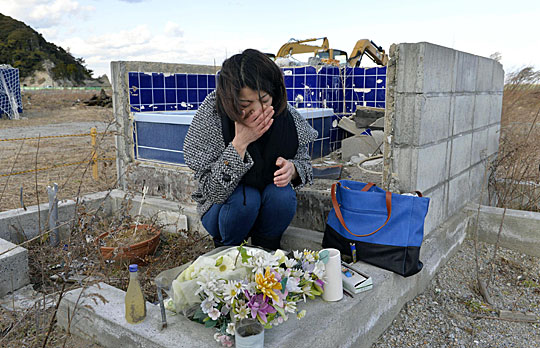 Makiko Suzuki, 41, cries Tuesday at the remains of her house in Iwaki, Fukushima Prefecture, where she had lived with her parents before they were killed by the tsunami. | KYODO 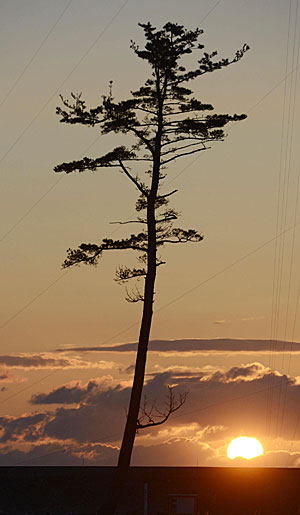