Three years after it was devastated by monster tsunami, the Fukushima No. 1 nuclear plant continues to be plagued by numerous problems as it lurches through the decades-long process toward decommissioning.

The most troubling problem is dealing with the buildup of radioactive water, which is increasing at a rate of 400 tons in the reactor buildings every day, and another 400 tons of lightly contaminated water that seeps daily into the Pacific.

Experts say Tokyo Electric Power Co. and the government will be wrestling with these problems, and the task of removing the highly toxic contaminants from the water, for years and maybe decades, but at least it has become clearer what measures will need to be implemented thanks to simulations of the groundwater flow.

Meanwhile, the hurdles remain high, including winning the OK of local residents and people in the fishing industry to dump “uncontaminated” groundwater into the sea, and successfully creating an underground frozen wall the likes of which the world has never seen.

Around the plant, about 1,000 tons of groundwater flow daily into several permeable layers, 400 tons of which seep into the reactor buildings.

To cool the melted fuel, Tepco has been injecting water into the three damaged reactors. Water that has touched the fuel and has become highly radioactive is leaking from the reactors into the building basements, where it mixes with the groundwater seeping in.

Another 400 tons of groundwater reaches the ocean after moving through a contaminated area near the sea.

Stopping this cycle is crucial, but fully solving the water issue is years away at best and Tepco and the government are planning various measures.

“The groundwater is a big headache and a major source of the groundwater is rainwater,” said Atsunao Marui, a groundwater expert at the National Institute of Advanced Industrial Science and Technology, a Tokyo- and Ibaraki-based semipublic research body.

Marui is on a government panel discussing how to deal with the tainted water issue.

In December the panel issued a report that included an analysis of the groundwater flow around Fukushima No. 1.

“From the analysis, we can evaluate what measures would work to stop how much amount of water, which helps (Tepco) estimate how much time and money will be needed,” said Marui.

Measures under evaluation include creating the long underground frozen wall around the buildings to block the groundwater, paving over a wide area of the site with asphalt or other material to prevent rainwater from going underground and becoming contaminated, and by pumping groundwater to the surface before it reaches the reactor buildings.

The panel’s simulations show the plant gets 1,545 mm of rainfall a year, of which about 845 mm reaches underground. That equates to about 2.4 million tons of water for the 3-sq.-km site, Marui said.

The report said that paving wide areas of the site would be an effective step in preventing rainwater from getting underground. The panel estimated that if 1.7 sq. km of the facility is paved, it would reduce the amount of water reaching the reactor building basements to 160 tons a days.

Additional measures, such as the frozen underground barrier and pumping out the groundwater before it gets to the basements, could bring the total down to 30 tons.

“It is important to divert the upstream groundwater and rainwater to discharge it into the sea before they get contaminated. This will significantly reduce the amount of tainted water that has to be processed by ALPS and help implement measures more effectively,” Marui said.

ALPS, which stands for advanced liquid processing system, is a high-tech treatment system that can remove all radioactive materials except tritium from water.

Tepco hopes to discharge tritium-tainted water after diluting it below the legal limit, but it has faced opposition from the local fishing industry. This has left it with no choice but to store the tritium-laced water at the plant.

Unfortunately, the measures explored by the panel face their own hurdles, Marui said.

Although it is important to pump groundwater to the surface and block rainwater from getting underground, Tepco and the government still have not gotten residents or the fishing industry to sign off on dumping water into the Pacific, including tritium-tainted water.

Even though Tepco plans to dump the water before it gets contaminated, the fishing industry is concerned about the harm this would have on its image.

“The plan to pump the upstream groundwater is extremely important to solving the tainted water issue (and) the government will continue to carefully explain that (to the fishing industry),” industry minister Toshimitsu Motegi said in February.

As for the frozen wall, which is expected be built next year, questions remain about whether it will even work.

Hundreds of pipes will be installed underground to create an icy 1.4-km-long perimeter around the reactor buildings.

An underground frozen wall of this size has never been built, leaving its odds for success uncertain.

Marui is concerned that melting could occur in one of the layers where the groundwater flows relatively fast.

While the buildup of tainted water is a headache, the escape of water into the sea is another issue.

Tepco revealed last June that high levels of radioactive materials were detected in groundwater in the area between the turbine buildings and the sea, where the groundwater and seawater intermingle.

The utility has been injecting liquid glass into the ground to create barriers near the coastline and pumping groundwater up before it can get into the sea, but it has not been able to fully stop the problem.

Tepco believes the source of the groundwater contamination is radioactive water that has accumulated in underground trenches linking the reactor 2 and 3 turbine buildings and pump rooms close to the ocean.

The basement floors of the turbine buildings are filled with highly radioactive water, which is apparently leaking into the trenches.

Fukushima No. 1 was built on a maze of trenches connecting each turbine building. They house cables and pipes needed to transport electricity and water. The underground pipes are installed to bring in seawater for cooling purposes.

“These trenches are largely responsible for the groundwater contamination of cesium and strontium, so I think the first step is to clean up the trenches,” said Seiji Takeda, principal researcher in the environment research group at the Japan Atomic Energy Agency.

Takeda, who is also a member of a Nuclear Regulation Authority panel monitoring the tainted water issue, said that if Tepco can clean up the trenches, the groundwater will be much less contaminated.

Takeda also said the underground frozen wall will be a key measure as it is imperative to keep the water in the turbine buildings from escaping and contaminating the groundwater. 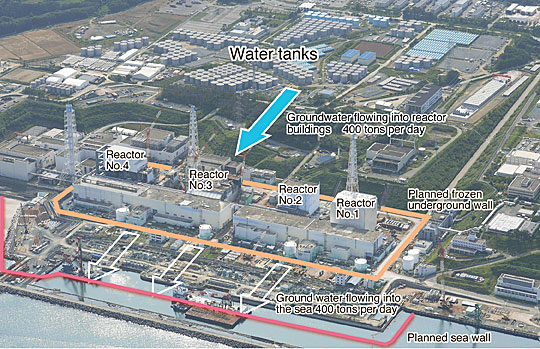 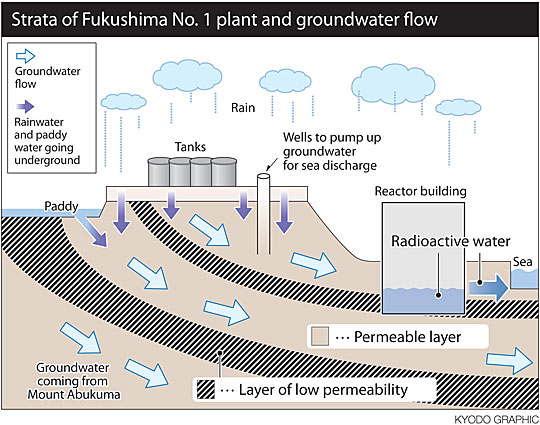 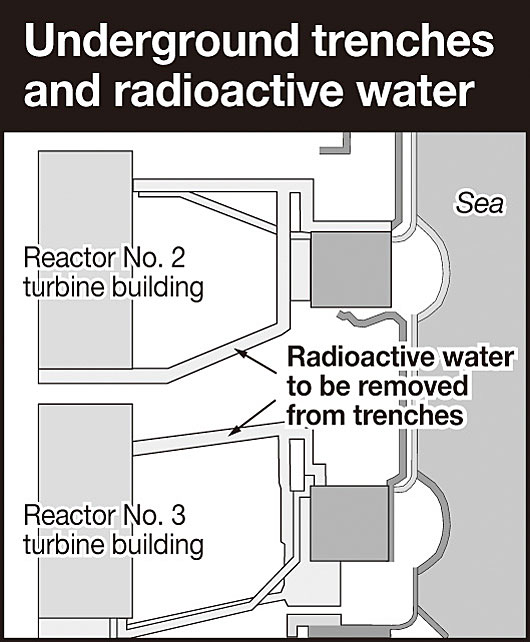