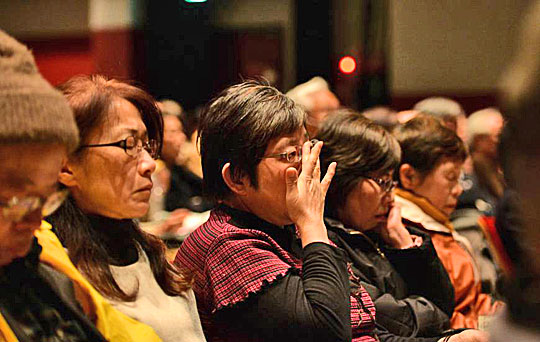 Hundreds rallied Saturday in Tokyo to protest a decision by prosecutors to drop charges over the Fukushima nuclear meltdowns, meaning no one has been indicted, let alone punished, nearly three years after a calamity ruled “man-made.”

Official records do not list anyone as having died as a direct result of radioactive fallout after the tsunami unleashed by the 9.0-magnitude quake of March 11, 2011, crashed into the Fukushima No. 1 plant, swamping cooling systems and causing three reactor meltdowns.

Excluded from those records are Fukushima residents who committed suicide owing to fears about the fallout showered on their hometowns, while others died during the evacuation process. Official data released last week showed that 1,656 people have died in the prefecture from stress and other illnesses related to the nuclear crisis.

“There are many victims of the accident, but no one” has been charged, chief rally organiser Ruiko Muto, 61, told the protesters, displaying a photo of the village of Kawauchi, which fell inside the no-go zone designated by the government around the stricken power plant.

“We are determined to keep telling our experiences as victims to pursue the truth of the disaster, and we want to avoid a repeat in the future,” she said.

The giant tsunami that smashed into the northeast coast swept approximately 18,500 people to their deaths and wiped entire communities off the map. Three years later, tens of thousands of people are still unable to return to their homes around Fukushima No. 1, with scientists warning some areas may have to be abandoned altogether.

“I used to grow organic rice. . . . But I can’t do so any more because of consumers’ worries over radioactive contamination,” Kazuo Nakamura, 45, a farmer from the city of Koriyama in Fukushima, told the rally.

“I want officials of (No. 1 plant operator) Tokyo Electric Power Co. and officials and bureaucrats of the central government to eat Fukushima-grown rice,” he shouted to applause.

A parliamentary report has said Fukushima was a “man-made” disaster caused by Japan’s culture of “reflexive obedience,” and not only attributable to the tsunami of March 2011.

Some 15,000 people whose homes or farms were doused with radioactive materials from the crippled No. 1 plant filed a criminal complaint in 2012 against central government and Tepco officials. However, prosecutors last September decided not to charge any of them with negligence.

Campaigners immediately appealed the decision to the Committee for the Inquest of Prosecution, which has the power to order the defendants be tried. The committee members comprise 11 citizens who are chosen at random by lot.

But since the appeal had to be filed in Tokyo instead of Fukushima, campaigners said the move was “aimed at preventing us from filing a complaint against their decision in Fukushima, where many residents share our anger and grief.”

“We want to share with many people in Tokyo our anger and sadness over the fact that no one has taken responsibility three years after the accident,” one of the organizers, Miwa Chiwaki, 43, said.

Junko Honda, 48, evacuated to Hokkaido with her family amid the crisis, said her son had to drop out of the education system after high school because the family’s income was slashed.
“We can never forgive Tepco and the government,” she said.

Campaigners allege that state officials and Tepco executives failed to take measures to bolster the plant against a natural disaster of the magnitude of the Great East Japan Earthquake and tsunami. They also hold them responsible for delays in announcing how the radiation was projected to spread from the No. 1 plant.

But prosecutors decided to exempt all of them, saying Tepco and government officials could not have anticipated such a powerful quake and tsunami, and that they had found nothing wrong with the post-disaster response given the environment of crisis.

Yet Hiroyuki Kawai, a lawyer representing the campaigners, said “there were lots of measures that officials could have taken to prevent the disaster.”

“We won’t give up (pushing for) indictment of the officials,” he said.

Campaigners last year filed a separate complaint to prosecutors over Tepco’s handling of the buildup of massive amounts of contaminated water used to cool the No. 1 plant’s wrecked reactors, accusing the utility of committing pollution-related crimes.

Separately, senior Tepco and government officials face several civil lawsuits that were filed by thousands of plaintiffs seeking compensation for mental and financial damage. The plaintiffs are demanding the full restoration of their hometowns to the pre-disaster state.