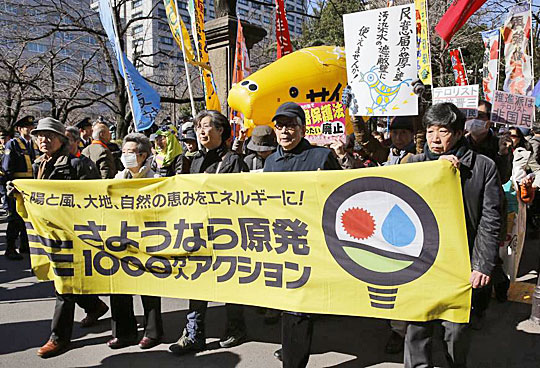 Over 5,000 rally in Tokyo against nuclear reactor restarts

More than 5,000 anti-nuclear campaigners rallied in Tokyo on Saturday as the government and utilities move toward restarting reactors in Kyushu.

The protesters gathered at Hibiya Park in central Tokyo to urge the government not to approve the reactivation of any nuclear plant. Regulators are currently reviewing whether to allow Kyushu Electric Power Co. to fire up two reactors at its Sendai atomic power plant.

“Japan is prone to earthquakes. We have to seriously think about whether nuclear power is a good idea for Japan,” said Masatoshi Harada, 60, who joined fellow protesters at the park and marched with them later toward the Ginza shopping district.

“This is an opportunity for Japan to abandon nuclear power,” he said.

Last week, tens of thousands held a rally at the same site to voice fears about any reliance on nuclear power.

Saturday’s event came days after the nation marked the third anniversary of the 9.0-magnitude quake and tsunami that swamped Tohoku’s coastline on March 11, 2011, setting in motion the Fukushima nuclear crisis. The twin natural disasters killed 15,884 people and left another 2,633 still unaccounted for.

They also knocked out cooling systems at the Fukushima No. 1 nuclear plant, where three reactors suffered core meltdowns and a fourth was badly damaged by hydrogen explosions. The wrecked reactors spewed massive amounts of radioactive fallout over the region.

No one is officially listed as having died as a direct result of the nuclear meltdowns, but at least 1,656 people have died as a result of complications linked to stress and other factors after having to evacuate their homes.

Supporters of nuclear power, including Prime Minister Shinzo Abe, say the country needs atomic energy to revive the world’s third-largest economy. But protesters argue that Japan can live without nuclear power, as it has done for a prolonged period.

All of the nation’s 50 commercial reactors have remained offline due to tense public opposition to restarting them. “Nuclear plants have been closed, so you cannot say we cannot live without nuclear energy,” one of the protesters, Junichi Okano, said Saturday.