Survivors cling to memories of lost and missing

SENDAI – Communities in the northeast marked the third anniversary of the March 2011 earthquake and tsunami Tuesday with ceremonies commemorating those who lost their lives in the disaster, which devastated the region and triggered the Fukushima No. 1 nuclear crisis.
At a disaster monument in Sendai, people who lost loved ones gathered early in the morning to lay flowers. 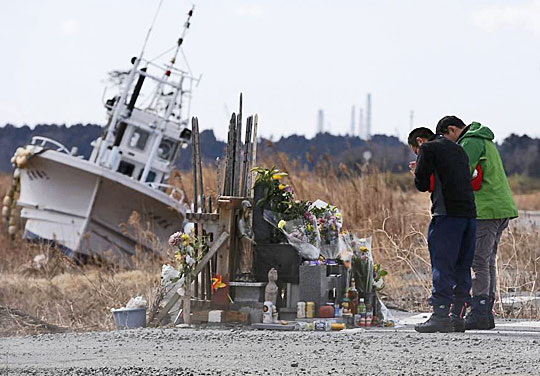 Among them was Toshihiko Daigaku, 59, who lost his parents, wife, a brother and a nephew.
“I will continue living in my own way,” he said, revealing his message for the departed.
A 53-year-old city official visited the monument with his wife.

“We still have a long way to go to complete the reconstruction. . . . There are many people without their own houses. The challenge is how we can fulfill the hope of those who want to return to where they were.”

Hideko Yamada, 64, who lives in temporary housing in Sendai, traced the monument with her fingers to find the names of her two grandchildren.

Her grandson, Yutaro, was 5 years old and getting ready for his first day of school when he was lost in the disaster.

“Why did you have to die?” Yamada lamented.

In Natori, also in Miyagi, Matsuro Tamada, 84, cried as he mourned the 10 relatives he lost in the disaster.

“Three years have passed, but I remember it as if it were yesterday,” he said.

In the village of Yamamoto, a 70-year-old man flew a kite on the waterfront where he often took his grandson, a junior high school student who was killed in the disaster.

“I thought my grandson would be mad at me if I didn’t do this,” he said. “Losing him has been even harder than losing my own parents. Every year I cry and cry.”

Down the coast in Soma, a 39-year-old woman who lost her parents and grandparents finally saw their names engraved on a freshly unveiled monument.

“I’m glad my family is enshrined here as proof they lived here,” she said. “I will never forget them.”

In Otsuchi, Iwate Prefecture, Misuzu Kubo, a 16-year-old high school student, is still waiting for her father, Mamoru, who has been missing since March 11, 2011.

Her 37-year-old father was swept away by the tsunami while heading to a hotel on the coast to rescue its guests as a member of the local fire department.

She now sleeps in his bed, saying she sometimes thinks “my father may come home some day.”