Tohoku kids stressed, haunted by trauma
Anxieties bottled up amid life in shelters with parents living under duress

MINAMISOMA, FUKUSHIMA PREF. – Almost every day around a dozen students seek out nurse Akemi Idogawa at their temporary junior high school in Minamisoma, Fukushima Prefecture, hoping she will help ease their trauma. 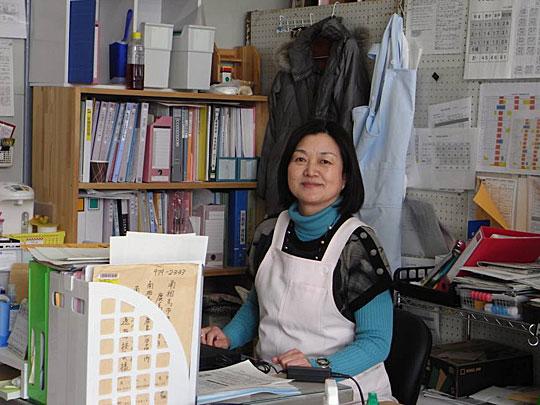 Many at the prefabricated school, in the city’s Odaka district, also live in temporary housing, after they and their families were forced three years ago to flee their homes because of the meltdowns at the Fukushima No. 1 power plant.

Some of the kids tell Idogawa about their aches and pains. But when she offers them a bed to nap on, they usually prefer to sit and just talk.

They speak about the frustration in their daily lives as evacuees living in temporary housing, about bullies at schools they used to attend. They voice the anxieties they have been carrying since the March 11, 2011, Great East Japan Earthquake and tsunami wiped out some of their former communities, and their uncertainties about the radiation-tainted future.

Idogawa said talking brings some relief to the suffering students.

“Many of the students don’t want to return to their classrooms until I listen to their stories,” Idogawa, 60, said.
Three years after the earthquake and tsunami took the lives of nearly 16,000 people, many child survivors are gradually adapting to their new environment and moving forward with their lives. But there are still many who suffer from the loss of loved ones, homes and the lives they led before disaster struck.

Idogawa said they need emotional support to cope, and to pour out their feelings.

The original Odaka junior high is within 20 km of the crippled Fukushima No. 1 plant in Minamisoma, an area still designated as an evacuation zone. The city hopes to reopen the school in 2016 but is uncertain how many students will return. It is also uncertain how much radioactive contamination remains.

The Odaka school originally had some 380 students. It now has a roster of 94, most of them living in crowded temporary housing or other government-prepared accommodations. Four students were killed by the tsunami.
The kids don’t have their own rooms at home or a garden to play in.

Since autumn 2011, they and their teachers have had to hold class in a gray, two-story prefabricated school that is constantly shaking from nearby construction work. Sand enters through gaps in the floors and sounds reverberate from adjoining classrooms separated by narrow walls.

The nurse’s office is the only place aside from their classrooms and a dark corridor where the students can take a break, Idogawa said.

“Three years have passed. But it will take much more time for these children to gain a sense of belonging or to be able to make efforts toward self-realization,” she said, noting the children bottle up their emotions as they see their parents also suffering anxiety over an uncertain future.

After the 1995 Great Hanshin Earthquake, the number of elementary and junior high school children who were assessed as in need of mental care peaked three years after the temblor and resulting fires took the lives of more than 6,400 people, according to the Hyogo Prefectural Board of Education.

A health ministry survey taken between September 2012 and June 2013 said 33.8 percent of the children in Iwate, Miyagi and Fukushima prefectures who were aged 3 to 5 at the time of the disasters, which hit their prefectures the hardest, exhibited symptoms of post-traumatic stress disorder, including sleeping problems and flashbacks. That was nearly 10 times higher than the 3.7 percent logged for children in Mie Prefecture in Kansai, who were surveyed for comparison.

Another recent government survey found that in fiscal 2012, truants at elementary and junior high schools rose by 7.1 percent to 2,511 in Miyagi Prefecture and by 5 percent to 1,566 in Fukushima. The national average has been declining for the past five years.

Although it’s unclear how the disaster correlates with the spike in truancy, experts believe the increase partially comes from the stress caused by losing loved ones and the drastic changes in living environment.

And many parents are unable to provide the emotional support they once did because they, too, are overwhelmed with stress from the need to earn a living, find jobs, or weigh an uncertain future.

As more people leave temporary housing to make a fresh start in life, it causes those who stay behind to become increasingly lonely and suffer growing anxiety, psychiatric experts said.

Children tend to be influenced by their parents’ circumstances and mental states, they said.

As of Feb. 10, about 267,000 evacuees were still living in temporary housing and other accommodations, according to the Reconstruction Agency.

In Fukushima, 11 municipalities are still partially or fully designated as evacuation zones, some so contaminated from radioactive fallout that the government doesn’t know when residents can return.

Toshihiro Seino, 48, a physical education teacher at Naruse Mirai junior high school in Higashi-Matsushima, Miyagi Prefecture, said a year after the disasters, he began to notice students displaying problematic behavior, including bullying and violence. The kids were from a school that was lost to the tsunami.

This behavior increased when the kids had to use a temporary school for a few months.

“Nothing good happens when you confine students in small spaces,” Seino said.

In March 2011, out of 156 students, three were killed by the tsunami, eight lost their mothers or fathers, and 30 to 40 students lost grandparents, Seino said.

To help the students cope, Seino has asked them to write down what they are feeling in daily life.
A girl who lost her mother to the tsunami wrote about her unease 1½ years after the disaster.

“I’m on the verge of losing the memory of my mother. The words we exchanged on the morning of the disaster, her voice, her face and the way she moved. It is more and more difficult to recall her, and it scares me. I hate myself for forgetting her,” she wrote. After writing down her thoughts, the girl told Seino that her spirit lightened.

“Pain is something individuals have to deal with at their own pace. Some students can express their sorrow soon after suffering a loss. There are also those who try to contain their sorrow. I hope they have somewhere to let out their true feelings,” Seino said.