Kin sue over tsunami deaths of 23 kids at Miyagi school

SENDAI – The relatives of 23 elementary school students killed in the March 2011 tsunami in Ishinomaki, Miyagi Prefecture, filed a lawsuit Monday blaming the city and prefecture for the school’s failure to evacuate them to higher ground. 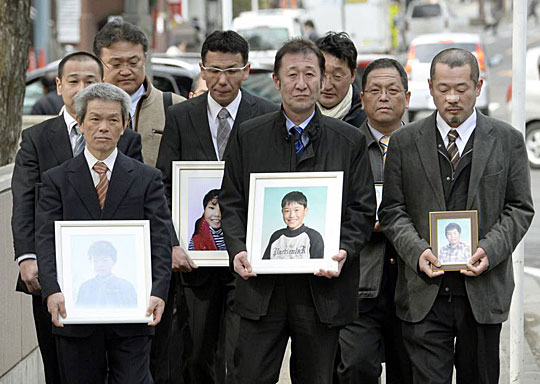 In the lawsuit, filed at the Sendai District Court, the plaintiffs are demanding that the municipal and prefectural governments jointly pay ¥100 million in damages for each victim.

At city-run Okawa Elementary School, 74 of the 108 students died or remain unaccounted for, and 10 of the 13 teachers and school officials died in the wake of the earthquake and tsunami on March 11, 2011.

The school was around 4 km inland from the coast.

According to the complaint, the school had the students wait in the school yard for 50 minutes until the tsunami arrived without taking them to the mountain behind it, although it could have anticipated the danger from the tsunami warning and other information.

In the first court ruling in a damages suit filed by relatives of tsunami victims against operators of facilities in the disaster-hit areas, the district court last September ordered a kindergarten, also in Ishinomaki, to pay ¥177 million over the deaths of four children who were riding its bus when it was caught by the monster waves, determining the kindergarten could have easily grasped that massive tsunami would arrive in the area after the quake.

Only 55 percent of eligible households have applied for grants for housing reconstruction since the March 2011 disasters, signalling that rebuilding remains sluggish three years on, a survey said Monday.
The survey was based on data from the governments of the three northeastern prefectures worst hit on March 11, 2011 — Iwate, Miyagi and Fukushima.

While affected households are eligible for up to ¥2 million to repair their homes or build new ones, those mainly in the tsunami-hit coastal areas haven’t been applying as quickly for the grants recently due mainly to problems with acquiring land.

Officials of the prefectures said the supply of land eligible for housing in coastal areas is lagging because it takes time to create building lots in upland and mountainous forest areas.