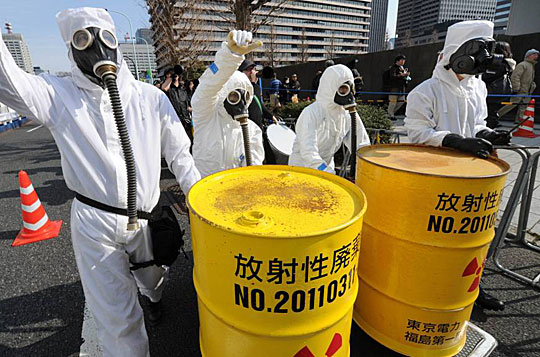 Thousands turn out for anti-nuclear rally in Tokyo

Thousands of people turned out for an anti-nuclear rally in Tokyo on Sunday as the nation prepares to mark the third anniversary of the Fukushima disaster.

Demonstrators congregated at Hibiya Park, close to government buildings, before marching around the Diet.

They gathered to voice anger at the nuclear power industry and the government of Prime Minister Shinzo Abe, who is pushing to restart dozens of nuclear reactors in the world’s third-largest economy despite the triple meltdown in March 2011 that tainted much of Fukushima Prefecture with radiation and heavily damaged its economy.

“I felt that it’s important that we continue to raise our voice whenever possible,” said Yasuro Kawai, a 66-year-old businessman from Chiba Prefecture.

“Today, there is no electricity flowing in Japan that is made at nuclear plants. If we continue this zero-nuclear status and if we make efforts to promote renewable energy and invest in energy-saving technology, I think it’s possible to live without nuclear,” Kawai said.

This week, Japan will mark the anniversary of the deadly 9.0-magnitude earthquake and tsunami that devastated the Tohoku region on March 11, 2011.

The natural disasters killed 15,884 people and left 2,636 people still unaccounted for, while spawning huge waves that knocked out the cooling systems at the Fukushima plant, leading to three reactor meltdowns and hydrogen explosions that spewed radioactive material over the vast farming region.
The plant remains volatile and engineers say it will take four decades to dismantle the crippled reactors.
Protesters in Tokyo stressed that Japan can live without nuclear power because it has been doing so ever since most of the nation’s 50 commercial nuclear reactors were taken offline over renewed concerns about nuclear safety caused by the man-made disaster. Two reactors in Kansai were temporarily restarted afterward but are currently offline for maintenance.

In a light-hearted approach to get their message across, musicians performed using electricity generated by huge solar panels at the park, while dozens of merchants promoted products made in the tsunami-hit region.

The rally also featured stars like composer Ryuichi Sakamoto, who played the music he created three years ago to mourn the victims of the disasters.

Although no one was reported to have died as a direct result of the Fukushima disaster, at least 1,656 residents have died from complications caused by stress and other conditions developed while living in temporary housing. Thousands have lost their jobs and property and remain homeless.

Tokyo resident Michiko Sasaki, 80, said the nation’s priority should be to think about how to end nuclear power and rebuild the Tohoku region.

“In this small nation of ours, there are so many nuclear plants. We are prone to earthquakes,” she added.

“Unless we end it now, what will happen in the future? Politicians must think about children of the future,” she said.